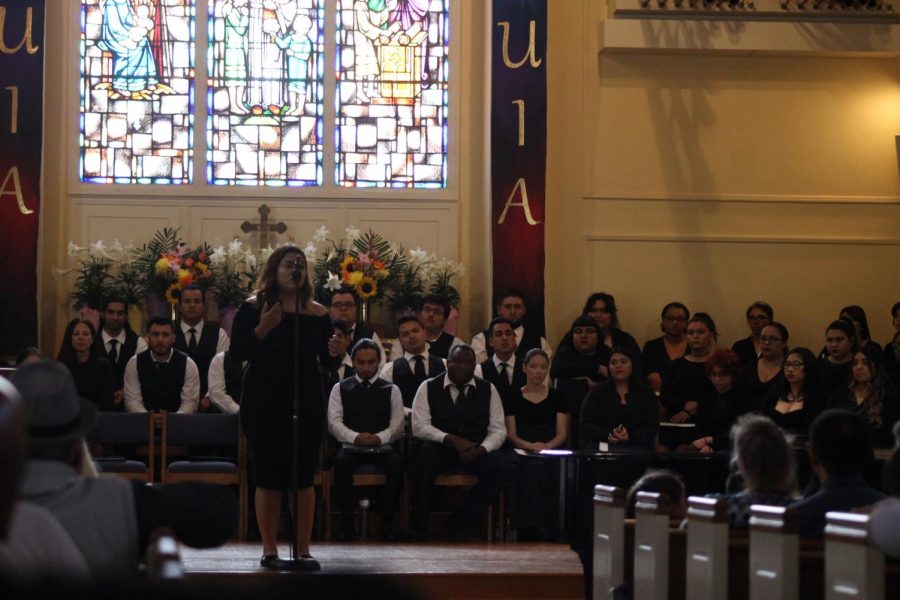 The Cerritos College Music Department and the Cerritos College Choir along with selected associated student soloist presented the 13th Annual Spring Sing Concert on April 28. The concert was held in Long Beach at the California Heights United Methodist Church.

The lovely melodies soothed all ears in the nearby neighborhood and also those listening inside the church for not one penny at all.

The event was guided by Anna DeMichele, director of the Choral and Vocal Studies Program at Cerritos College.

The concert featured songs from many different musical genres. To name a couple that stood out, the opera and jazz, considering one wouldn’t think that those would be in the same concert.

Selected soloist featured in the concert was a way to broadcast the hidden talent amongst us here on campus.

DeMichele stated how pleased she was about the event and its success. She added that the students all did a wonderful job.

Given that the soloist had to audition and didn’t have to be in the choir, she expressed how offering students this opportunity is a good way to broadcast the hidden talent amongst us here on campus.

Without the slightest idea of what to expect from the concert, the experience was delightful the talent was impressive. Voices that one would have thought to be heard in a Broadway musical.

Each genre gave you its own vibe going from upbeat folk and traditional that made you wanna tap your feet, to songs from the Musical Theater stage that one is very familiar with.

When asked what was her favorite song of the night, DeMichele said, “I love them all but one of my favorites is ‘Someday’ from ‘The Hunchback of Notre Dame’ because it is a pertinent message especially for what we go through in the world today.”

Something that stood out at the concert was the fact that in the world we live in today with everything being recorded or captured, those that were in the audience did not participate in much of that. It seems as if the crowd was captivated by the angelic voices of the choir and soloist.

One musician Weyling Elvir a member of the Cerritos College choir who when asked what was something that she took from the experience stated, “Preparation is key, at times while practicing way back in January I wondered why so soon. But in seeing how well we all did, it is most certainly worth it.”

If one wants to be apart of the College concerts, either on stage or in the audience, the Music Department always has events offered at or near the college.

The next upcoming event will be the Choir Band Orchestra Concert, which will be held on May 17 on campus, providing the college and community with a fun-filled experience.