Dance students use Zoom to adapt to the rhythm of quarantine 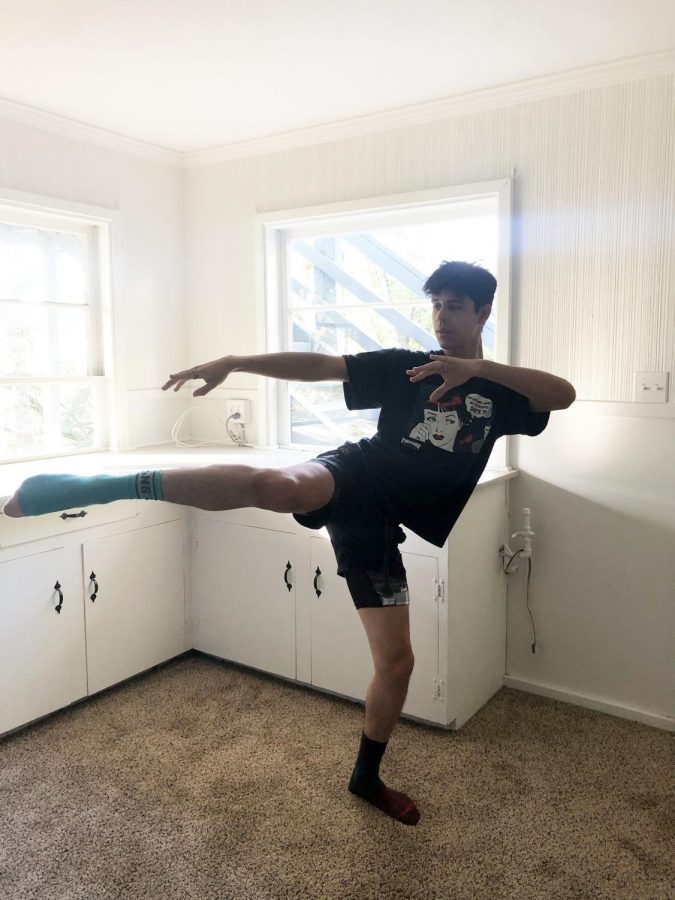 Samuel Macias, dance major, has been dancing from home due to COVID-19. He finds a space at his home to take his zoom dance classes. Photo credit: Courtesy of Samuel Macias

COVID-19 has affected performance-based dance classes. It has been quite an adjustment for the dance students to transfer to online classes.

Samuel Macias, dance major, expressed he enjoys being able to dance during these times, stating “the biggest challenge is I’m at home so I find myself lacking motivation to set up my Zoom class and dance.”

Macias expressed that even though he has lost some motivation to get up every day and dance, he is “inspired when my professors just do the best they can to make it as normal as possible is such a crazy time.”

“Ballet requires a bar to use, so not having that makes it hard. The space is a challenge, too, because I am constantly hitting my feet so finding a good space is really hard,” Macias said.

He shared he enjoys still being able to dance and seeing his friends and professors through Zoom.

Daniel Berney, dance professor, mentioned that an advantage he had when it came to accommodating his classes to an online format was that he was already using Canvas to teach dance history and dance appreciation online.

He mentioned that the ballet class students already had a Canvas folder where they would do quizzes and concert critique.

“They were already comfortable with being in Canvas. Basically what it led me to do was reformat a lot of the assignments into Canvas,” Berney said.

Berney stated that for a ballet class, the breaking point of exhaustion is about an hour and a half, so his online classes usually runs for that amount of time.

It is a time frame that is really efficient for the students.

According to Berney, “We’re not in the studio environment where we’re taking a break, getting a drink, putting the bars away, it is just constant.”

He mentioned that even if there is less in terms of engagement and even if students are not getting the full two hours, they have more work on the site now that they have to do.

“I am not making assignments due right away because I know this is a new landscape for students and just so they get everything done in a timely manner,” Berney said.

A challenge, according to Berney, is that some dance professors had to go on a fast learning curve to learn how to use Canvas to have a place to put their assignments.

Berney expressed he had to invest in technology to be able to successfully teach through Zoom.

“Out of my own pocket I had to go buy a tripod, an HDMI cable, an iPod because I had to use my phone for the Zoom because my computer wasn’t going to be able to see me completely when I’m dancing,” he explained.

He mentioned another challenge for himself, as well as for his students, is trying to find a good space to dance at home.

“The students are working in their living rooms, bedrooms, environments that are not realistic,” Berney said.

Berney explained that his ballet class was, for the most part, able to accommodate because it can be relatively taught in place but they have lost a few center combinations since they ran out of space.

“Students seem to be doing the best they can. I don’t have anybody telling me, ‘No I can’t do it because of the environment I’m in’, so that is encouraging,” Berney said.

Not having the adequate dance-friendly flooring has also become worrisome to Berney.

“I happen to have a wood floor, but some of the students have tile or carpet so it is hard. The studios have sprung floors for jumping and dancing on”, he said.

“I do not want them being compromised with their lower extremities so we have to modify the amount of jumping that we would normally do in a class based on the fact that we are in an environment that is not conducive to dance and jump.”

Diana Avalos, communications and dance major, shared that for the most part she hasn’t had difficulties adjusting to her now-online dance classes but expressed it is more challenging to put in the effort to log in because the timing interferes with her schedule.

She mentioned that the most challenging thing for her is not being in an actual studio.

“For me, being surrounded by people brings me energy and support, so being in my house and trying to do everything in my room gets difficult,” Avalos said.

“I feel better when it is not me just struggling, that it’s several people struggling with the same thing.”

“I try to learn choreography without tutorials. I want to let my body continue learning and letting my mind process things quicker, so that is my goal and motivation trying not to lose sight of my initial goal of become better,” she said.

Avalos shared that her professors have been really understanding, stating “It is really nice to know it is not just you going through that, it is also your professors. One of my professors told us it is okay to be frustrated, mad or whatever we are feeling. It is fine [to] just get up, get a pillow and scream.”

“Being in Latin social dance requires a lot of partner work and it is hard to do that by yourself,” she said.

Mendoza expressed she is also struggling like many other dance students to find a good space at home to take dance classes.

“Continuing dance class online, even though it is hard, continues to keep me motivated because I have a passion for dance and it is my favorite thing to do. Even though I can’t continue it in the studio, I am glad to be able to continue it at home,” Mendoza said.

Mendoza mentioned that she has been able to form stronger relationships with her instructors and classmates.

Throughout these difficult times and changes, she expressed she has learned how to be more vocal and has been open to talk to people about things, which she plans to continue doing when things go back to normal.