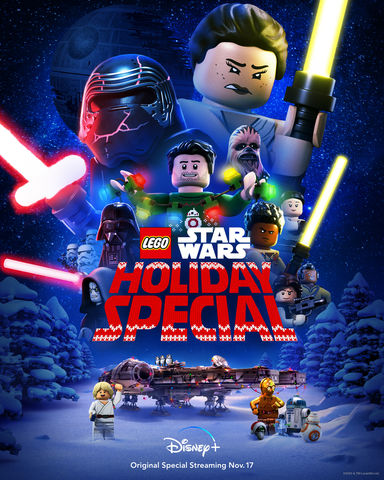 The Lego Star Wars Holiday Special may not be considered canon, but the 48-minute film provides fan service and nostalgia that fans had failed to see in episode IX.

The special is set after Episode IX. Viewers find the characters from the sequel trilogy celebrating “Life Day,” the Star Wars version of Christmas.

When starting the film, the bar was set very low. From past experiences with lego movies, it was expected to be a silly children’s movie.

When it started, however, the movie proved haters wrong with an exciting story and motivation.

The film provides a look back at the prequel and original trilogies, with comedic humor to feel like a family holiday movie. While it may be animated and lego, it provides a sense of nostalgia that star wars fans love.

From Obi-Wan Kenobi’s iconic “hello there,” to Luke and Darth Vader’s final battle, to Anikan pod-racing on Tatooine, the holiday special reminds fans of the “Golden Age” of Star Wars, when the movies had a storyline that made sense.

Rose is even given a more compelling story arc and more screen time than she did in The Rise of Skywalker.

The animation has also improved, most likely due to the funding and animation department of Disney plus. Close-ups of the characters show the attention to detail the animators have put into this project.

The lights and sounds are pulled directly from the movies as well. Rey’s lightsaber makes the same unique ignition sound as it did in episode IX, and the same can be said for blasters and other character’s unique lightsaber sounds.

Viewers might have been worried that Disney slapped a holiday special together for kids. Still, it’s good they are putting the same effort into a lego holiday special as they are their feature-length movies.

The film is also self-aware, making fun of the character’s hairpieces spinning around their heads and repairing BB8 by snapping his pieces back together.

They also address how a second, or third, death star is incredibly derivative and unoriginal, as well as Palpatine’s unrealistic resurrection after dying in Return of the Jedi.

However, like most lego films, it relies too much on comedic humor and exposition.

The movie rips away the intimidation of Darth Vader and Emperor Palpatine that made them such compelling characters in the original trilogy.

Despite its minor flaws, the Star Wars Holiday Special redeems the Star Wars franchise by calling back to the previous trilogies in a way that makes sense to viewers.

Should this be the final Star Wars film Disney produces, fans should be satisfied.

The Star Wars Holiday Special is now streaming on Disney Plus.