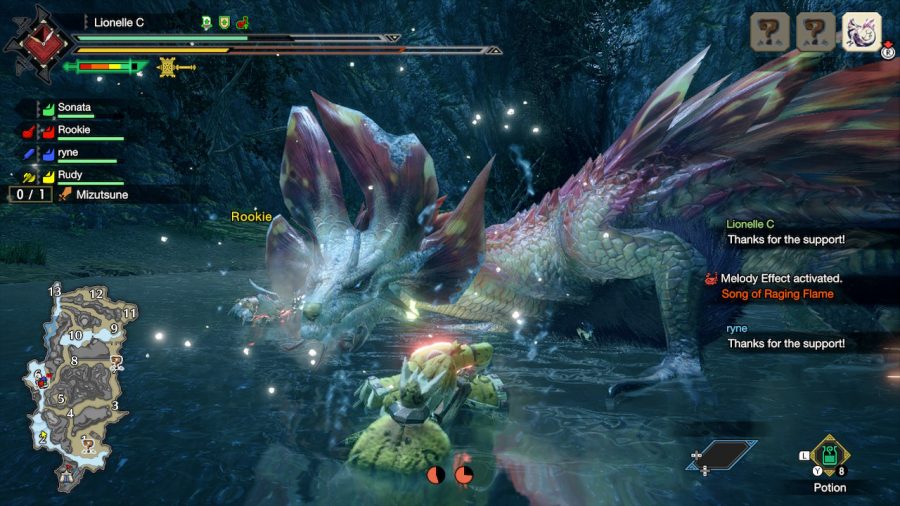 In the middle of a battle between a group of Hunters vs the water Leviathan Mizutsune. Its water beam and bubbles can do a lot of damage, so being so close may not be the best option. Photo credit: Oscar Torres

For many years the “Monster Hunter” series has had a home with Nintendo. With it being one of Capcom’s top series it has had many releases on the big N’s portable devices like the 3DS.

To prepare and get everyone excited for the release on Mar. 26, Capcom was gracious in offering a demo for fans to try out the game and see what they think about it.

Let’s take a dive into the demo and see the positives and the negatives.

Well, first off there are only four missions that the player can do. These missions are basic training/tutorial, Wyvern riding training, Slay a Great Izuchi, and Slay a Mitzutsune.

Keep in mind players can only play the demo 30 times and that number goes down whenever a quest is finished. Also, the online function of this will be disabled after Feb. 1 so playing with friends or strangers would be the most beneficial.

The main engine that is used for this game is the RE Engine which has been used before in other Capcom titles such as RE2 & 3 Remake, Devil May Cry 5, and the upcoming titles “Ghost ‘n’ Goblins Resurrection” and “Resident Evil: Village”

The name of the game is simple: players play as a hunter and it’s a hunter’s job to go out and complete jobs that all boil down to finding the specific Monster and killing it.

It may be a simple task to do but in actuality, it’s very difficult as it takes a lot of strategy and mobility to get up close and personal with the specific monster.

That’s where the wire-bug comes into play. This mechanic will allow a great amount of movement options for the player to use to their advantage. They can use it to either move around on the battlefield quicker, use it to climb hills/mountains and other high places, or use them to improve upon combat. Be warned that using these will deplete one or both of the wire-bug gauge and will replenish over time.

Combat wise the X and A button is used to initiate attacks and pressing ZL+X/A will initiate a wire-bug attack that costs one or two bars of your Wirebug gauge. Pressing B does a dodge move that costs stamina and pressing Y will use an Item(Holding it down and using the right stick will pull up a wheel that has an assortment of equipment ranging from meat and potions).

There are up to 14 different weapons to use ranging from long swords, a hammer, bow and arrows, and great clubs.

My preference is the sword and shield, mainly because it’s good for attacking monsters and being able to resist attacks, making it easier to not dodge a lot and continue attacking.

So far the movement is pretty well done, it’s not stiff, gets easy to handle and the wire-bug, though it took some time to get used to, is a pretty amazing mechanic and one that was smart for Capcom to do. Item management was organized and maps were a great size and easy to maneuver in.

Palico’s and Palamutes are partners that the player can take and both act very differently even though they both can fight monsters. Palicio’s are able to find resources and are quick while Palamutes are rideable so losing stamina is no worries now. Recommendations would be the Palamute as traversing the map is much quicker riding what is essentially a big dog.

Visually the game looks really great in both docked and handheld mode as I couldn’t tell the difference between them. The environments look good and the character models and monsters are so well detailed utilizing the RE Engine to work for Switch.

Frame Rate wise, it’s perfect, as I have not have encountered any dips in frame rates or frame drops it stayed consistent even with a lot on the screen.

The online in this game is pretty good as there are lobbies with up to four people per lobby with each player getting a different weapon and partner and working together as a group to complete the mission and defeat the monster.

With everything being discussed here I can safely say that the demo left me fully entertained and positive. I was having a great time moving around with the new wire-bug and killing some monsters with all the different weapons that I didn’t put it down till 2-3 hours in. It’s that addicting and could be more so if people can get friends to play it.

I highly recommend playing the Demo, and who knows, maybe it’ll get people to buy the full game when on Mar 26. it hits both stores and the Eshop.