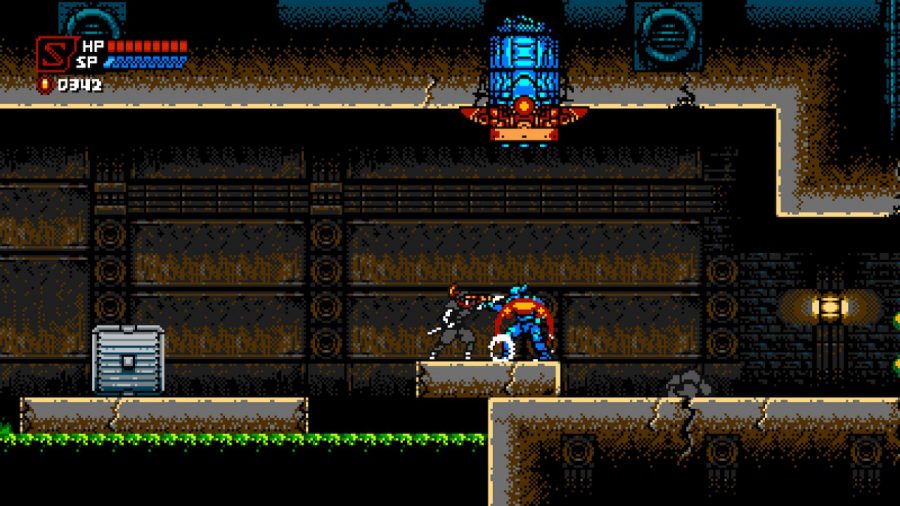 Shadow taking on a lifeform soldier. these things are in every stage and are easy to take down but get surrounded by them and its all lives lost. Photo credit: Oscar Torres

“Cyber Shadow” is both fast-paced action and a stress-inducing challenge that puts your gaming fingers to their limit and rewards with time and practice.

With Mechanical Head Studios working on the project, the game’s sole creator Aarne Hunziker worked together with Yacht Club Games (creators of Shovel Knight) to bring this game to life.

Now with the game finally releasing and in players hands, many suspect that it’ll be a great 8-bit game that is inspired by the games of old.

When describing this game, Hunziker has said that the game takes inspiration from other NES games like “TMNT,” “Contra”, “Ninja Gaiden” and NES “Batman,” taking some similarities but making the most out of those gameplay elements by creating it’s own flow.

The plot is pretty simple as there are little cutscenes with the story and world being told through logs that the player can find in stages.

The plot follows Shadow, a cyborg ninja who survived an explosion that destroyed the population of Mekacity. Dr. Progen has taken over the city with the help of synthetic Lifeforms who destroyed Shadow’s clan. It’s up to the Shadow to put a stop to the Doctor and rescue any remaining clan members that have survived.

The story may seem basic, and even though many plot elements are in stages, many people would just skip those and move on to the rest of the stage, but I liked how Hunziker managed to implement the story in a way reminiscent to “Ninja Gaiden.”

The gameplay is a 2-D action side scroller where the player can traverse to a number of stages, beating enemies and bosses while discovering secrets and upgrades that can help Shadow go further into the world.

Shadow can jump with the B button and use his sword for attacking enemies with the Y button. There are also many different attack that Shadow can use, like throwing shurikens, shooting fireballs or shooting enemies while dashing.

However, players need a full enough meter in order to use those moves so spamming them wouldn’t be wise. That’s a good thing, so that players won’t be overusing these skills, instead relying on their platforming and attacking while preserving meter.

The world is very connected, like how when players get a certain upgrade they are able to open up paths to previous stages and even find essences that can either increase the life bar or special meter.

The stages ranged from being easy to handle to difficult but manageable to stressful, with some really painful enemy placements and few checkpoints. It’s hard to almost be done with one section only for the last part to kill Shadow, taking him all the way back to the start of the section.

The bosses were fun and creative, though a bit too easy as it takes only a few slashes to take down some of them.

The music is spectacular, each track a headbanger. Enrique Martin and Jake Kauffman did a fantastic job on these tracks, all being action-packed or atmospheric.

But regardless of the difficulty in later stages and easy bosses, “Cyber Shadow” managed to bring back that classic “Ninja Gaiden” vibe while also being its own game with its story and characters.

The game gets a 3.5/5. A well-made game that fans of indies and classic style games should give a try.