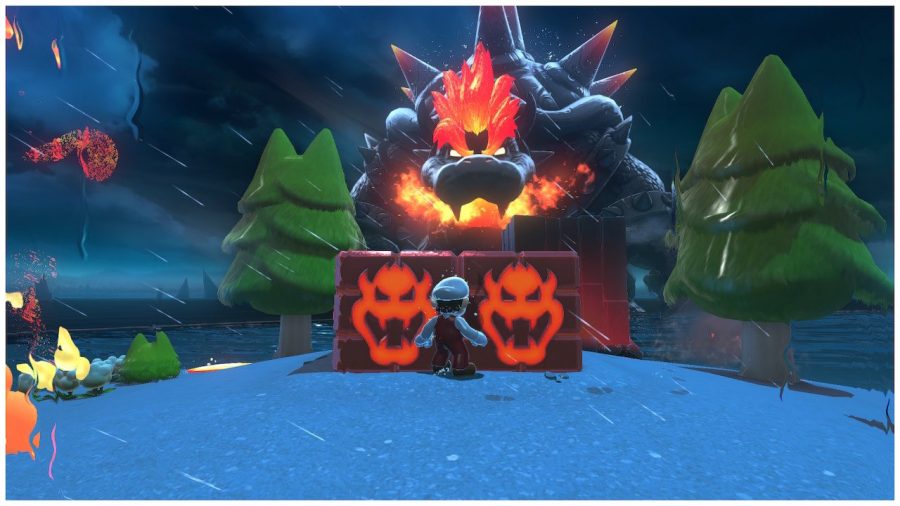 Depending on the blocks Bowser can actually break them with his Fire Breath. this would amount to getting a Cat Shine so that he can leave the world earlier than he should. Photo credit: Oscar Torres

“Super Mario 3D World + Bowser’s Fury” takes the already perfect 3D/2D style of Mario that fans experienced in the Wi U and while adding the ability to take it anywhere people want and an added mode that brings in tons of fun, innovative gameplay elements.

During Mario’s 35th Anniversary last year, Nintendo announced that a port of the WiiU game “Super Mario 3D World” would be coming in February. It’d also include a new expansion alongside it titled “Bowsers Fury”.

During the fireworks festival, Mario, Luigi, Peach, and Blue Toad were walking enjoying the festival where they see a tilted glass pipe in the path.

Mario and Luigi fixed the pipe, a green Sprixie appeared and tells the gang that Bowser has taken over the Sprixie Kingdom and kidnapped the princesses in jars. After she explains this to them, Bowser appears and kidnaps her before making his escape to the Kingdom.

Peach goes into the pipe first with the Mario Bros and Toad following into the kingdom to put a stop to Bowser’s schemes and save the princesses.

The gameplay is great, like any other Mario game. Mario and the gang can run and jump to different levels, collecting green stars and stamps to unlock more levels and challenges.

Each character has a specific ability, with Mario being the all-around character, Luigi being able to jump high but is slippery, Peach can float for a while but is slow and Toad can run fast but can’t jump very high.

Each character brings in a lot of replayability that many can try either on their own or with friends.

The level designs are also fun and creative with many levels having a specific theme that feels fresh and not repetitive.

Speaking of friends, the online function is fantastic, with the frame rate high and online being smooth and playable with no choppy connection or interactions.

Multiplayer can get chaotic but that’s what makes Mario games fun with friends, even if they throw you down a hole all the time.

One downside to the game is that it’s too easy. Getting lives doesn’t take skill if people know the 1-UP trick. Not only that but it’ll be easy to go through the game very quickly if people have already experienced it on the WiiU.

Now for “Bowser’s Fury.” The plot is different than the plot of the main game.

Mario was walking down a path enjoying his day when he spots a weird black ink and follows the path. He sees an M shape symbol and gets sucked inside into a new world where everything is either a cat, has cat fur or has cat-like abilities.

He sees Bowser who is black, giant and terrorizing the place. After collecting the shine, Bowser gets hurt by the light of the lighthouse and goes away.

Bowser Jr. explains to Mario that his dad is out of control and in order to free him from the corruption they need to get a bunch of cat shines to get enough strength to take him down. So it’s up to Mario and Bowser Jr. to travel around the Cat Kingdom and free Bowser.

The gameplay is the same as “3D World,” only this time instead of going through smaller levels, the player travels in one big open world with numerous set pieces and obstacle course-type level design.

This is pretty good, as it lets the player get any shine they want to regardless of order or location. They have complete freedom to do what they want, when they want to.

There are 100 shines and players are required to get all of them to get the full ending. Each shine is different, with some being as simple as getting a kitten to its mother to traversing an entire course to the end to get a shine.

Once in a while Bowser would appear and wreak havoc on the player, with some shines requiring Bowser to break specific blocks. In order to get Bowser to stop the player has to either grab a shine or transform into giant lion Mario in order to defeat him.

This is one of the best parts of the game as it can get chaotic when players try to complete an obstacle course or mission to grab a shine before Bowser can attack and take Mario down.

However the game can get pretty slow and frame rate would go down due to having Bowser appear but it’s only for the more serious places. Still, it’s something that many wish to be fixed in the future.

The new expansion is pretty great and shows a glimpse into future Mario titles. Many people would be interested if the new Mario game takes inspiration from this one.

Sadly as much fun this mode is, it’s also really short, being able to complete it in a few hours. When finished there’s no real point to go back to resuming a current game unless players wanna restart in a brand new save file.

Overall “Super Mario 3D World + Bowser’s Fury” is another great game that is getting the recognition that it deserves and having new players experience the game for the first time.

With a new expansion and tons of replayability, the main game will have players continue to experience more and more.

The game gets a 4.5/5, an amazing game for old fans to experience again and new fans to have fun for the first time.