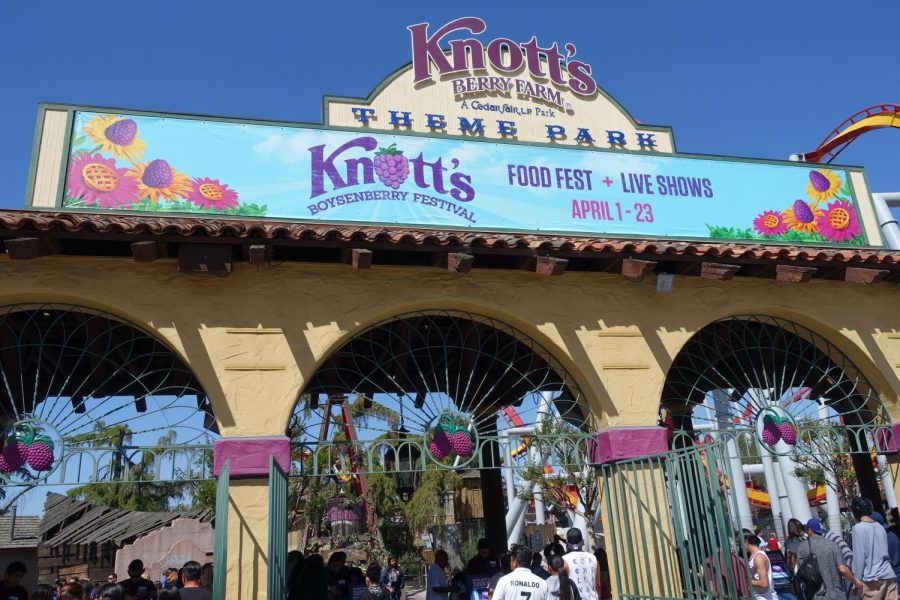 With Knott's closure last year many employees have been wondering what would happen to them. Now with the Boysenberry festival coming Knott's has been preparing their employees to stay clean and make the park clean. Photo credit: Jeremy Thompson/Flickr

It was a year ago that theme parks closed their doors, leaving customers to spend their time watching videos of rides.

But the people that have been most affected by this pandemic are none other than theme park employees, the very workers that help operate the park and makes sure everything runs and functions.

At Buena Park’s Knott’s Berry Farm, the employees have more experience with cuisine and restaurants due to the fact that boysenberries have been popular in the park.

Maricarmen Tinoco, a biology major at Cerritos College, has worked at Knott’s for three years, specializing in the park’s restaurants. She said she would go back in a moments notice.

She works at foods in the gourmet coffee hut near the Johnny Rocket’s restaurant in the park.

She and the employees make sure that everything is cleaned, meaning nothing in the restaurants are subject to cross contamination and if anything goes bad they let other employees know about it.

Melissa Vazquez, who majors in Spanish linguistics, has been working at Knott’s for three and a half years. She also works at the food department in a restaurant. The restaurant is like a fast-food joint with lots of customers

Before the store opens and closes, employees must make sure that everything gets thrown out and the foods are good for the week. Knott’s is very strict about food quality.

Making food is the most important thing that Knott’s has to have all the time besides rides and attractions. Everyone has a job to work together to make sure newcomers get it right.

“Everyone is friendly, they want to make sure they know what you’re doing before they send you out, and obviously there is the orientation, there’s the training. You get paired up with someone who has some experience there so it’s pretty good,” Tinoco said.

On the first day, it can be nerve-wracking for some employees, but for Tinoco the process was easy, saying that everyone wants newcomers to learn and are helpful before they send people out on their own.

Vasquez still works at the park and would be coming back to work on time for the Boysenberry Festival.

When they got the message that the park might be closing… suffice to say that workers got nervous.

Tinoco said that “We all got worried, we were all scared about our jobs and how we were going to manage after.”

The managers and supervisors let them know the day before that all employees will be staying home and would still be paid.

Vasquez said, “I started asking my managers and everything I was like, ‘Hey, should we start worrying about this?’ And as of now, they still didn’t know, if it was gonna hit the US as hard as it was like you hit us. I believe in like beginning like end of February beginning March, we just start implementing a new rule where everyone now had to start wearing gloves.”

Knott’s working conditions are lenient with employees, and seemed to be better than in Disneyland.

When comparing work schedules from Disney to Knott’s, Tinoco says that “I know that my friends told me that Knott’s is a bit more lenient with scheduling your work and if you have somewhere to be they’ll give you the time off.” She also says, “Disneyland is a bit more strict, that they’ll expect you to be at work, they expect you to be there on time.”

Employees were paid for the first month after lockdown and then went up for unemployment. Fortunately, there are still employees in the park, with more coming back home to work in the Boysenberry Festival.

Due to the Orange County stay-at-home order being lifted, this means all employees who have been working at home could go back to work.

Tinoco mentioned safety precautions that the park put in place so that it’ll make their jobs easier, like putting stickers on the floor for lines, and also for wearing masks at all times and not eating or drinking while walking.

She isn’t at all worried about her job, considering that Knott’s knows that their supervisors would pick out the best employees or ones that stick out the most and keep them which is a good few of them.

Vasquez mentions the precautions with also having everything being cleaned every time people finishing their meal or drink.

Vasquez also notes that employees had to refill cups for customers, clean tables, and washing surfaces thoroughly every 20-30 seconds. It was a process that sounded tedious to do but it worked out in their favor as everyone was staying healthy and caring for other peoples well being.

March 14 was their last day for customers. However, employees still stayed to clean up the rides and restaurants, making sure everything was cleaned before employees left to work from home.

Employees still got paid even though their staying at home. However, Vasquez said that “Sadly, we only got paid the last two weeks. And then most of the associates were messaging me and asking me for help with the regular unemployment.”

Vasquez hasn’t been laid off and came back to work in July of last year for their seasonal events. From then on, Knott’s opened the park a bit more for only food, but still with no rides opened.

Employees at restaurants are pleased to have a chance to earn money to keep on living and keep the park operating after a few months of no customers.

Vasquez said about the ride closures, “Just because in rides you’re more in close contact with other people. And because the rides are like two people or four people per lane. And I just feel like if rides were open, it would have been really bad. Like with food wise, we have implemented stickers on the floor. So people know how far they have social distance to six feet.”

She also mentioned that it would be difficult to clean the rides every time, not to mention that it’ll take longer for people to get onto attractions so it was the best decision for Knott’s to do.

For Knott’s, they say they are fully prepared to open at full capacity. That means every ride would open with mandatory health precautions, though it won’t happen immediately but as a process.

Just right on time, since this month is part of the annual Boysenberry Festival, meaning that the park will bring back employees.

With every park being able to open in California on April 1, Knott’s will have to make sure everything is prepared so that COVID-19 cases won’t spike as it opens up with rides once more.

This is a developing story.