Racism towards African Americans in the gaming scene 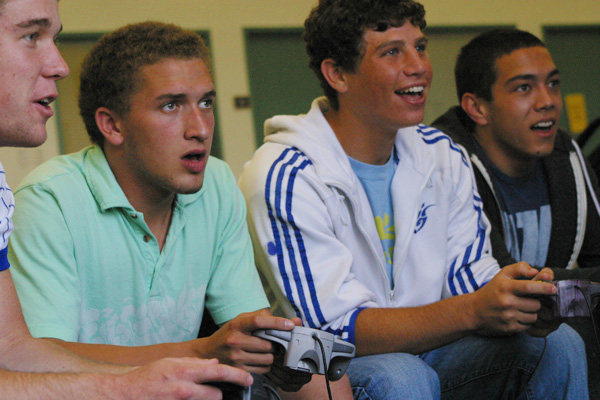 Playing games is meant for one thing, and that's fun. But what happens when racism towards African Americans dives into some of the people's favorite games to play online? Photo credit: Whitney Stanford

As the years go by, gaming has expanded with millions of people getting into it, from either playing or watching other people play games thanks to YouTube and Twitch.

However, it isn’t all that innocent and good, as racism towards African Americans has been around since the presence of online multiplayer.

Whether it’s in an online voice chat on consoles and PC or just when playing games locally, one thing is certain: that racism is and always has been there.

Kihambo, a Youtuber and Twitch streamer, shares his first real experience with racism, saying that in a party that he went to there was a game truck with Call of Duty Ghost. One of the kids who was bullying him called him the N word while using the Hard R.

“I lost. I lost one match. He legit just came in my face and said, ‘Take that N-word,’ hard R. Like no remorse, nothing twice. So I mean, that was probably one of the worst experiences I’ve had with any kind of racism. Things are of course harsher now.”

Stanford Perry has said that he had never had the first hand experience of racism in gaming. But, he does mention that stress is one of the biggest reasons that people let out racist things.

“In all honesty… It could also be the fact that when in terms of being you know, to the Internet, and all that you’re not doing it face to face, there’s this sort of level of, of being able to be unhinge and fully you know, just let it let that anger go. Unfiltered anger because essentially who is really there to stop you,” Perry said regarding stress.

Taking this into account, it seems like playing games and getting stressed probably one of the reasons why people act racist with no remorse.

It’s not uncommon to see when someone gets angry at games to let out things that they weren’t supposed to say. Like for example a video on Pewdiepie while playing PUBG got frustrated and said the Hard R.

And even then when people say racist slurs in games they would end up getting away with it just because it’s easier to online.

Kihambo said, “Well, the thing with consequences [is] they won’t change what they do. They won’t change who they are online, I’m talking, maybe it feels in person because now they’re in your presence. You can do what you can kind of do, what you want to punish them for it. But online, you can get away with so much. There are things you can say, you can do.”

It is easy to avoid consequences when people cannot know who you are behind the screen and they can just get away with saying any slur to any African American they can. Unless it’s a popular Youtuber or celebrity saying it, it goes unpunished.

Even then, the more popular the personality, the fewer consequences it seems.

However, on Twitch’s side, there’s a diversity of Black streamers representing the African American gamer community. However they are not really dominating the trending pages and instead are people that don’t do gaming or women in skimpy clothes getting attention with Twitch not doing anything to fix that dilemma.

“Usually, I see Twitch nowadays and it’s kind of festered up with a bunch of people that don’t really do gaming anymore,” Kihambo said.

Perry replied with how their priorities are mixed up not focusing on the bigger picture. “Their handling of racism was a bit slow, they had banned the term sim before they had banned you know, the N-word with the hard R. It’s a step forward, but at the same time for them to take that long to actually, you know, stop all the actual racist and hurtful slur, it kind of shows the priorities.”

There are many ways that people can tackle racism when playing a game, with Kihambo and Perry they would end up muting or ignoring him and just beat them in a game since if they react to the slurs then the person whos saying it would win the argument.

“Well, there’s no guarantee that someone’s going to make them feel unwelcome because again, there are racists out there. That’s, just one thing you should definitely keep in mind. But that’s not to say that you shouldn’t take pride of where you come from.”

He continued saying, “I think pride is one of the biggest and most powerful traits anyone can have. If you’re prideful, no one can take that away from me. So yeah, you can look to other people to know, you know, give you some, some comfort, find people to confide in. If you’re having problems, you should definitely make friends online.”

Perry explained “I think just more filtering and more ways to, you know, be able to find people, people that get away with this sort of unhinged behavior, where you try to talk things out from people who see gaming like this, it’s sort of escapism, it’s been saying, you know, I don’t like politics in my games, when yet yeah, every almost every story in the world has some sort of either political meaning or, you know, meaning about human nature. Even the basic stories, like, you know, going a little off-topic, like Sonic was how his nature versus man, mankind of thing.”

Gaming is intended to be one thing: fun. And everyone no matter what race or gender they are loves to play games and working together to make gaming safer for others is one step in creating a healthy environment for all.

There is racism everywhere but if people or other people in the community work together to create that environment that they want, it’ll be better compared to a while back.