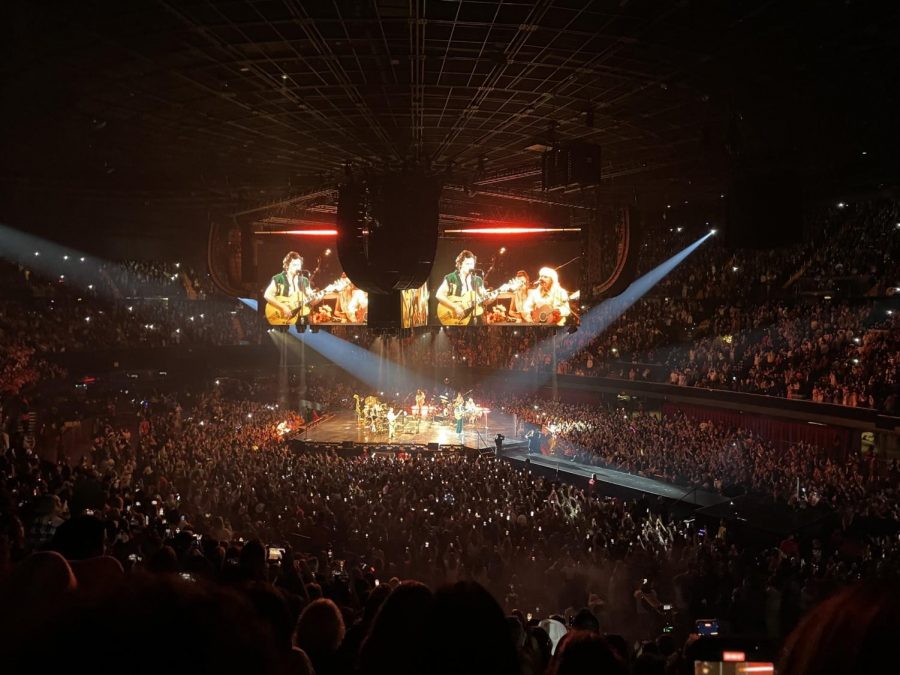 Singer Harry Styles performed in Los Angeles for three sold out nights from Nov. 17 - 20. Styles' fanbase was moved by the way he performed his incredible falsettos, choreography and with his hard working instrumental team.

If you’re ever curious who the dream man is, the answer is Harry Styles.

Starting off his tour in Nevada, charming Harry Styles concluded his Love On Tour with three sold out shows at The Forum in Inglewood, CA, with a supportive and fully masked audience complying with COVID-19 guidelines.

Starting off in the British music competition The X Factor, Styles has proved to the world how powerful of a singer he is, ranking 82 in the top contemporary music artists.

Indie star Jenny Lewis performed her opening to warm up the crowd with an amazing vocal and guitar performance at The Forum, which left fans ecstatic to hear every song she had to offer.

The moment Styles rose from the middle of the stage at The Forum, fans shook the stadium with their screams. It was the most beautiful experience to see the singer who means so much to them right in front of their eyes.

Fans of Styles, called Harries, have emphasized how Styles has positively impacted their life through his music, personality and heart.

On Nov. 17, Styles helped a fan for the second time on his tour by the name of Brenda come out to her mother. Styles left the fan emotional at The Forum and in tears, considering it was a moment of freedom for her.

Styles is a selfless person with a heart made of gold, which is clear to see because of how he takes approaches in helping his fans feel free and love themselves.

Styles encourages people to wear what they feel beautiful in and not label themselves, the same way he’s dressed in ways to break the shell of toxic masculinity and social norms. Fans attending Love On Tour showed up in stunning outfits with bright colors, glitter and whatever they felt the most beautiful in.

The moment a fan walks into a show of his, they automatically feel comfort and peace because they know how Styles would do anything for his fans. There’s abundant proof of him constantly establishing a connection between himself and his fans throughout the tour.

Styles ensures to maintain eye contact as he looks into the eyes of his adoring fans, leaving them with a memory they’ll never forget. There’s not a single ounce of negativity in the venue where he performs.

Styles is the reason why some fans even get out of bed in the morning. He brings hope to the souls of those who need it with his aura, his charity work and appreciates the love and support he receives.

At The Forum, charming Styles gave his 100% as he performed songs from his album Fine Line and One Direction. As Styles gave an encore, fans screamed for him to come back on stage as he surprised them by performing his song called Medicine.

Styles wore attention-grabbing outfits that consisted of flare pants, a glittery black coat and the perfect shade of green in corduroy. The vocals throughout his performances were absolutely beautiful to say the least, and his fans were moved by the amount of talent he has.

On behalf of the Harry Styles fanbase, I’d like to say two sentences. One, we love you forever and always will. Two, thank you for existing and being the reason why we exist.