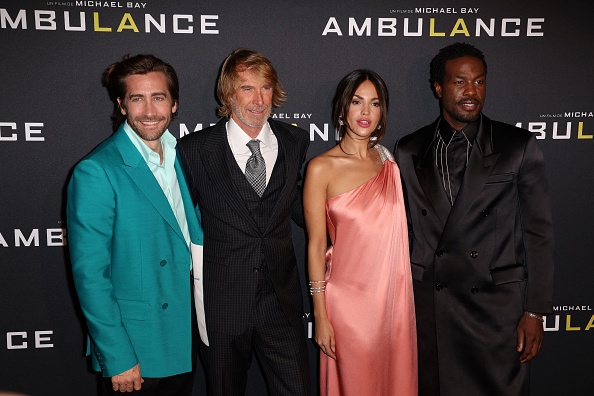 (From L) US actor Jake Gyllenhaal, US filmmaker Michael Bay, Mexican actress Eiza Gonzalez and US actor Yahya Abdul-Mateen II pose during a photocall for the premiere of the film "Ambulance" in Paris on April 20, 2022. (Photo by Thomas SAMSON / AFP) (Photo by THOMAS SAMSON/AFP via Getty Images)

Ambulance is a post-heist car chase movie that follows a world-renowned bank robber and his adopted brother, who faces the problem of his morals, all while running from police.

Yahya Abdul-Mateen II plays Will Sharp, a family man who is unfortunately tasked with trying to obtain thousands of dollars to pay for his wife’s medical bills.

He meets with his brother Danny, played by Jake Gyllenhaal, who doesn’t give him a loan, but instead manages to convince him to go on a singular heist to pay off the debt.

Somewhere along the line, the robbery goes off plan and forces the two to hijack an ambulance that carries EMT Cam Thompson, played by Eiza González, and the bleeding officer, played by Jackson White.

A rather straightforward movie, its two-hour runtime has you wondering, “How does it fill all these empty spaces with nowhere to go?” The answer is that with a linear plotline, its outcomes are very predictable and cliches are apparent, which makes the events seem less exciting.

Every character out of the main three causes unnecessary problems that drags out the runtime and gives an excuse to add car flips and explosions. The side characters make it frustrating to watch, which in return has you rooting against the side of justice. The supposed “good guys” are just unbearable to watch in the movie.

The editing can be seen as repetitive. After the first couple of drone shots, it gets stale and stains the movie.

And for an action/thriller movie, most of the jokes seem out of place – which is concerning for the amount of comedy there is in the film. This just makes the movie experience a bit awkward.

For a movie with a budget of $40 million, Ambulance is a project that Michael Bay wanted to put out after being confined by the pandemic without any motive of making it his top movie.

However, for the average movie watcher, the action scenes are very fun to watch. It’s a good way to mindlessly enjoy the film. All of the stunts and chase scenes are completely practical and are the best part of the film.

Jake Gyllenhaal displays his efforts of being a top actor, and every scene with him makes the movie worth watching. Danny is sophisticated, yet sarcastic and crazy. From loving his brother to his psychotic episodes, Gyllenhaal’s character gives off a spectacular show of performance.

Also coming from award-winning shows and movies such as HBO’s Watchmen and Candyman (2021), Abdul-Mateen plays his role very well as a humane bank robber who was dragged into an unfortunate situation. You feel sympathy for the character, and the movie makes you want to believe that he’ll make it out of the situation alive.

However, Eiza González’s character Cam is written to be their savior and hope for getting out of the situation. The script forces the narrative that without her, there would be no chance of escaping.

It’s surprising how well they use such a confined space and stretch it out for so long. After previous films were heavily criticized by reviewers, the movie is seen as a redemption for Michael Bay.

“Ambulance” is not a masterpiece whatsoever. If you’re looking for perfect cinematography or your next favorite movie, this movie is not for you. However, it offers a completely enjoyable movie experience that’ll make your time worth spending.