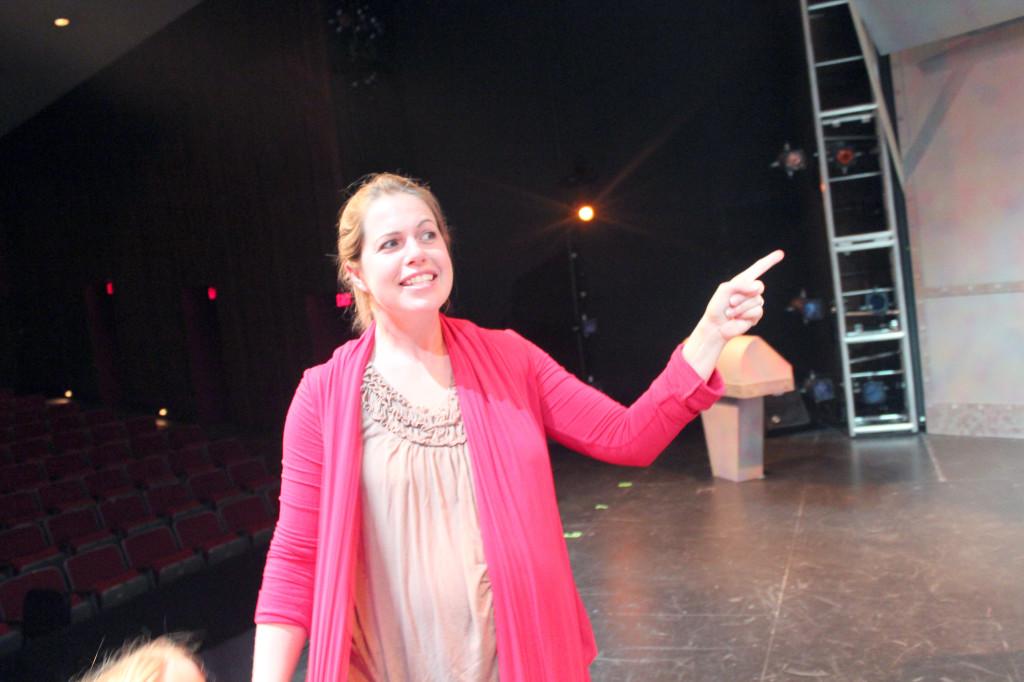 Choreographer Kelly Todd directing her dancers during a rehearsal. Todd choreographed "Return to the Forbidden Planet."

“Return To The Forbidden Planet” choreographer Kelly Todd was awarded a certificate for Choreographer of the Year.

A theater critic by the name of Steven Stanley from StageSceneLA.com, announced the award online where Todd found out about it.

He enjoyed all three productions, The Who’s “Tommy,” “Reefer Madness” and “Jerry Springer: The Opera,” that Todd choreographed this past season.

“I was really flattered and shocked, I kept trying to figure out what it meant,” Todd said.

She was chosen over 287 shows that ran through Southern California.

With such a surprising honor for her, Todd is also nominated for the Ovation award by the L.A. Stage Alliance for choreographing “Jerry Springer: The Opera,” a show that ran at the Chance Theatre in Anaheim, where she is a resident choreographer.

Already a mother of two and currently eight months pregnant, Todd has twenty years of dance composing for musicals.

Todd hit off her choreography career when she was a teenager; as a soccer player and liking the joys of directing, she didn’t think she would turn out as a full choreographer because she barely started dancing at the age of 15.

“I actually started [choreographing] when I was in high school and choreographed my first full-length show, ‘Grease,’ when I was seventeen,” Todd said.

She thought she was going to become a director, but every time she went to go do a job she was noticed also as a dance composer.

“I got more and more into it. It’s the music that I really love.”

After graduating high school, Todd attended UCLA where she earned a Master’s degree in education and in theater. She went to different studios to learn how to fully understand dancing and choreography.

“I’ve been a high school teacher, worked in colleges and worked with kids of all ages,” Todd said.

Even though Todd is a resident in California, she has choreographed shows in New York, met the Village Live Opera Group and has worked in small stages in New York.

“My most memorable moment was when I [choreographed] ‘Hair’ about two or three years ago at the Chance Theatre. Opening night for ‘Hair’ was fantastic,” Todd said.

Her latest show was “Return To The Forbidden Planet.”

“I liked Kelly Todd’s choreography because it was simple, yet still hard. It was more to the air than anything so it was fun to do an air piece with her.”

For her, preparing for a musical to choreograph is not a difficult task. “I start listening to the music way in advance. When we cast I see what they are capable of and I get to solidify once I know who I’m choreographing for,” Todd said.

She also dances out her work in her house before teaching it to her current show cast.

For being a jazz dancer, Todd has done choreography from tango, swing, hip-hop, balle, to tap. “With musicals you need to choreograph everything you can imagine because shows have everything in it,” Todd said.

Todd described her job not being so difficult.

“Just the hours, a lot of commitment, but I love it so I’m good,” Todd said.

“Everyone thinks I’m crazy because I’m with the kids all day and I work all night, non-weekends.”

The only stress that Todd gets from her job is the new aspect of opening night for new shows.

“You want it [the show] to be perfect; sometimes in the middle you think you know what you want, then you want to chance some things and that can be stressful,” she said.

Having a daily workout and drinking a little wine eases the tension from her stress.

Some of her hobbies include cooking, tasting new foods and attending book clubs.

Having the downfalls of her shows not turning out how she had hoped they would be, Todd keeps on going with her living.

“It’s like being an actor; try to get a job and if you get rejected just keep moving on,” Todd said.

As a choreographer, her ultimate goal is to make enough money to just work a job for that profession.

“I just hope to work for many more years,” she said.

As for now, she is opened for new jobs to come to her path for the passion that she thrives in.