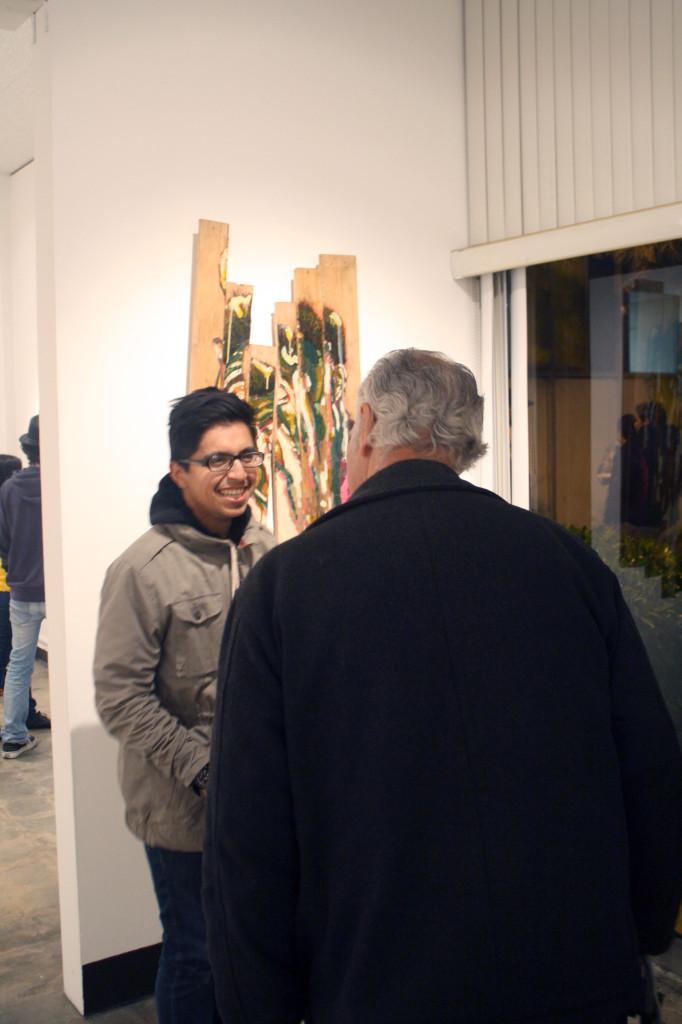 Cerritos College student Galileo Gonzalez (Left) discusses his artwork with a visitor. This is the first piece of artwork displayed in the "Student Spotlight" which opens Jan. 31 2012. 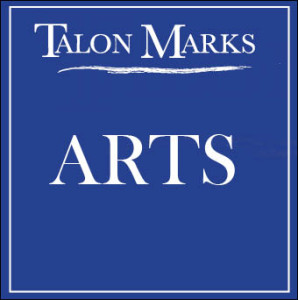 Students, as well as the general public were invited to get a first look at artwork created by 16 artists from around the world.

The Art Club hosted the reception from 5 p.m. to 8 p.m. and provided complimentary Hors D’oeuvres and beverages in the courtyard just outside the gallery.

Once inside, guests were greeted by Cerritos College student and Gallery Manager Joseph Cervantes, who provided music as the receptions’ D.J.

The Director and Curator, Professor James MacDevitt, took time to share his knowledge about each piece with spectators.

He also introduced visitors to the “Student Spotlight”.

This exhibition marks the galleries first “Student Spotlight”, which is a wall devoted to art created by Cerritos College students like art communication major Galileo Gonzalez.

Gonzalez’ piece, is made from a re-constructed cargo pellet that he found at work, and used different colors to paint an abstract image of a man on it, whom is holding his face.

He found his inspiration for the piece while he was a student, working graveyard shifts at a local grocery store.

“It was miserable. It was hell and I was half asleep most of the time. I was more hostile and angrier then. I did a series of paintings based on my graveyard shift and how it made me feel,” he said.

MacDevitt spoke about Gonzalez’s work, saying, “Galileo’s piece attracted me and became the impetuous for the Facial Expressionism show itself.”

Visitors included family, friends, as well as students from other campuses.

MacDevitt commented on the gallery, saying, “It’s good for him [Gonzalez] and the community as a whole, to be able to see the work the students are exploring right now, in their own sort of nascency, could very easily bloom into a full-fledged art career.”

Cerritos College student Mickey Itani described her favorite piece from the exhibit saying, “I love the explosive energy of it.”

Several classes paid a visit to the gallery which served as a teaching tool for ESL professor Norberto Nunez.

“In my lesson plans there was a section on facial expressions and words to describe feelings, and thought it would be great to bring my class to practice some of the vocabulary that we are learning,” he said.

The exhibition is at the Cerritos College Art Gallery and will run until March 15 2012.

The gallery is located in FA50 and its hours are available at www.cerritosgallery.com.