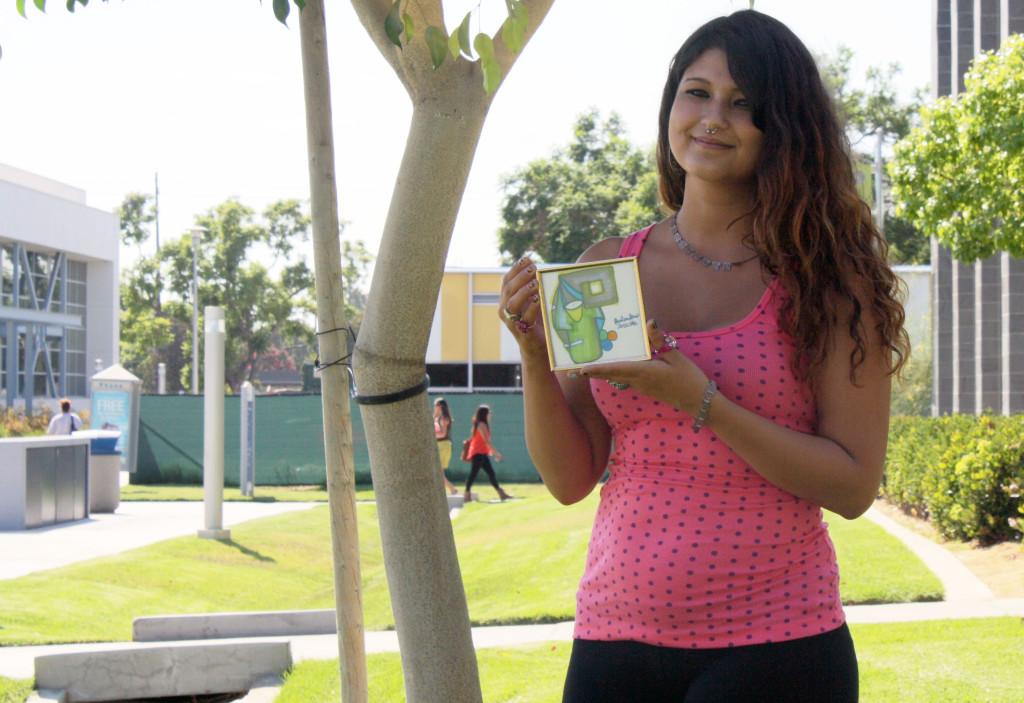 Student artist and art major Paulina Jones holding a piece of her work titled “P Face.” Jones sells her art work online and is working on launching her own clothing line company.

Art major Paulina Jones is in love with her passion for art.

This led her to sell her own art over the Internet to people all over the nation.

“Since high school, I have sold many sketches and colored illustrations to people in many states in the U.S,” Jones explains.

Her art is featured on her website www.paulinajones.com, which redirects to her Etsy shop. All of her art is produced on her own.

Her California Seller’s Permit allows her to sell at Venice Beach Boardwalk.

A friend of hers, Josh Hammonds, said “I can give her (Paulina) a piece of paper with scribbles and she can make an art piece out of it.”

Jones began to produce her own art work around the ninth grade while in class doodling on the side of her notes.

It distracted her from what was going on in her life and it was also a good way to stay busy in class while listening to her teachers.

Her friends encouraged her to continue her doodling.

Soon, the doodling would expand to drawings.

When she got her first sketchbook, her doodling became, “blowing it up with like big pictures and stuff. I just never stopped,” said Jones.

She talked about her motivation.

“Definitely my family. They’re all super artistic and they all have their own kinds of things that they can do so well.”

Her family, as well as famous painters, provide her with inspiration.

One of her aunts took her to a place that exposed her new artistic mediums.

“She took me to some museum that had Monet’s paintings,” Jones said.

Jones’ art work has not limited herself to draw her work on paper.

Some of her biggest art pieces she has created were on the walls in a friend’s room.

Later, one of her teachers asked her to draw for him on a surf board.

“When I was in high school one of my teachers asked me to do a surfboard for him. It was no big deal.”

She explained, “That’s (the surf board) probably one of the biggest things I’ve done.

“I spent a lot of time coloring on there and it was just a plain surfboard.”

Her teacher wanted something drawn that represented his family.

“On one side it was him and his wife kind of twirled together and the backside his three daughters.” Jones said.

It took her 25 to 30 hours to complete the surfboard.

Jones is looking forward to expanding her art globally through clothing and merchandise of her own company called SIDEFIRING.

She plans launching her company next year.