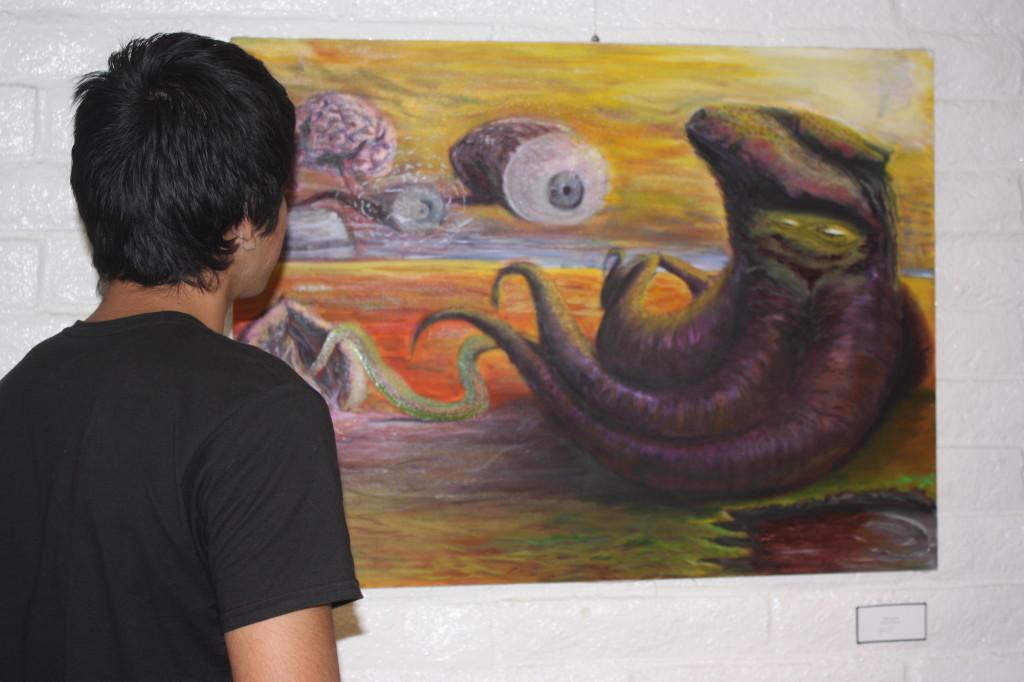 A student from Cerritos College, Edwin Joshua Espinoza has the ability to beatbox.

“Beatboxing is the art combing sounds that are human-like and combine them all together and make music, ” Espinoza said.

Espinoza became conscious of his skill to beatbox in October 2010.

“I was always making noises and altering my voice. I started getting into it, it just hit me,” Espinoza said.

As for the criteria on what makes a good beatboxer, Espinoza said, “There are some beatboxers that can feel it, but don’t work on their sounds. Kind of like speech when you talk. When you speak well, articulate words better and your vocabulary is kind of higher it’s the same in beatboxing.”

Espinoza further explained, “There are some beatboxers who speak better and have better vocabulary than others. It’s because they practice more and their sounds are sharper, cleaner and have nice flow, rhythm, and all around energy.”

His first performance in front of a crowd was at Cerritos College during his speech class.

“It was exciting because I got to show what I’ve been doing on my own,” Espinoza said.

He said that he didn’t express his skill in front of people before performing in that class.

“Keeping it a secret, but at the same time it’s scary. You have people staring at you, then you’re making the weirdest sounds, talking in a weird way, it feels good to be in the middle of it. I was fed with a bunch of energy. Right after, I’m just shaking. I’m just hyper,” Espinoza said.

In order to find his own beatboxing sound, Espinoza interacts with other beatboxers through a software called Ventura.

Ventura helps beatboxers interact with other beatboxers from around the world.

Espinoza beatboxes to many styles of music.

“Hip-hop is great. I love it, but then there are new types of music out there. Techno, dubstep and crazy stuff like juggle music. I’m diving in to all types of music,” Espinoza said.

Espinoza also uses beatboxing to express his religious faith and even beatboxes at church.

“I’m a Christian beatboxer because I express my faith by incorporating it to my music,” Espinoza said.

Espinoza has big plans and ideas that he wants to do with beatboxing to combine it with animation.

One of his goals is to spread beatboxing to other people.

“My wish is to spread it around and people will catch on. I could have others to beatbox with because I’m just learning this on my own. I have to come up with new ways to think about it on my own, just invent on my own,” Espinoza said.

Not only does Espinoza beatbox, he is also a painter.

Espinoza said his best painting is “Squidward,” a painting representing a constant rebirth of the mind and body.

“Squidward” was featured at the student gallery at Mary Paxon Gallery in Norwalk, Calif.

“I’ve been an artist my entire life. I was always doodling during class and drawing at home, but I only been painting since January,” Espinoza said.

Hilario Ramirez, a social work major, has known Espinoza and has recognized his dedication to his art and beatboxing.

“Edwin’s art has always stood out and is very creative,” he said.

Art professors such as Hagop Najarian and Steven Portugal have helped Espinoza discover his artistic potential.

“These professors are amazing,” Espinoza said.

Espinoza relates his art to beatboxing.

“So one thing I learned (from art) is negative space, is the stuff you don’t make the shapes. That’s like at rest like you use the silence as active (for beatboxing).

“You don’t just make silence awkward, you put the silence there so that makes your beats cleaner,” Espinoza said.