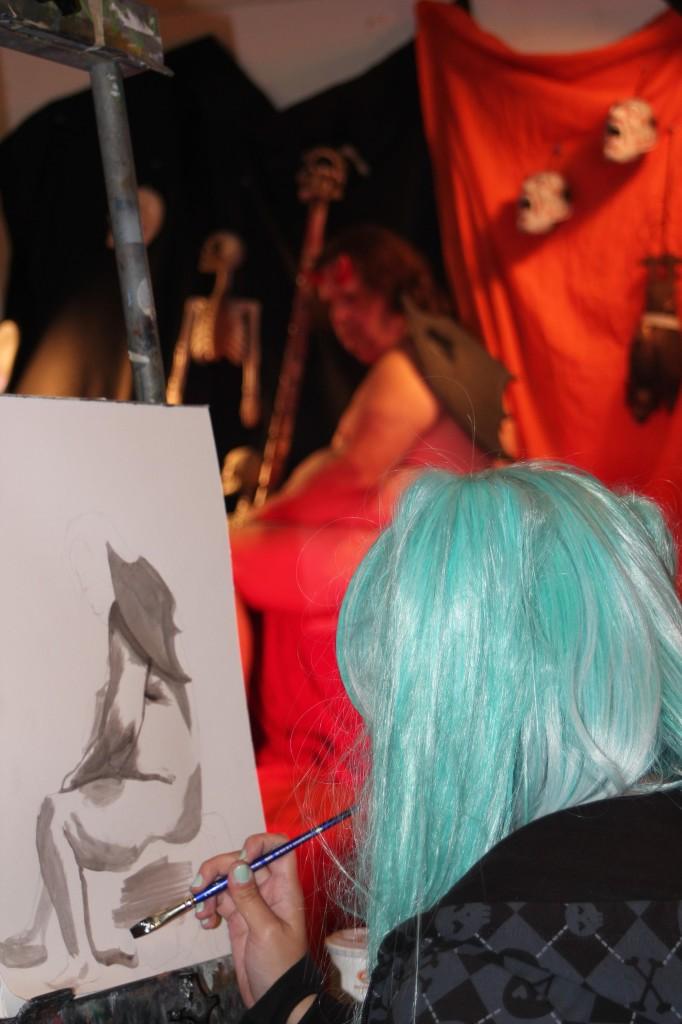 Art major Melissa Duran draws nude model Michael Sscmidt on paper for her life drawing art class. Since the class is on Halloween, the instructor arranged to have a Halloween-themed model to come in to class.

Professor Hagop Najarian said, ”I thought we would take advantage of Halloween and have the model dress up in costume.”

The professional model named Michael Schmidt wore a black wings and used prosthetic horns and a tail in order to look like a demon.

“I’ll glue on the horns and the tail for Halloween,” said Schmidt.

Schmidt also stated that he performs themed modeling quite often.

Schmidt was in a seated pose and held a three-pronged fork, signature tool of “the devil.”

The backdrop for the model contained skulls, crossbones, and pumpkins, as well as a red spotlight which shined down over him.

The students were seated in a semi-circle around the model.

Every student had a different perspective of the model, depending upon where the student was seated. The light shined on the model from different angles which also caused certain effects.

“Every model we put in here we use to draw usually has a different characteristic and body type like skinny, tall, short, male or female,” said Najarian.

“This particular model dressed up in a demon outfit with a tail and horns. I think it’s fine. It’s interesting for the students because, he is not just nude, now they have to think of him as an actual character.”

Art major David Guerrero found the Halloween-themed model challenging to draw due to the fact that the model wore black wings.

“We get used to drawing the body as it is. When we get even a small piece of clothing, there is a little bit of a challenge,” said Guerrero.

“Bringing in the Halloween theme was interesting,” said Bermudeg.