Mark Abbruzzese’s has the best of both world’s: professor by day, rocker by night 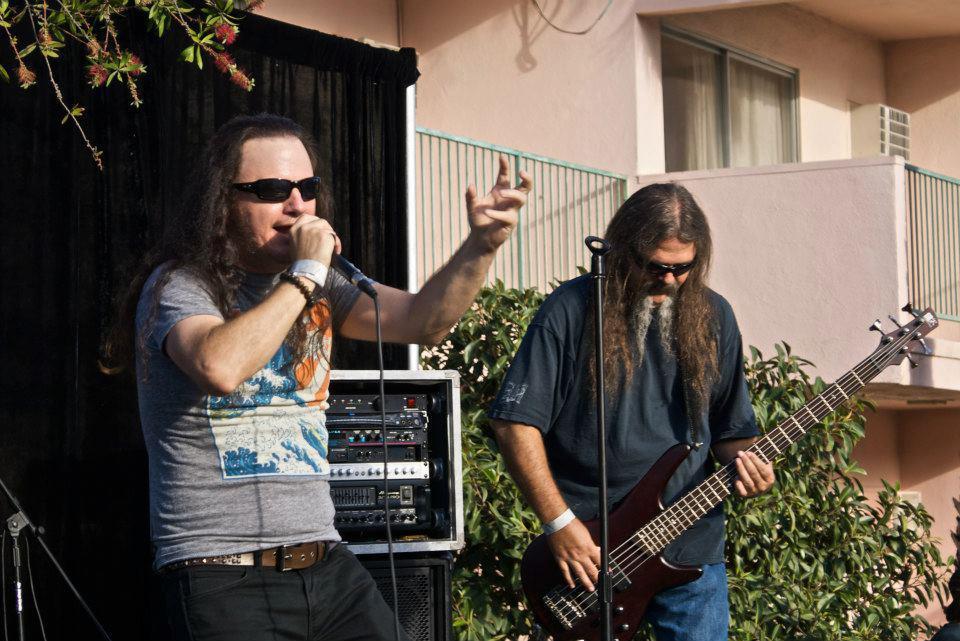 Rocking Out: Professor Mark Abbruzzese (left) teaches Anthropology here at Cerritos College during the week, but at night rocks out with two of his bands. Abbruzzese’s band “Ghost Electric” was recently signed with Wright Records.

During his seven years of teaching anthropology at Cerritos College, professor Mark Abbruzzese not only grades papers during the weekend, but also has band practice with two different groups.

Abbruzzese has been singing for alternative metal band Ghost Electric for five years. The band plays a mixture of sounds such as Pink Floyd, its biggest influence, Led Zeppelin, Queens of the Stoneage and others.

The band has written around 80 songs.

A strong element that can be recognized in Ghost Electric is Abbruzzese’s singing. Although he sings for rock bands, Abbruzzese appreciates singers in all different genres and has interests in many, including heavy metal vocalist Ronnie James Dio.

“Stevie Wonder is my number one influence of all time,” Abbruzzese said, “I like the idea to use the voice in multiple different ways.”

Since June 2012, Ghost Electric has been signed to Wright Records. Its last show was at the Whiskey A Go Go in September.

The person who directed the band to Wright Records is its producer, Franki Doll, singer of Franki Doll and the Broken Toys, after her intern Steve Boyd introduced the music of the band to her.

“To have somebody in the position to produce an album, distribute it and have a deal… it’s a nice feeling.”

Abbruzzese was the first to meet up with Doll to talk about Ghost Electric.

“I was really flattered and happy that they appreciated our music. We’re (members of Ghost Electric) really excited about it,” he said.

The band released an album, with the title as the band’s name, prior to signing with the record company and has now released its second album, “All Of Us Here” through it with the single “Set Me Free.”

“The single is a love song,” Abbruzzese said. He mentioned that the element of the songs is about reminiscing.

“It’s about this idea of a person going through a bad with love and he wants to be set free. Part of being set free from that other person, it’s that it will free him up to go to the next person,” Abbruzzese said.

He continued to say that this song has hope and is not all dark.

A music video of the single will be shot later on. Ideas as to what will be included in the music video are currently in discussion.

The next Ghost Electric album will be produced in the summer.

Abbruzzese and the band almost had the chance to play a show with rock musician Ian Fraser “Lemmy” Kilmister.

“Chances like these come all the time,” Abbruzzese said in a non-disappointed way. He understands that there will be other opportunities to play with big time musicians.

Earlier in Ghost Electric’s path, each member was doing his own project outside of the band.

Wanting to do work on his own project, Abbruzzese grouped a metal band called Keeping Up With the Dead.

The band’s music recordings are currently posted on reverbnation.com.

“It’s metal meets a little bit of progressive and doom. There’s also a bit of goth,” he said as he explained how Keeping Up With The Dead sounds like.

The band has been through other drummers and guitarists before its current members leaving Abbruzzese and bassist John Hubbard as original members. These members have been together since last October.

As the singer, Abbruzzese also includes screams and growls in his singing for Keeping Up With The Dead.

At the end of October, Keeping Up With The Dead played a show with famous English heavy metal band UFO headlining at the Key Club.

“I liked UFO since I was a little kid. My friends and I used to listen to them…” Abbruzzese said with excitement.

Those who are familiar with VH1’s “That Metal Show” know that host Eddie Trunk is a huge fan of UFO. It was no surprise to Abbruzzese to see Trunk at the show and introduced the band to the stage.

Abbruzzese met with Trunk and talked to him.

The last Keeping Up With The Dead show was in December at the Stardust in Downey, Calif.

Abbruzzese mentioned that he and the band may have a chance to play at the South By Southwest music festival in Austin, Texas. The music festival runs from March 8 until March 17.

“It’ll be fun,” Abbruzzese said,”Depending on peoples’ work schedules, we will probably be there for two days. If we get into a really good situation we might play three shows. And if we get really lucky we will play two shows a day.”

Both bands, Keeping Up With The Dead and Ghost Electric, have not been on tour nationwide. They have only played at venues on weekends.

As a professor in a college in bands, Abbruzzese has seen his students know about his shows and has seen them at his performances.

“Its nice (seeing students at my shows),” he said.

After he is done performing he talks to them also about their academic work. “I’m glad that I can reach them in a way with our material in a way, that they appreciate the music we (band members) are putting out in both bands,” Abbruzzese mentioned.

As a musician, Abbruzzese can play the guitar, piano, bass and a bit of drums.

One may ask how a person can be a professor in a college and be in two active bands.

“In terms of having my regular job (being a professor), it’s my inspiration, but I love music,” Abbruzzese said.

“There’s always a way to make this work. I’m pretty disciplined so that works out for me. I can see how that can be a problem if you weren’t on it,” he continued.

Abbruzzese learned from his father that work is a wonderful thing, it influenced him in building character.