Cloudy with a Chance of Meatballs 2 Review 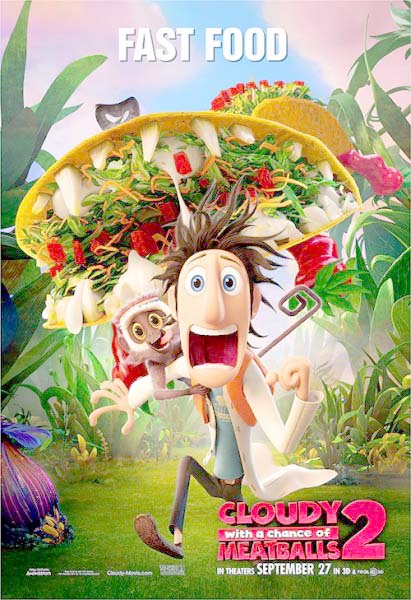 Cloudy with a Chance of Meatballs 2 was released into theatres on September 27th and along with it brought some interesting new characters.

The sequel to the first installment finds the main characters picking up where the first movie finished off, standing in a city full of abnormally large food scattered everywhere.

The second installment’s plot. The character named Flint, who’s in the midst of planning on building a new lab to work in with his friends and family is abruptly stopped by the arrival of his childhood hero, a world known great inventor and main villain Chester V.

Chester V, the villain who will get his own personal gain from sending the main character and his friends into a dangerous second adventure is equipped with just a genius brained orangutan sidekick and personal hologram copies. The series of events that unfold from then on are just fun filled scenes with a wont they feel.

With comedic actors such as Bill Hader, Anna Ferris, Andy Samberg, and Neill Patrick Harris who lend their voices to the main characters of the movie, it is sure to bring laughs on screen. Pun filled dialogue and real world references make it all more enjoyable for children and the older attending audience.

Flint along with his friends go on a second adventure where all the leftover food has turned into adorable animal like creatures that roam around freely on the land that they once called home.

The first installment of this movie, which opened with $30.3 million, according to box office records was beat out by its sequel that opened up with $35 million and was pulled up to first place over other movies released on the same weekend.

Even if the stories plot is something that doesn’t catch moviegoers attention. The colorful clean-cut animation used in the movie will probably be the biggest attention grabber.

With all different types of food shaped animal like creatures running around in a jungle like setting, including the made up landscapes and wildly colorful imageries, it’s hard to look away. The movie itself is just overloaded unique and charming characters and creatures.

Everywhere the characters turn is yet another food like animal. Small marshmallows floating around water, pickles that have an unusual taste for sardines, an abnormally large strawberry with human like qualities and even a hamburger that acts like an arachnid.

Cloudy with a Chance of Meatballs 2 is well worth the money was well presented characters and overloaded with adorableness in every scene and is distinctive from every other released animated movie, G rated and an animated storyline fun for everyone.