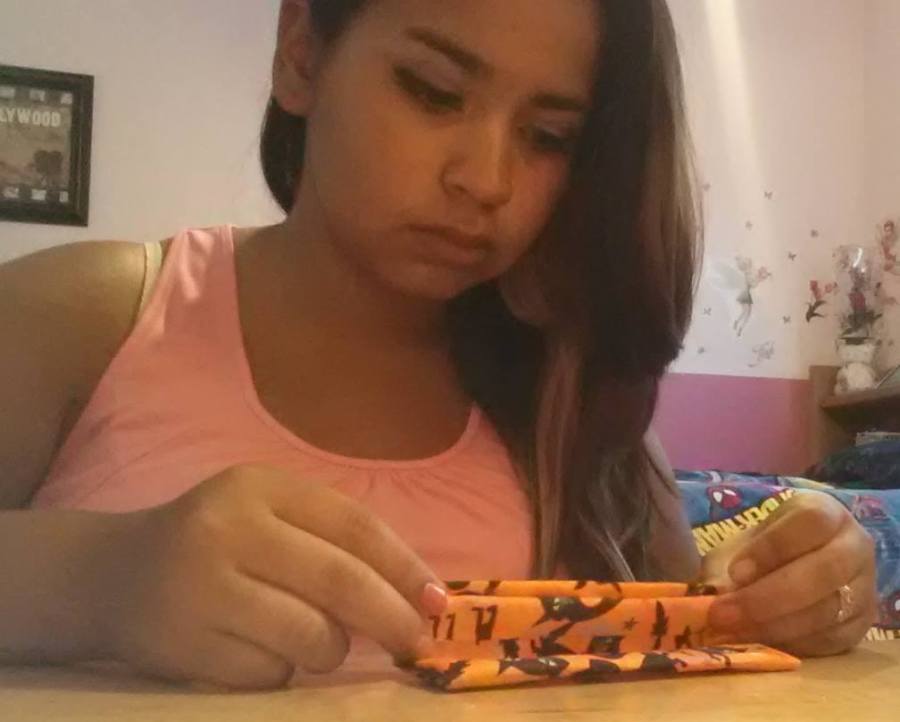 Natalie Romero is like any other student here at Cerritos College, she is studying to become teacher is a member of the Phi Theta Kappa Honor Society and has a G.P.A. of 3.65. She is on her third year at Cerritos College and hopes to get her AA and transfer soon.

But unlike most students here at Cerritos she also suffers from complex regional pain syndrome or CRPS, a neurological disorder.

Romero was diagnosed in her junior year of high school and she recalls that it was a painful experience, “it was somewhat of a relief because I’d been going to two and a half years of being told I was crazy and I went through a time when I didn’t want to live anymore and I didn’t know how to deal with not knowing what was wrong with my body.”

I was walking one day and my knee just gave out and that’s how I got it. And it just progressed and progressed and it spread to my entire body. And they don’t know how it happened.”

Romero recalls, “everybody was running and they couldn’t get me under control because I was choking and I told my mom I don’t remember what happened because mentally I wasn’t there and I blacked out. They had to put me on oxygen and they had to give me a lot of shots of sedatives to calm me down and I believe I didn’t wake up until the next day. they said if it weren’t for the fact that that happened the way it did they wouldn’t have been able to diagnose me. It’s been 5 years now that I’ve had this. And I don’t know if that wouldn’t have happened I don’t know if today I would have been able to say I am a CRPS fighter.

Romero said, “I think the hardest part about living with CRPS isn’t the flare ups or the doctor’s appointments, its accepting that I have limitations and that I will never be the same.”

One in 4,000 people a year are diagnosed with CRPS, although there is not surefire way to diagnose it with 100 percent certainty. A contributing factor is the fact that so little people know about CRPS that on average, people suffering from it will see five physicians before being diagnosed. Another obstacle people face is that they’re told that the cause of the symptoms is in their head.

CRPS can be caused by something as insignificant as bumping into something or as grave as breaking a bone. CRPS is caused by nerve or soft tissue that does not follow the normal healing path.

“They told me I was crazy or that I was just looking for attention I had a lot of friends who said I was faking it and that I just didn’t want to be in school because I was in the hospital so much,” Romero said.

Romero was repeatedly told by her friends and even doctors that it was all in her head, that she was just seeking attention.

Romero describes it a painful sensation of your skin peeling off, while her close friend who also suffers from CPRS describes it as having your blood replaced by battery acid.

CRPS affects people differently, and unlike most diseases it does not have a common list of symptoms. There is also no known cure for CRPS. Every case is different.

Romero said, “[My parents] struggled for a while. He was always in the hospital so they kind of had more attention, growing up. So then by the time they were on their feet, doing what they needed to do, I got sick.”

The first time she was severely was on her brother’s eighteenth birthday, she kept apologizing to him from her hospital bed because she felt like she had taken the day away from him.

Romero has had a lumbar sympathetic nerve block, which was performed to alleviate the pain in her knee due to CRPS. The doctors inserted needles down her spine in the hopes of reversing the CPRS or numbing the pain in her knee but Romero says she might have suffered a flare up on the operating table. She stopped breathing twice during the operation and became violent and had to be sedated by the doctors.

“They [the doctors] told me they had never seen anyone do that.” Romero said.

She walked with a cane for two months and was bedridden for three weeks.

After being cut off from financial aid, Romero had to come up with a new to pay for her school expenses. She got the idea to make bows from her mom, who encouraged her to embrace her creativity.

“I’ve always drawn a lot and for a while I wanted to be a tattoo artist but my hands hurt so much and I don’t have a steady hand.” she said.

Romero buys fabric for her bows out of pocket and then using social media such as Instagram and Facebook advertises her bows.

Romero first relied on her close friends on social media to promote her bow making business. She made a separate Facebook and Instagram account to focus solely on selling her bows.

“The biggest order I’ve gotten is 15 bows and it took me two days. The smaller ribbons bows are two dollars apiece and the bigger fabric bows go for 5 dollars. It’s mainly because its fabric and it’s a bit more expensive. I have to go buy it from my money first. I have to equal out the profit to the expense.” Romero said.

Romero got the idea to spread fliers around Cerritos to gain more exposure in hopes of increasing her sales.

“Mainly I go off of the customer’s opinion because it’s not about what I like it’s more to make them happy because without them it’s nothing.”

Romero can’t walk very much for very long, or stay in direct sunlight but she remains hopeful despite her limitations, “Knowing that this disorder has no cure is terrifying because it makes me think this pain will never stop but if I focus on remission then I have a life to look forward too.”

The assistant nurse at her doctor’s office one told her, “we’re all unicorns, we all work differently.” To which Romero replied, “I just wore my horn backwards.”

Romero encourages those who suffer from CRPS or who think they do to reach out to others about their condition, “I can promise you that everyone with this disorder has given up at one point. The one thing with CRPS is that if it doesn’t kill you, you kill yourself.

Plenty of people have committed suicide because they didn’t know they had it. That’s why it’s definitely important you reach out to people or a support group or you speak to people who can understand your pain. Even if you don’t know that you have it.

I think the best thing to know is that you’re not alone; it’s an important to keep that in mind.”

Michelle Rice, a volunteer at RSDCA, an organization dedicated to providing support to those suffering from CPRS, met Romero on an online support group.

“Having to let go of my old dreams because of RSD(CRPS) has been so difficult, especially knowing I’ll never be able to give birth to my own child, but a big turning point for me has been getting involved with volunteering. I find great joy in being a mentor and advocate for those suffering from chronic pain, but especially RSD.” Rice said.

Cynthia Toussaint, an accomplished ballerina and actress, had her career ended when she tore her hamstring and became a CRPS fighter. She wasn’t officially diagnosed until after 13 years of fighting the disease.

Toussaint came against an obstacle all too familiar to other CRPS fighters; she was told it was psychological problem. She was left bed ridden for 10 years and lost her voice for five of those years.

She founded For Grace in 2002, and has dedicated herself and her organization to helping raise awareness of the disease, and to have a community of CPRS fighters to help others find answers.

Toussaint says, “For Grace’s mission is promoting better care and wellness for women in pain. We women are predisposed to all of the chronic pain diseases, we feel pain more intensely than men and we have a lower pain threshold. However, when we women report our pain to physicians, we’re told it’s hormonal, all in our heads and we’re given sedatives and psychiatric evaluations.”

Since then For Grace has reached out to tens of millions of people suffering CPRS through various media such as local, national and worldwide media (Discovery Channel, ABC News, NY Times, etc.), speaking engagements (Capitol Hill & NIH this year) sponsoring California bills, hosts an annual Women In Pain conference in downtown LA with a worldwide webcast.

Toussaint, like Romero, encourages those who think they have the disease as well as those already diagnosed to reach out, “Even if the CRPS has spread and you might very well have it for life, know that you’re NOT alone and that with support you’ll find a way to reinvent yourself, accept your “new normal” and find a deeper, more meaningful life. It will be the hardest journey you’ve ever known, but someday you’ll be thankful for the gift of the challenge.“

For more information on the For Grace foundation visit http://www.forgrace.org.