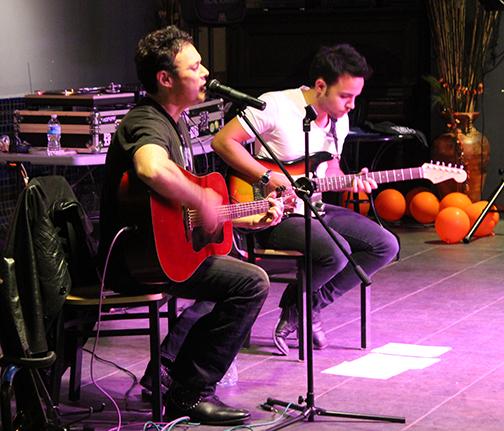 “My friend actually told me about (it). I read her some of my poetry and she said ‘you’re really good.’ She gave me really good feedback on poetry that no one’s ever heard.”

The event was hosted by Dario Serrano, DJ Patrick and Jesse Pelayo, owner of the Leche Cafe.

Serrano, who does poetry, speeches and beat-boxing is part of an art collective, CRASS, or Collective Revolutionary Association of Student in Solidarity.

Many others who signed up for the open mic also felt nervous, but were willing to showcase their individual talents.

“This [the open mic] is the fifth or sixth of its kind. Patrick, who I work with, wanted to create a variety of artists come in here, including art and music.

“So, in a sense, it is the first of its kind because we’ve never included both art, like painting and music,” Pelayo said.

He expressed that his favorite thing about hosting such events is having people around Norwalk come in and express themselves, and being surrounded by people of the community.

Christian Nunez, a drawing major, and graphic design major Oscar Reyes, were in attendance to showcase the Art Society’s paintings, drawing and photography.

The first person to take the stage was Fae Feliciano, a graduate of Cal State University of Fullerton. Feliciano took the stage with a rendition of Lady Gaga’s “Edge of Glory.”

She felt scared to go on at first, but once she embraced her passion for singing, she thought, “why not.”

She added, “I love ‘Edge of Glory’ because it makes you feel on top of things and I want to share that with people.”

“It’s an easy song to play, but I struggled with it at first,” Diaz said about performing “Last Kiss.”

Along with singing and poetry, there was also a rapping. Ivan Oyarzabal, a theater and communications major, went up last minute, and another time when there weren’t anymore performers.

He rapped a song that he had written that very morning.

Before the start of his performance, he urged members of the community and students to get informed on the board of trustees elections.

One of Oyarzabal’s career goals is renovate an abandoned theater to bring a community together by hosting events. By doing so, he hopes to remove political apathy in low to mid-income neighborhoods.

“I’ve got a messed up situation, I’ve got muscular dystrophy, and it makes me think negative; but with hip-hop music, I think positive.”