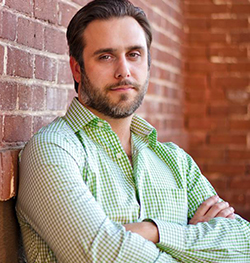 “Choose a job you like and you will never have to work a day in your life.”

For “Waiting For Lefty” director Kevin Slay, this quote by Chinese philosopher Confucius has become a reality in his life.

Kevin Slay is a part-time theatre professor at Cerritos College who is currently directing the featured play “Waiting For Lefty” at the Burnight Center.

But he doesn’t only teach and direct theatre here, he also teaches it at many other schools.

“The really glorious thing about what I do is that my job is my heart and my passion and not (everybody) gets to do what they love to do as their job,” Slay said.

“So, I’m fortunate enough that I’ve been able to figure out how to do that. As much as it is my career, it is also my heart.”

His fascination with theatre is the story telling aspect of it.

His talent for telling stories has come from a young age, Slay loves making the audience that he’s presenting the story to become intrigued and make the people think about what is being told.

He said, “I’ve always liked plays that are provocative and that engage an audience intellectually and emotionally and that provokes people to react and challenge them to what they think they believe or reinforce what they believe.”

And that’s why he is a director.

“But the thing that is most important to me is that I am a director because I like to tell stories, and so that’s what gets me excited; tell stories and work with actors and craft something that an audience can appreciate.”

Slay’s motivation is reading. He said that if it makes him keep flipping the page, that’s when he knows that it is something that he wants to direct for other people; he wants people to get as excited as he gets while watching the play come to life.

“I prepare for my plays by reading the plays over and over and over and doing research analysis and watch things about different plays, historical analysis; I build my own schedules, I stage my shows.

“I am someone who works very (hard to) collaborate with my actors. I don’t come in with all the choices. I give space and room for the actors who are playing characters to make their choices and then I get to work with them and help edit those choices so that the best performance, the best part of the story telling, the most engaging elements, are what the audience is watching.”

Slay’s current project, “Waiting for Lefty,” which was written in the the 1930’s and premiered in January 14, 1935, is about the true events that happened in 1934 in New York during the depression of a series of major strikes that were happening all over the country.

“I’ve always loved ‘Waiting for Lefty,’ I’ve always liked political plays. This is a play that deals with political issues that today we think about much more differently than we did in the 1930’s, like communism.”

He illustrated how perspectives change. He said it’s interesting to see how the view on communism has changed since the 1930’s, to present day.

In the play, “Lefty” is not a character, it is not a physical person. It is the idea of the political left. (Conservatives right, liberals left.)