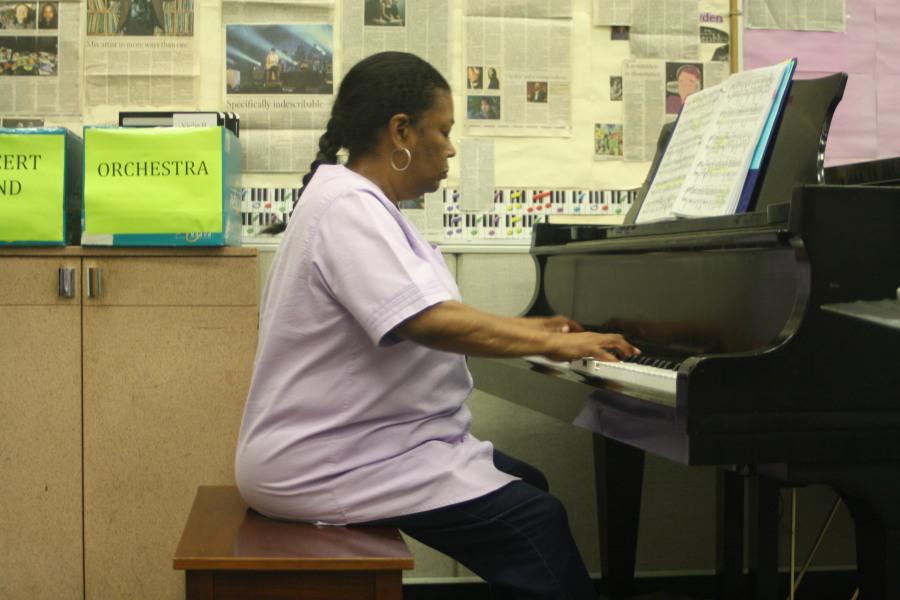 The Music Department has a total of 10 practice rooms and about 180 students come to practice five days out of the week in its piano room.

Not all students come to practice piano, however. Some come to practice for voice, saxophone, guitar, violin, percussion and trumpet practices. But, piano plays an important role for students majoring in music.

“If you’re a music major, you have to have fundamentals. ” music major Zineb Fikri said.

The practice rooms are not open to the public; they’re strictly for music students and students enrolled in the applied music program, which is a program that students have to audition for. If the students get in, they have to perform a recital every semester.

“Sometimes the Music Club will allow students to get together and work on a project, but we’re very careful to make sure that everyone is being respectful and not wasting the room because students are in line to practice and the rooms are always being used.”

One advantage that piano students get is that if all the practice rooms are taken, they’re able to use the classroom pianos – if there isn’t a class.

This all factors in as to why the rooms are not available to the public.

“We barely have enough and we have a designated time and there are a lot of times where we can’t get in because the rooms are taken,” Lorenda Jamison said.

David Reyes added, “It’’s great for other students to practice, as well, not just the applied students, but I mean if you’re talking about messing around, then probably not, because ultimately it’s for us to better our chances into seeking a career, which is the main purpose.”

The students also shared their thoughts on how the practice rooms could use some improvements, like having air conditioning in the rooms and making the rooms sound proof, because students come in to practice for different reasons – like voice practice or trumpet training – and the sounds can be heard, causing a distraction.

The building itself could use some work.

“The practice rooms are probably the nicest, but I think this building in general could probably use an upgrade,” Forrest Holter said.

Besides its cons the practice room has it’s pros – the most important one being it’s a great advantage for students because not all students have a piano at home or a place to practice.

Reyes said, “I have a piano at home, but I don’t always have the discipline that I need when I’m at home, so I come here and I practice here because I know that I’ll get the practice in and meet the required hours when I’m here.”

“It gives us that extra opportunity to focus on what we’re doing, because, you know, resources aren’t always there.”