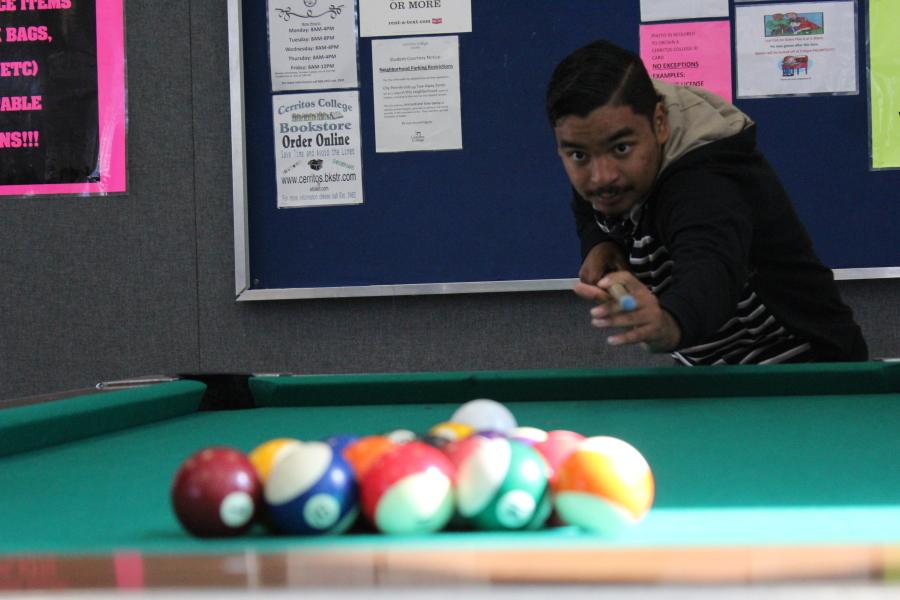 Gilbert Gonzalez, zoology major, starting up the game of pool by serving up and shooting off the first hit. He was playing pool with his other group of friends. He usually comes by Monday and Wednesday. Photo credit: Denny Cristales

For students, the Game Room serves as a neat pit stop between classes, with pool and other arcade games available for recreational use.

The popular choice at the Game Room seems to be pool, or billiards. Students enjoy the competitive atmosphere when it comes to the Game Room, in addition to the social aspect of it, as well.

Some of the arcade games available are:

Jeros Colchado, an administrative justice major, said, “It gets competitive when you meet other people. Sometimes you play Tekken, those arcade games, and people would be like ‘oh, want me to go against you?’ So you actually get to meet those people, while you also try to kick their asses.”

Colchado was with Sandra Rivas, a biology major, who was playing Initial D Version 3, which is a racing game.

There is still the usual student who would play one of the common fighting games found inside the room, like Tekken as aforementioned by Colchado, but pool is largely the prominent choice for people who come by to play.

Most students use it as a place to take a break, or as an escape of the usual norm around campus.

Tristian Escobar, nursing major, said, “I come here in my spare time. I mean, I have to study at some point, but when I have nothing better do, I just come here. I come here to get my mind off of things. It’s basically all I do.”

And that spare time also includes time between classes.

Students typically come in groups into the Game Room.

Alexander Gaspar, an accounting major, was with a group of friends (Gilbert Gonzalez, zoology major, and Jonathan Carmona, engineering major, being some of those friends), playing pool. He usually comes by Monday and Wednesday between classes.

He jokingly mentioned that the only thing that bothers him is the music that plays, but he said it’s “great fun,” regardless.

The social atmosphere makes it an ideal place to just relieve some stress, Carmona and Gonzalez both emphasized.

Gonzalez said, “You can just walk in here and play games with all your friends.”