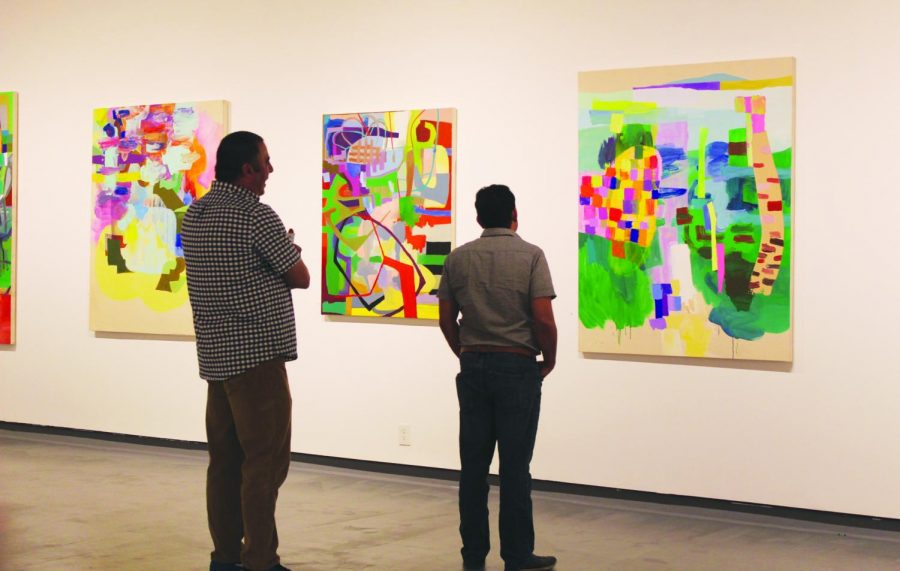 Hagop Najarian, art professor at Cerritos College, showcased his art at Rio Hondo College. The closing reception was on Sept. 30 from 1-4 p.m.

The Rio Hondo College art gallery showcased dozens of art pieces, all of which were abstract paintings by Cerritos College art professor, Hagop Najarian, from Sept. 4 to Oct. 2.

For a Sunday afternoon, the turnout was pleasantly large.

The energy and ambiance of the room was calm and welcoming.

The pieces showcased were paintings that Najarian had worked on for about two years.

Many of the pieces exhibited were made at a residency he participated in over the summer and were influenced by music, Najarian said.

The musical inspiration Najarian referred to was jazz and classical music. Being a musician, he said, helped him create his paintings.

With composers like Stravinsky and Bartok, Najarian said his painting are “in response to the way one feels when hearing” music.

His way of incorporating music into his paintings is “reflecting the same emotions,” people feel when listening to music and people can get whatever they feel off of his paintings.

Najarian described his painting process as the “most liberating…It was the closest to making music for me.”

As well as Najarian’s art work being abstract, he says, “just because they’re abstract, I’m hoping people don’t feel as if they can’t understand them.

“I would ask anyone to think of the feeling you get from certain musical pieces that inspire you.”

Watching Najarian’s work develop over a decade, Miller says he’s always wanted to work with Najarian and took the opportunity to showcase him.

While putting on a solo show is, as Miller said, “a tremendous amount of work,” Najarian had the body of artwork that “has a beautiful flow to it and beautiful movement.”

Miller explains, “when I run this gallery, I look for shows where the work will influence students, so it’s really a teaching gallery.”

Following his solo exhibit, Najarian will be curating the next theme at the art gallery in Cerritos College with art director and curator, James MacDevitt.

The exhibit will be called Ploychromatic mojo: color as content and will showcase on Oct. 30.

As well as being invited to showcase at other galleries, Najarian said, “it has been a blessing for this show and the other one I will be in as well.”

Family, friends and colleagues of Najarian came to the closing reception to show their support.