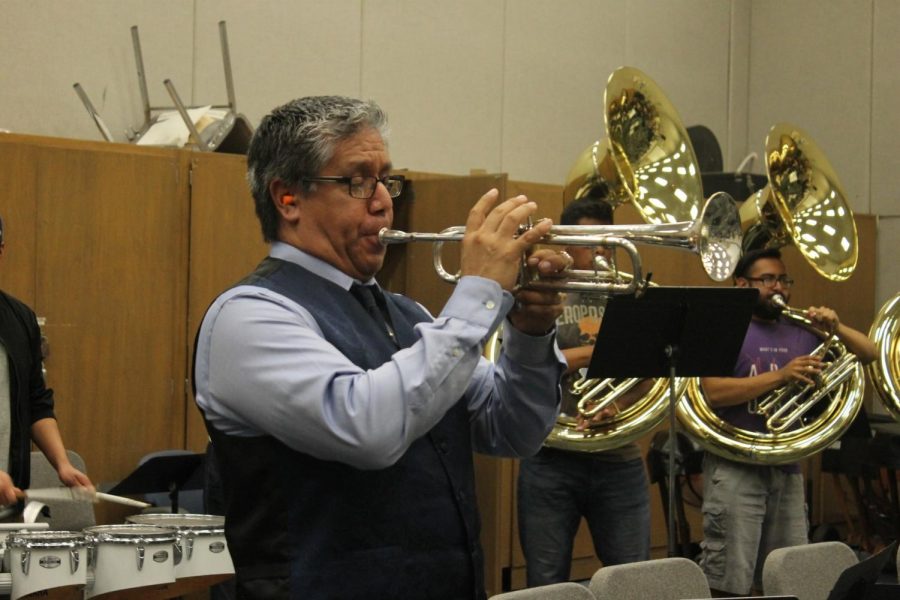 Dr. David Betancourt plays with the Pep Band during rehearsal

The Cerritos College pep band, led by Dr. Betancourt, play at every game and provide that school spirit that is needed to win games. While the pep band carries a lot of history, the students in the band work hard for the pep rallies.

Although the pep band’s main function is providing spirit for the school, they also make sure that they’re exciting and fun to listen to.

The pep band preforms at games, and at other campus events when invited.

“We perform at other events on campus when we can. We like to bring the school spirit to any event,” Betancourt said.

With the pep band being open for anyone to join, it makes it an open and welcoming environment.

If and when students are interested in joining the pep band, said Betancourt, they are placed within their level of skill.

During the fall semester, the pep band practices every Thursday.

This year the pep band has a guitar player, George Lukakis, which gives the band a more distinctive sound.

Lukakis joined the pep band with the intrigue of plugging in an amplifier to his guitar and playing loudly and resounding at football games.

Mars wanted to be that “one cool chick that plays the saxophone.”

Fernando Hernandez said, “I started music in my eighth grade since my football career ended, I got injured pretty bad and I would no longer be able to play football. I decided to go with one of my other passions, which was music.

“I joined the drum line my freshman year of high school over at Rancho High School and did [played in the band] all four years. Once I graduated, I told myself that I wanted to be in a college band and once I saw them [pep band] play, Betancourt told me to join the band.”

“It depends on the song,” what we do to start the season off every year, is we will take about four or five songs that we know we need for games. It takes the pep band about two weeks to really get the songs.

And then every week after that, the pep band try to add about two to three more songs. By the time football season starts, they may have learned six or seven songs. Towards the end of the season they will have close to 20 to 30 songs.”

Lukakis said, “I love that we’re loud, and the way Betancourt directs what we are doing.” He also enjoys the songs they’re playing, which include lot of pop culture music, like Chicano music.

Hernandez said, “This band, we have an amazing mentor [Betancourt]. If he sees someone struggling, he will come and help you. He keeps going and he never gives up and breaks it down for you anytime there’s something wrong.”