Camp Flog Gnaw: better than Fyre Festival, not as good as Coachella 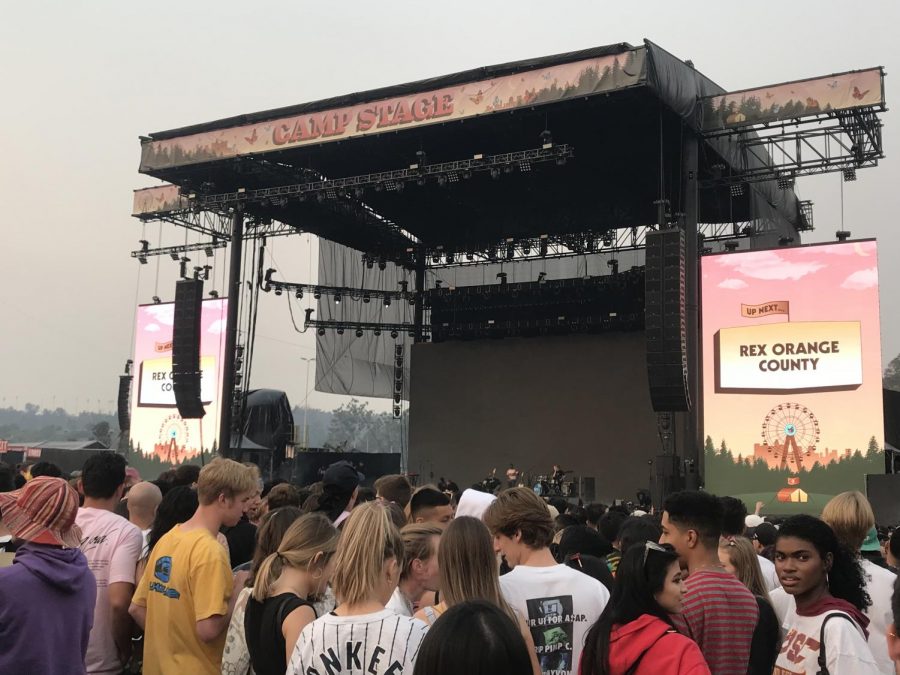 Tyler the Creator’s annual festival Camp Flog Gnaw, had everything from food, alcohol, rides and music.

The two-day event is a special festival that started back in 2012. Wristbands went on sale in May which left fans anxiously waiting for all their artists to hit the stage.

It was not a festival to be shy, all ages and creative outfits were encouraged.

The festival took place in the stadium parking lot, which meant fans walked up and down multiple hills.

Day one was not like any normal festival, check in and security went by fast leaving zero lines.

Only one line was dreadful and that was festival merchandise. If anyone wanted a t-shirt they were told to expect a two hour wait.

Gates opened at noon and the first band started at 12:30 p.m.

There were many photo opportunities, Golf Wang signs, butterfly’s and many backdrops gave the festival a real carnival feel.

Effincey was a factor that fans definitely appreciated. A charging Mophie station was available in case your phone died too soon.

Free water was given out to fans toward the front and back of the stage.

Highly anticipated acts for the night were A$AP Rocky, Tyler and SZA.

During Rocky’s performance there could have been improvements with security.

Rocky is known to have crazy sets with mosh pits and when things got out of hand security was nowhere to be found.

Fans were pushed against railings, some even fell and were stepped on while people started jumping.

Soon after Rocky’s performance, Tyler’s set was being put together.

Thankfully security learned from their previous mistake and cornered every gate and section before Tyler came on.

Tyler opened up singing “Where This Flower Blooms,” on top of a house set up surrounded by trees.

The crowd stretched from the entrance to the stadium club to the Sunset Blvd exit in the stadium parking lot.

Although some people did not have a view of the stage they were able to hear the music and dance freely.

During his performance, he took time to thank everyone for showing up. As fans screamed he said, “I think it’s beautiful that I created something where all you weirdos can come together.”

Most of the songs performed were from his last album “Flowerboy,” only four songs were performed from his 2012 album “Goblin.”

After his performance, he thanked everyone again and hyped the crowd for the upcoming performer, SZA.

Most people left the festival to catch Uber’s but true SZA fans waited for her final performance.

SZA opened up with “Supermodel,” and was shocked to see people still stayed to see her.

She sang all the songs off her “Ctrl” album and shared advice about boys, parties and self doubt.

Exiting the festival was not as chaotic as some may think, the staff was very professional and was able to clear everyone in two hours.

Staff was quick to pick up all trash afterwards to prepare for day two.

Day two was at full capacity and some people who did not show up the previous day came for the final show.

The second day was more prepared, an order-ahead app was available for download to skip the long lines.

Gates opened earlier for anyone who wanted to snag a good spot.

Security was doubled due to the attendance and the L.A. Fire Department had to postpone a show due to the level of the crowd.

DJ Taco was hype enough to make the crowd have the same energy, he said, “I want all of you to be ready for tonight, let’s do this,” as he started the music.

Minutes after Taco walked off stage, a parade of fans started crowding against each other waiting for Hill’s performance.

An hour before Hill came out a DJ came on to take the crowd back to the 90’s hip-hop era.

Hill hit the stage with her iconic 1998 album “The Miseducation of Lauryn Hill,” taking everyone back to the 90’s.

Following Hill was Post Malone, as usual he had a casual set up with a chair and cup of whiskey to drink in between songs.

Before the night ended Kanye West and Kid Cudi performed inside a plexiglass box. They opened up with West’s “Father Stretch My Hands, Pt 1.”

They sang songs off their collaborative album “Kids See Ghosts.”

The audience jumped, sang and threw multiple objects in the air. Even the staff swayed along enjoying their last night.

Overall, Camp Flog Gnaw gave fans more than what they expected. There were some ups and downs, but that is common with any festival. Efficiency and courtesy were shown throughout the staff.