First Japanese Festival at The Pike in Long Beach 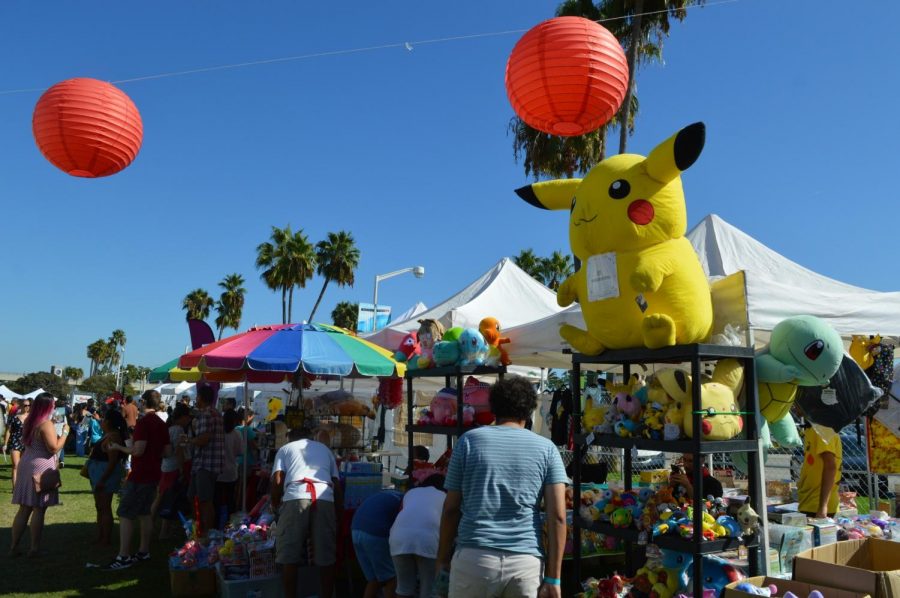 Toys and other arts and crafts popular in Japanese culture were sold and on display during the festival. Taste of Japan, Japanese Festival at The Pike Outlets in Long Beach Sept. 14, 2019.

Taste of Japan, the first Japanese Festival at The Pike Outlets in Long Beach, showcased various Japanese culinary creations, pop culture, shopping, activities, entertainment and family activities for all its guests. The event took place Sept. 14, 2019 from 11 a.m. to 6 p.m.

The festival had many performances displaying different aspects of Japanese culture.

Rafu Mutsumi Kai a performing arts group based in Los Angeles involved many attendees in their performance and demonstrated a sacred religious ritual that is a major part of a Japanese festival.

“We’re very happy to be here at Taste of Japan, we’ve been performing for the last 25 years all over the nation, promoting Japanese culture through Mikoshi,” Keith Nishida a Rafu Mutsumi Kai member said.

“Mikoshi is the Japanese word for a portable shrine, it is a sacred piece that we carry, it’s an integral part of any Japanese festival,” Nishida said.

Traditionally, the people in the village would come together and carry the Mikoshi around town, because not everybody was able to physically go to the temples, the people bring the Mikoshi (portable shrine) to the people instead, Nishida explained.

“The Mikoshi is a symbol of unity, it doesn’t matter what religious background you have or what ethnicity or race you are. The message we want to send out is that we are for unity of all humankind, Nishida said.

“It’s very exemplary of people from all walks of life coming together for one purpose,” he said.

There were many food vendors at the event Sushi Boy, Marushin Ramen, SVR BBQ, Uncle Tetsu and many others. The different variety of Japanese cuisine sold included ramen, sushi, Teriyaki, temmus, milk tea and meat skewers.

VIP ticket holders had the opportunity to taste a selection of Japanese beer and sake in the sectioned off beer garden.

The festival had many family fun activities like bonsai workshops, a goldfish game called Gingyo Sukui and water balloon yo-yo.

Many other products like toys and arts and crafts were sold from different companies including Tanoshii Toys, Heezart, PikaDude and Hanzo Swords among more.

Burai Productions a Japanese Entertainment Group based in Los Angeles California was another performer at Taste of Japan.

Kyoko Okazaki a member of Burai Productions said, “we specialize in samurai stuff, for theater events we usually do [more] fear stuff, but for [live] events, we like to show some comedic moments as well and mix up the serious stuff with the funny ones.”

Since 2010 the production company has been doing live theater and then started doing live events.

Okazaki said they were so honored and excited when asked to perform at Taste of Japan. “We participated in one in Anaheim and that was a huge success and we were so happy, so we were so excited to be here as well,” she said.

“It is very nice, you know, the festival and lots of space and, vendors and, we love the purpose,” Okazaki said.

The event was organized by Tanoshii Project Inc and Treimage event and marketing companies. The sponsors included Sapporo Premium Beer, Getaround, Hiro Sake, Welk Resorts and many others.