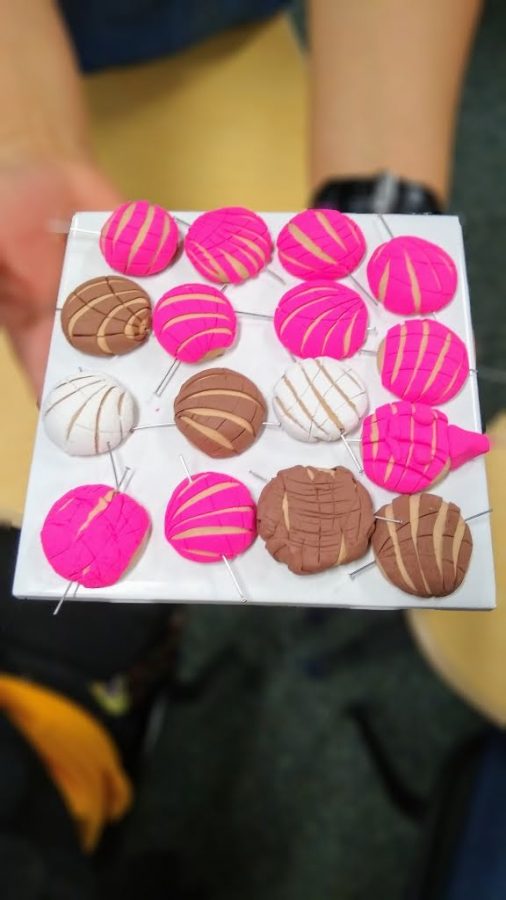 Art in its greatest form, even if it's just a key-chain. Photo credit: Vivian Yglesias

Hispanic Heritage Month is tied in with many events that have students learning about different cultures. An arts and crafts workshop specifically focused on Mexican culture with the making of concha keychains, presented by professor Miraya Palencia on October 3.

The English professor said that the workshop was intended to embrace Mexican culture and how even though people of Hispanic background now live in the United States, people are surrounded by and intertwined with Mexican culture.

“I wanted everyone to be aware of the Hispanic culture and symbols, I just introduced it into a modern age,” Palencia said.

The objective of the workshop was making concha key chains. They are based on real conchas, also known as sweetbread, that are popular in Mexico and the United States alike.

Different colors were offered, such as pink, brown and white. But white could be a little messy as the dust could fly everywhere.

There were six steps to make the key chains.

The first step is to knead the ball of clay until it is soft and press it into a base until it is lump-shaped. The second step is to cut tiny triangles into the color of choice, which was shaped like a circle.

The third step is to place the strips of color onto the clay and leave gaps in between. Then, use a toothbrush’s bristles to make it have texture.

The final step is to bake them in the oven.

“My favorite part of the workshop was meeting new people and being creative,” Brianna Sanchez, a child development major, said.

The finished clay is then put in an oven to be baked for 15 minutes. But sometimes they have to be baked a little more so they can properly molded.

After that, the key chains are inserted on the top of the concha with a split being made from a knife.

“Professor Palencia encouraged me to take this workshop and I thought it would be fun,” Bronson Deavila, communications major, said.

Along with facilitating the workshop, Palencia is also the owner and creator of the website Onceuponacharm.com. Palencia explained that she created her website in 2017 because of anxiety and panic attacks she used to have.

She would make key chains, buttons and tiny objects made from clay. She said it helped her cope with the anxiety.

Now, her website is a business, which anyone can find online with many of her other creations for sale.

The workshop is a way for students to learn how to make fun art crafts and learn more about Hispanic culture.