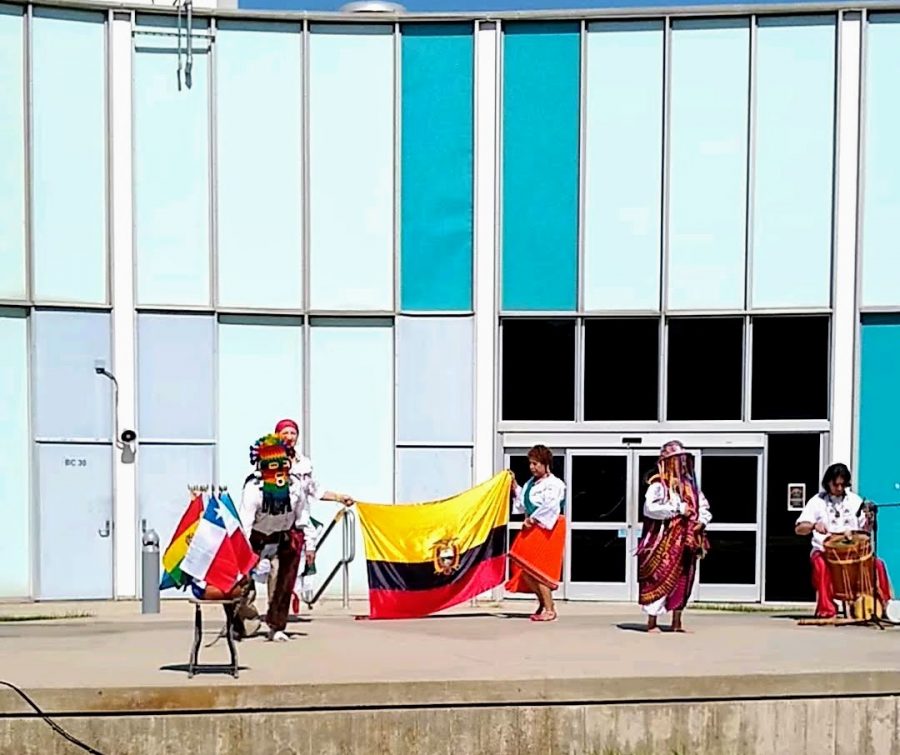 A speaker introduced Villegas and what she does as Villegas told a bit about herself. She explained that she was a student at Cerritos College, an ambassador of Ecuadorian music, which is her native country. She has also lived in the United States for over 45 years.

“I started dancing and singing Ecuadorian music over 10 years ago because nobody knows Ecuadorian music or they might not like it,” Villegas said, “I do this because I love it and hope it will be noticed more.”

She also said that when she first started she stopped singing and dancing for a long time until she began again after a while. It was something that she had to do, sharing it with everybody and she loved it.

Villegas sang most of the time on stage as her backup dancers made little movement, but they were subtle and it did not overpower Villegas’ singing. She also moved around the stage, but not much since her singing made up for that as she sang.

The dancers were three women and one man. They all wore Ecuadorian costumes, which had a little Native American inspiration with them. The women wore dresses in traditional colors, such as, white and green and the men wore a colorful mask that was a tradition to wear.

“I could relate to this because I am Mexican,” Brianna Rodriguez, an Anthropology major, said. “It’s a great way to learn about my culture.”

There were only three instruments that were being played as the guitar was played on a computer through speakers. The three instruments were an electric keyboard, Ecuadorian drums and bongos. They were played mostly after the performers went to change into other costumes.

The costumes were a lot more colorful than the others, Villegas was the one who changed the most. She had a purple skirt and a white shirt, complete with a headdress that had long purple ribbons and it covered most of her face.

The last dance they did had more dancing and no singing. The dance had a lot more movement as the performers brought out Ecuadorian props and the instruments played another traditional song. They even brought out the Ecuadorian flag.

At the end of the dance, the flag was wrapped around Villegas as she continued to dance for a few more moments.

This event was a way for students to see that dancing and singing can also be a way to learn about Hispanic Heritage Month.