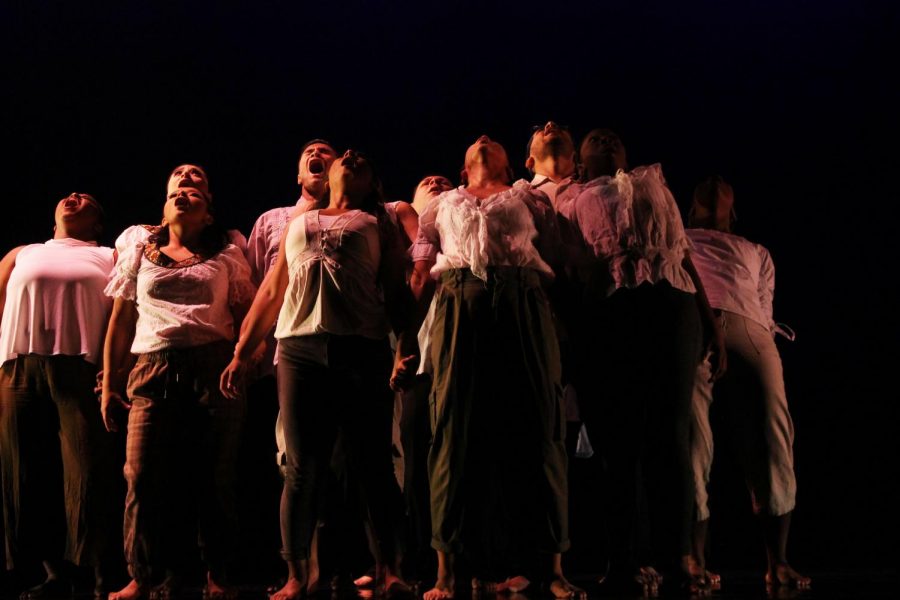 The Dance Department put on their semesterly dance concert and made sure they tapped into their emotions before heading on stage. The dance concert took place at the Burnight Center Theatre Oct. 31 to Nov. 1-2.

Students performed their semesterly dance concert in the Burnight Center Theatre, where plays, dance recitals and musical performances come to life on Oct. 31 to Nov. 2.

The dance was put together by the Cerritos College Dance Department and students performed a series of dance styles.

The students performed a total of four shows, all of which Rebekah Hathaway, chair of the Dance Department was exceptionally pleased with.

“This was a very strong concert for our department. All the pieces were choreographically strong and the level of technique in our dancers is continuing to rise and looked very strong throughout. I was very very proud of all our dancers and choreographers for turning out such a strong show, said Hathaway.

The Dance Department had been practicing for its dance show for about three months, once a week. They upped their practice times as performance dates approached said Jeremiah Martinez, dance major and performer.

Practicing their dance numbers in an empty theatre, with the exception of directors Christine Gregory and Hathaway, the dancers stare into the dark and dimly lit room and gracefully begin their musical number.

The dancers practiced the 16 pieces that were put together by the choreographers, having to rapidly change their dance styles for each performance, Ellis Adams, dance major, said.

“I’ve enjoyed my experience with all the choreographers. I’m in a tap piece and then also in a modern piece, so my brain is switching right on the dime to keep up,” Adams said.

The dance numbers hold a special place in the choreographers’ hearts, seeing as how some of the dances came from personal feelings and experiences.

The liturgical dance allowed the students to understand a different source of inspiration and be able to share that dance, Jones said.

Jermiah Martinez, dance major, was a bit skeptical upon doing modern dance, seeing how it would be her first time.

Martinez said, “I like hip-hop, I guess you could say it’s my preference, I really feel it. For modern it’s my first time, so in the beginning it was hard for me to connect with the choreography and what she (Alexis) really wanted.”

Although, Martinez had been a part of other dance concerts outside of Cerritos College, she was able to pull through and give the emotion and feeling the choreographer expected.

“I think now I can feel it, like what the choreographer wants us to portray,” she said.

As far as the auditioning process went, dance students auditioned and the amount of pieces a dancer could be in varied based on their availability and what the choreographers wanted, according to Adams.

Adams said, “I happen to audition for the regular concert pieces, but also the repertoire, which is hosted by one of the choreographers who is in direct correlation to a director.”

Another choreographer Dorcas Roman, created a modern dance, with a bit of contact improvisation, entitled “Us,” which was inspired by the music and it’s about “finding someone that will help you see the light within you when you get lost.”

She continues, “It’s not a romance, it’s not about a couple, it’s about two souls really helping each other find the light within themselves. I feel like sometimes, especially in society, we’re so busy, we forget to connect with ourselves, friends, family and community can really help us go back into that light.”

As far as production and wardrobe, everything came along smoothly.

Hathaway said “everything is coming along great, we’re in great shape, as far as costumes, well I will say we dancers are resourceful and used to performing on a shoestring and although we had a budget cut, really this concert looks fantastic because of my choreographers.”

“Most of my faculty choreographers have their own store of costumes that they pull from, but it’s not something I like to do. So a lot of our costumes and a lot of our budget cuts have been covered by that,” continued Hathaway.

The Dance Department had initially asked for $6,800 for the year, but received $4,000 according to the 2018-2019 budget proposed by the Associated Students of Cerritos College.

Concert attendance started off strong, but dwindled as the following performance days came.

“Although all our audiences were lively and attentive, attendance was down by about 45 patrons per show. We attribute this to our opening night falling on Halloween and the weekend after,” Hathaway explains.

The choreography was put together by faculty, students and guest artists from the Cerritos College Dance Department.