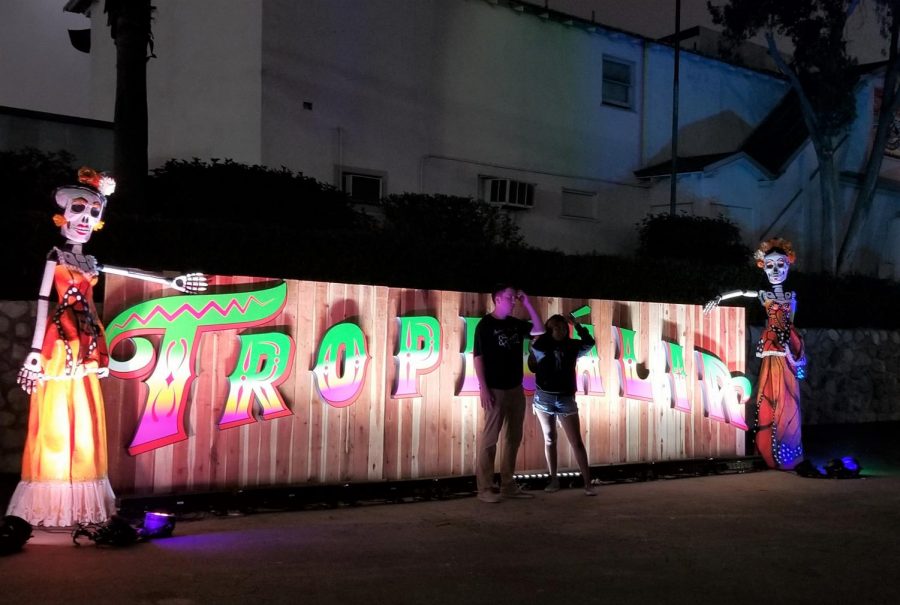 As the night comes to an end, attendees take their last picture by the Tropicalia sign. The sign consisted of Day of the Dead figures and bright lights.

From Kali Uchis to Chicano Batman and Cuco, the third annual Tropicalia Music and Taco Festival brought in amazing performers year after year, however the sudden change of venue and some sound system issues, Tropicalia needs some improvements.

After gaining popularity for the past two years, people were thrilled to buy their tickets and see their favorite artists ranging from norteno legends Los Tigeres del Norte to the psychedelic tunes by Cuco.

However, as the festival came closer, promoters of the festival announced the sudden change of location to the Fairplex in Pomona. The dates stayed the same.

There were mixed emotions when the news broke on Tropicalia’s social media, some people were excited that there would be more tickets, however others felt that the last minute change was very unprofessional and inconsiderate for those who had to fly in and book hotels for Tropicalia.

A bigger venue made sense in the first place considering that for the past two years, Tropicalia was held at the Queen Mary in Long Beach with a 15,000-person capacity.

Wouldn’t have made sense if they moved the festival to Fairplex at first instead of the Pico Rivera Sports Arena Grounds, a much smaller venue?

Nevertheless, the Fairplex venue gave enough elbow room for everyone that attended, according to the Daily Bulletin an estimated 30,000 attendees showed up for each day.

People could walk around from different stages with ease without feeling crowded, there were more food vendors (thanks to Goldenvoice partnering up with Los Angeles based food/culture website L.A Taco) and admire the colorful Day of the Dead-inspired sculptures by artist Ricardo Soltero.

With that many people, ranging from adults to kids, wouldn’t it be better if there was rides like a swing carousel or a ferris wheel?

Festivals like Tropicalia should make attendees feel like they are in a different world, make their weekend feel memorable.

That’s why festivals like Camp Flog Gnaw Carnival and Insomniac Events have gained popularity because other than offering music and food, there’s also other kinds of entertainment to keep people on their feet.

Without any rides, the festival becomes a bit dull. Attendees would have to wait around until their next artist performs.

Another thing Tropicalia Fest could improve on was their sound system.

Smaller bands like The Drums and The Marias got the short end of the stick when it came to the sound system.

Some of the sets would sound grainy, staticky and bands like The Drums would start to play without people knowing since their microphones weren’t on for the first few minutes.

Although they are all great performers, it felt like the sound system sounded better for the headliners rather than the smaller bands.

It’s important that everyone sounds great, attendees spent a lot of money to listen to their favorite bands and have a great time.

Tropicalia Festival has gained so much attention since its initial start in 2017, people were thrilled that there was finally a place where their Latin roots and alternative music come together for a fun weekend.

Tropicalia Fest deserved better, let’s hope next year will be a great one.