A classical duo perform at the Cerritos College Burnight Theatre 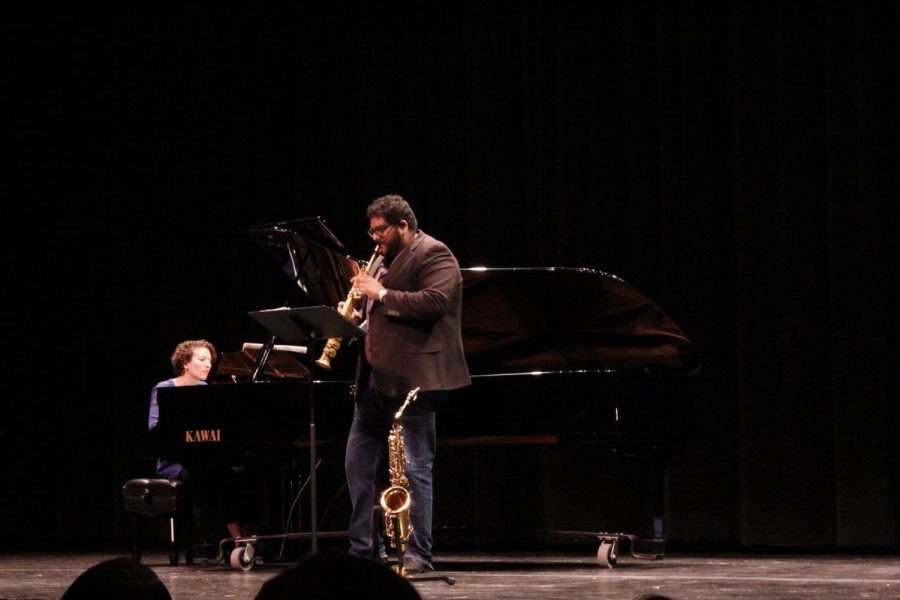 Harrison and Longendyke began their first piece with great sound of the piano and saxophone. They played the songs that were included in Albatross by Sally Beamish. They were actually all played in one go.

“I was actually a pre-med student until I started to play the saxophone again, but I grew to love it much later.” Harrison said.

The next two songs that were played were soft, yet intense as the saxophone pairs greatly with the piano in the background. The last two were the most intense as it sounded like a soundtrack for noir movies in the 1940s and 1950s. Everyone applauded as the Uproar Duo finished the songs in 5 sets.

Longendyke said that she has played piano since she was seven years old, although she wouldn’t give up her age, but that she loves performing in concert.

Harrison and Longendyke took turns introducing themselves and telling what each song meant after each set.

Harrison has performed in hundreds of concerts throughout the United States and Europe as a chamber musician and soloist. He has been acclaimed as “spectacular” with a sound that is “broad and rich.”

He has a doctorate in Musical Arts from USC and a master’s degree from the University of Texas at Austin Butler School of Music. He serves on the faculty of Mt. San Antonio College, Cerritos College and the French Conservatory of Music.

Longendyke has performed in solo and chambers across Europe and North America. She has won first place in piano competitions in Minnesota, Indiana, Illinois and Massachusetts. She made her first orchestral debut in 2012, performing Bartok’s 3rd Piano Concerto.

SInce 2012, she has performed in over 90 works and is the founder and Artistic Director of Music in Bloom, a music festival in Indiana. Currently, she is the Director of Chamber Music, and Artist in Residence at the University of Chicago Department of Music.Did you interview any of the students?

A program was given to the audience, explaining the different musical pieces that were going to be played. There was Albatross by Sally Beamish, Unfamiliar Territory by MIcheal Markowski, Amare by Stephanie Ann Boyd, City Vignettes by George N. Gianopoulos and Days Made of Now by Troy Armstrong.

The concert was performed by the Uproar Duo who played an exciting, yet calming experience for the students at Cerritos College.