“All My Sons”points fingers and demands answers 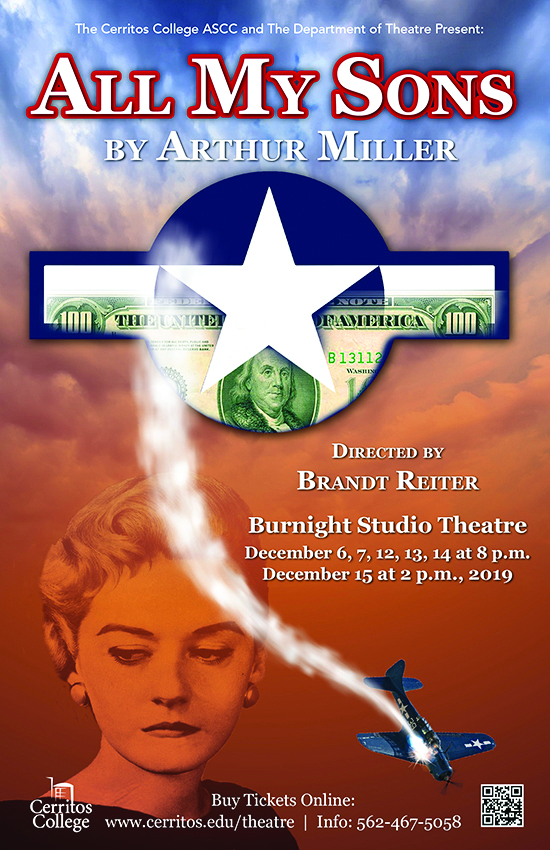 An Arthur Miller classic is performed the Burnight Center Theatre and directed by Brandt Reiter. The play will continue on until Dec. 15, 2019. Photo credit: Theatre/Film Department

The Cerritos College Theater department’s production of “All My Sons” is a wonderful success. This play, first performed in 1947, is relevant and farsighted in its exploration of the consequences of wealth accumulation and the hidden faces of domestic life. The Theater department has brought these themes out vividly with the powerful performances and engaging set.

Telling the story of the Keller family’s battles over money, grief, and justice, “All My Sons” is a story of the past impacting the present.

Joe Keller, played by Israel Mata, is the factory owning father with a hidden criminal past. His son’s decision to marry the daughter of his ex-partner currently in prison for the crime he was “exonerated of” slowly peels the mask of innocence he and his wife, Kate Keller, played by Angelica Montoya, wear.

The lead performances by Mata and Montoya push the show forward. Mata’s Joe strongly defends his choices, but can be seen for the weasel he is, with a sly, affable shell of an innocent father.

Montoya’s Kate is an especially strong character as she lays at the center of much of the conflicts in the play. Montoya plays both a grieving mother in denial and an accomplice to Joe’s shameful deceptions.

Kate’s denial of her second son’s death in World War II puts her at odds with her son, Chris Keller, played by David Hodson, as he hopes to propose to his dead brother’s girlfriend, Ann Deever, who is played by Sofia Moreno. Ann is also the daughter of Joe’s imprisoned business partner.

The entire three-act play took place in the Keller’s backyard. This setting not only allowed the cast and crew to focus on detail, rather than variety. The performances meld well with the simple backyard setting and all available space is used, and all props are put into play. The raised seating allowed for a full view of the action.

The main cast was joined by a supporting cast that has individual shining moments of both levity and powerful impact.

The play’s contemporary relevance can be seen in the portrayal of the confluence of industry and warfare as well as in the strength “business” plays in the shaping of the “American dream.” Joe Keller is controlled by his quest for wealth which he cloaks as providing for his family and leaving a legacy for his son. He vainly yells “When they work for nothing, I’ll work for nothing!… It’s dollars and cents, nickels and dimes, war and peace!”

Chris’ experiences in the war have disillusioned him from the sole goal of money and consumer happiness. The revelation of his father’s actions reveals Chris’ stunted idealism as he asks “Is that as far as your mind can see, the business?… Don’t you live in the world?” Hodson’s acting shines as his character’s hidden emotions bubble up and he admits: “Now I’m practical, and I spit on myself.”

The Cerritos Theater department’s production of “All My Sons” is led by the strong performances of the cast and the fantastic dialogue by Arthur Miller.