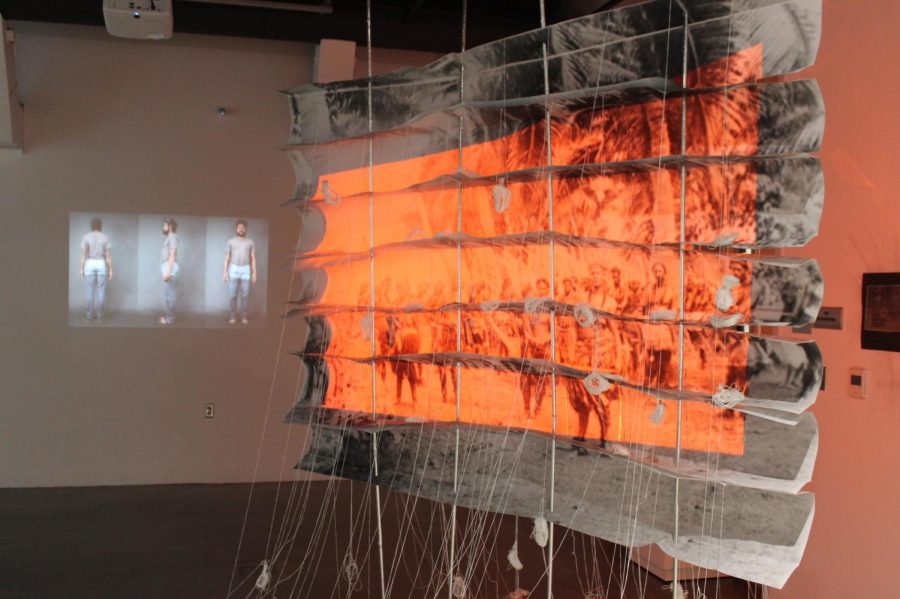 “Biomythography” is a focus on the perceived representations, both mythic and historical, that impact the identity of a culture.

The artist’s work expands on this concept by offering different perspectives and “making visible” both the minority groups themselves and the oppression they face.

Chuck Feesago is an artist as well as an instructor at the University of La Verne.

His latest installation centers on the lost history of Blackbirding, a practice that sprouted after the abolishment of slavery in the United States and continued throughout the 19th and 20th century.

It was a method of wide-scale oppression that targeted Pacific Islanders, coercing and kidnapping them to work on plantations.

The installment includes reprints of early photographs surrounding a larger system of photographic paper held together with rods strings.

Feesago draws awareness to their suffering by highlighting the devious campaign of propaganda that was used to deceive indigenous people into captive servitude.

He said that awareness of these horrific practices puts into perspective the contemporary identity of Pacific Islanders and how the destruction of their past affects their culture today.

“Deadnaming” is an installation and social performance by Vietnamese artist, Thinh Nguyen. The piece is a collection of traditional prayer candles encircling a black Buddha statue, each depicting a name along with the date and cause of death.

Nguyen invited visitors to participate in the performance by repeating the names of each victim three times. The purpose is to shed light on the prevalence of transphobia and the violence it still motivates.

Before concluding his performance, Nguyen asked for a moment of silence for those unnamed and said, “When we live in a society that constantly tries to erase you, who we are and what we are is a revolution.”

Nguyen studies the relationships between different cultures because they believe that commonality is a better foundation for unity. In “Deadnaming,” Nguyen uses faith and spirituality to mourn and remember the victims of 2019.

History shows that most religions are often at odds with the LGBT+ community. Even in contemporary society, religious beliefs can determine support or opposition to legislation threatening the civil rights of LGBT+ peoples.

On Jan. 24, Tennessee governor Bill Lee, signed a bill (HB836) allowing state and federal foster care agencies to discriminate against gay couples. This attributing to the belief that a “natural” marriage is between one man and one woman.

Nguyen hopes that by placing these two entities together, they can begin to bridge the divide.

“Religion allows us to feel comfortable and mourn for those we lost.”

Rather than using religion to create a greater wedge between these communities, Nguyen chooses to utilize its healing factor.

The exhibit is curated by Christ Christion and Jessica Wimbley and will remain in the art gallery through March 13.