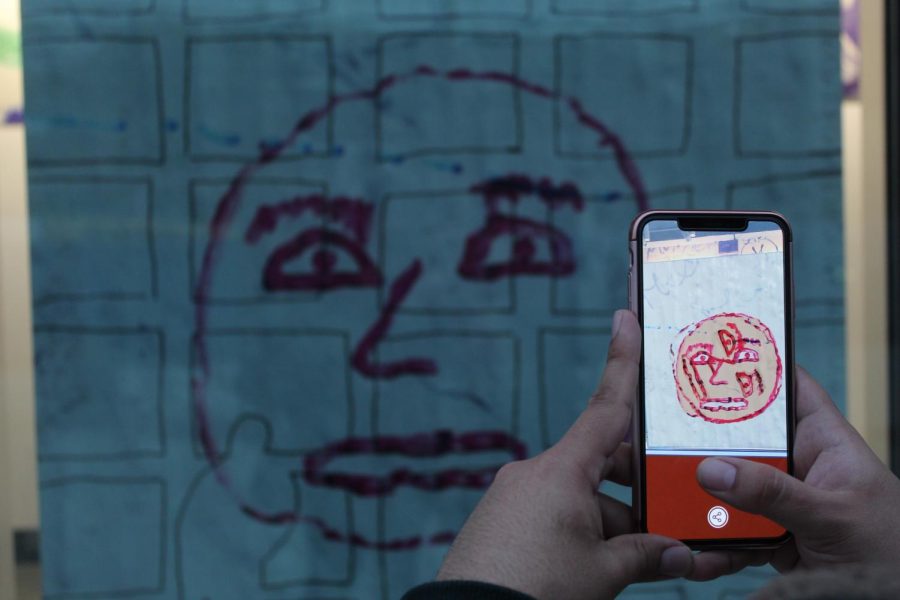 Jody Zellen LA based artist presents “THE HUMAN TOUCH,” an art exhibition that uses a free augmented reality application that bring the paintings to life, at the Cerritos College Window Dressing Installation from Feb. 24 through March 6.

The photographs depict graffiti covered walls from Zellens traveling around the world, including the United States, Asia and Europe.

“I was interested in this universal language of drawing and also wanted to think about the ways I would extend and layer these drawings started by others,” said Zellen, “The intent in ‘THE HUMAN TOUCH’ is to bring drawn lines to life.”

Zellen was intrigued to find a way to extend the photographs into animations, “I wanted to imagine how these lines and faces drawn by anonymous others, could move and become more than my static photograph,” she said.

She has included interactivity for many years, she started making net art projects in the ’90s, then transitioned to interactive installations in the ’00s and later iOS apps in the ’10s, “I like empowering viewers to be active participants in the viewing of my work,” Zellen said.

She often includes net art, iOS apps and interactive installations, as well as photographs, paintings and animations. For ‘The Human Touch’ uses a free application called Artivive (www.artivive.com) which is also easy to use, you just scan the QR code provided by the installation to download the free app and capture the image with your camera and the images begin to move.

“I wanted to use Augmented Reality in this project as I thought it was the perfect platform to combine my static and animated works,” Zellen said.

As for the audience and students that have seen the exhibition, “I hope they get excited about using technology in their artwork and inspired to make their own animations and then create AR artworks. I also hope they can begin to think about ways of presenting artworks non-traditional ways, outside of gallery spaces,” she said.

Zellen shared that originally it was a 40 page book project where each image triggered an animation, she then later printed the images at a larger size for display at a festival at the Los Angeles Convention Center in 2018.

James Mac Devitt, Director/Curator of the Cerritos College Art Gallery and Professor of Art History and Visual/Cultural studies,has known Zellen for a couple of years and is a fan of her work.

“The Human Touch was a whole different way to use the space, getting the people that normally walk by with their faces in their phones to interact with the space using that very device of distraction” said Devitt, “augmented reality, which overlays virtual information on top of live video, is an exciting new technology and this installation harnesses that in a really fun and playful way.”

Devitt shared that he hopes that students take the time to interact instead of just walking by unaware of their surroundings, “I also hope that art students come to realize how easy it is to create these kinds of augmented experiences,” he said.

All someone needs to know is how to use Photoshop to make images and Final Cut to make movies, which are both taught at Cerritos College, then they can easily create similar augmented experiences.