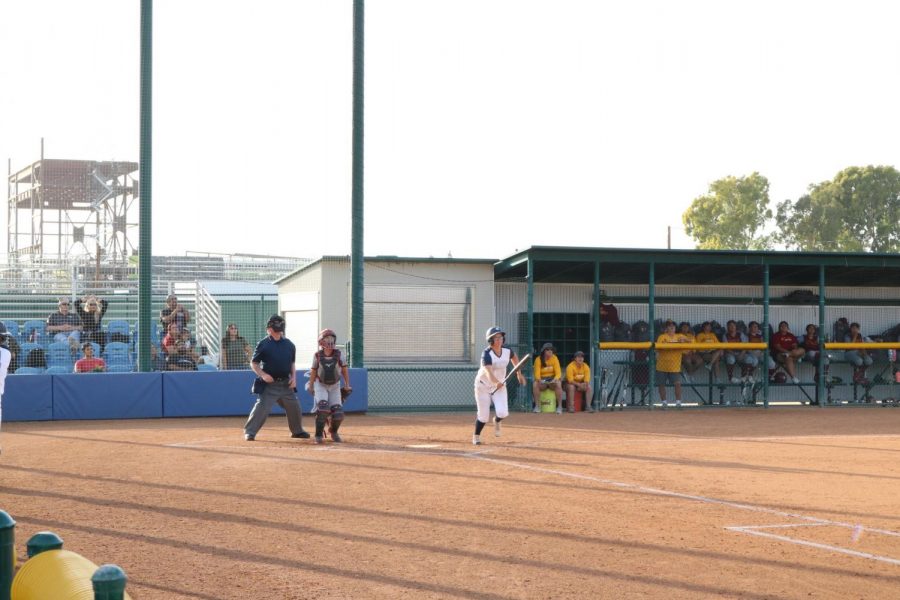 Brianna Spoolstra goes 4 for 4 with 2 RBIs on the day. Photo credit: Onei Chaul

The Falcons softball team got back into the winning column after defeating the Pasadena City College Lancers with a score of 9-3 at Nancy Kelly Field on March 5.

The team started the game off with 1-0 lead after freshman catcher, Dominique Jimenez, hit an RBI single to left center prompting sophomore first baseman, Brianna Spoolstra, to score at the bottom of the first inning.

It didn’t take long for the visiting Lancers to respond.

With two outs and two runners on base at the top of third, freshman first baseman Katelyn Wooton fired one to center field on a three-run home run, giving Pasadena City the lead 1-3.

The lead wouldn’t last long for the Lancers however, as this would be the last time they would draw any points on to the scoreboard.

After giving up the three runs, Falcons sophomore pitcher Skyler Swearingen struck out the following batter for the final out and the Falcons proceeded to even the score at the bottom of the inning.

Following the single to get her on first base, sophomore outfielder Haley Davis went on to steal second base with one out and Spoolstra was able to move Davis to third with a single.

Following that, sophomore third baseman Kayla Aros doubled Davis in for a run while Jimenez continued the momentum with a sacrifice fly that brought Spoolstra home to tie it all up.

Davis gave the Falcons the 4-3 lead with an RBI single in the fourth inning for their only point of the inning.

In the fifth inning with the bases loaded, freshman pitcher Chasity Martinez drove in a run with a single and freshman shortstop Ariana Gambala brought in another run with a sacrifice fly.

The Falcons would end their scoring frenzy with Spoolstra doing it again and driving in runners on third and second base with a single while pinch runner Annjelica Moreno-Englebrecht would score on a wild pitch.

The Falcons would end the day with a score of 9-3 and 15 total hits.

While the whole team did a great job, the standout on the offensive side was Spoolstra going 4 for 4 with two RBI’s.

Head Coach Kodee Murray went on to praise her team after the game.

“Some teams would have quit after giving up the three-run home run but we’ll always give it everything we got,” Murray said.

Murray praised her starting pitcher for the way she dealt with adversity early on and did not forget her relief pitcher Chasity Martinez.

“She responded great,” she said, “and our reliever did a great job closing out the game.”

Swearingen gave up 3 hits and 3 runs with 6 strikeouts in five innings while Chasity Martinez gave up just 2 hits in two innings pitched.

“We just got to get up tomorrow morning and do it all over again,” said Coach Murray when asked if she believes the momentum would carry on for a doubleheader at College of the Canyons on March 6.

Following the doubleheader, the Falcons will head to East Los Angeles College on March 10 to face the Huskies and return to Nancy Kelly Field on March 12 to take on Compton College.