Cerritos College Art Gallery presents: SOME FORM OR OTHER by Caroline Clerc 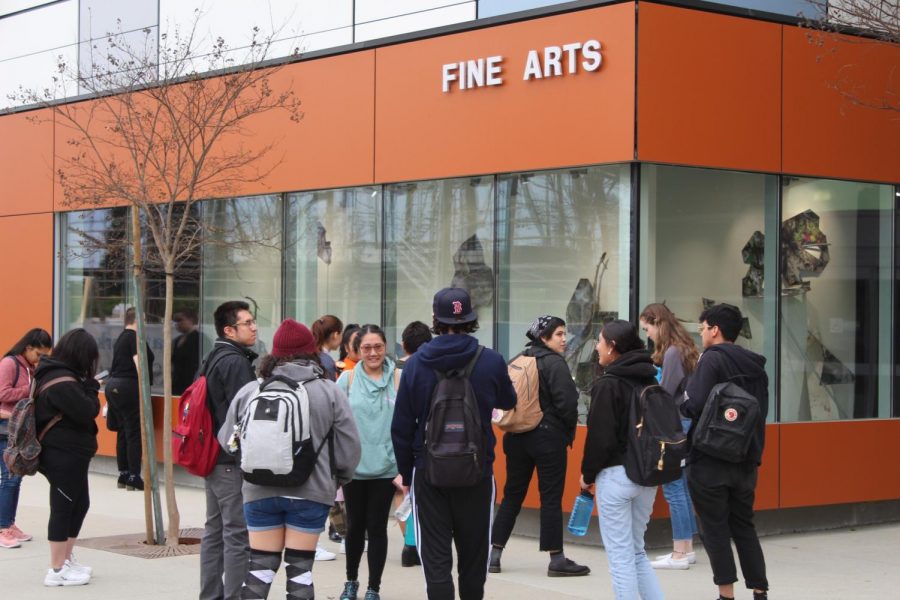 "Gather round!": Students attend the reception for SOME FORM OR OTHER. It is on display through Mar. 20. Photo credit: Daniel Suarez Jr.

The fine arts building unveiled SOME FORM OR OTHER, a new sculpture in the gallery window. The featured artist is professional photographer and USC instructor, Caroline Clerc. She attended the gallery’s 5 p.m. reception on March 9 to speak to a class of students about her work.

According to Clerc, her sculpture is composed of objects she picks up while taking her daily walk, including materials like rocks, sticks and styrofoam. The objects are stacked precariously without the use of wires or screws.

The installation combines trash with discarded test prints that Clerc paints and draws over with what she calls an “80’s color pallet.” The test prints resemble glossy black sheets of paper with bright streaks of color.

Her work makes a statement on climate change and western consumerism over decades. She described how partisan politics have split the original consensus about climate change along party lines.

“In the 1980’s we started to see more partisan politics and the conservative backlash against the notions of climate change had risen,” says Clerc, “It was also a decade of a lot of consumption. So I think (my work) harkins back to a decade where we understood what to do about this issue.”

Clerc uses the juxtaposition of old with new, using raw natural materials like branches, to hold up cardboard and paper products. There’s also the vibrant pink and yellow colors of the trashed images that ironically allude to bright packaging on a new product.

The physical design of the structures was finalized by Clerc after she selected her materials.

Clerc said, “Since I am gathering trash from the streets, I don’t know what I’m going to get, so my work evolves in the process of doing it. You have to respond to the trash that you see.”

The installation resonated with Joanna Et, a nursing major. She said, “I feel anxiety about my trash all the time. I like the way she reuses waste and plastic as if to say it still holds value.”

Clerc is based in Downtown Los Angeles where she teaches and works in her home studio. She has been creating and sharing her art in galleries for more than 20 years.

She also has an online portfolio containing a select few bodies of work as a photographer. Her 2018 project, “From things that came before” explores the products that adorn our home, while recognizing the deforestation and habitat loss that occurs as a result.

The window dressing is scheduled to remain in the gallery through March 20. The reception provided complimentary pizza, snacks and beverages for attendees.