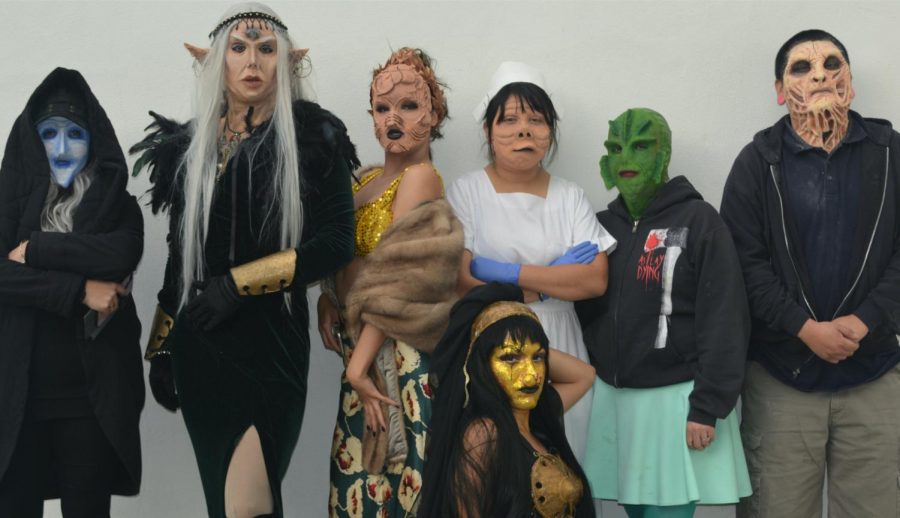 Students from the college's costume and makeup program transform themselves into elaborate, imaginary creatures using special effects makeup. Professor Susan Watanabe, who teaches the program, shares this photo from a previous class taught on campus.

Like most Cerritos College courses this semester, the Costume and Makeup programs have also gone virtual and Professor Susan Watanabe shares how she and her students have adapted to the online makeup classes.

Watanabe is currently teaching two online makeup classes this semester; one a college class and the other a dual enrollment class with students from a local high school.

Watanabe prerecords her demonstrations for her makeup lessons on YouTube, then posts the video on Canvas for students to watch prior to their live practice lab held on Zoom.

One challenge she has encountered with going virtual is the limitations she’s had in assisting students who are having trouble with a makeup look.

“[In class] I would actually paint it on one half of their face so that they can copy it on the other half. And that seems to work better for them rather than looking at a picture or their notes from the demonstration, so I’m not able to do that now,” she said.

Difference in the students’ video quality, lighting conditions, and learning setups have also posed a challenge by making it hard to check their makeup looks accurately during their practice labs.

Students have also faced some limitations when selecting models for their makeup looks.

“[Students] are picking little brothers and sisters who, if you’re trying to make them look 70 years old it’s more difficult,” Watanabe says, “and some of them, they want to have a model but then nobody in their family would do it for them.”

Students who have taken her classes on campus before have expressed they prefer the face-to-face lessons over the online ones.

Each year, Watanabe also coordinates a trip to Knott’s Scary Farm for her makeup students, giving them an opportunity to go backstage and interact with the special effects artists and observe them as they transform their models into scary monsters.

Unfortunately, this year’s trip has been canceled due to the park’s closure amid the pandemic.

Watanabe has a special relationship with the park. As a student, her makeup teacher would bring her along to help with the cast members’ makeup, and she also worked as a makeup artist at the park for ten years.

“When I was makeup artist there, I would always take my students in, and even when I started taking the whole class I said, ‘everybody is going to do something on my monsters,’” she said.

“And you know they’re nervous at first, but they get so excited when they see their monsters.”

The theme park has grown more restrictive over the years, and this past year the park stated they did not want any college students doing any cast members’ makeup, Watanabe said.

Watanabe is currently only teaching the beginning makeup classes this semester and will teach an additional two beginner classes in Spring 2021.

The advanced makeup class, which is taught every two years, was originally scheduled for this semester, however, it is postponed until Fall 2021 due to the campus closure.