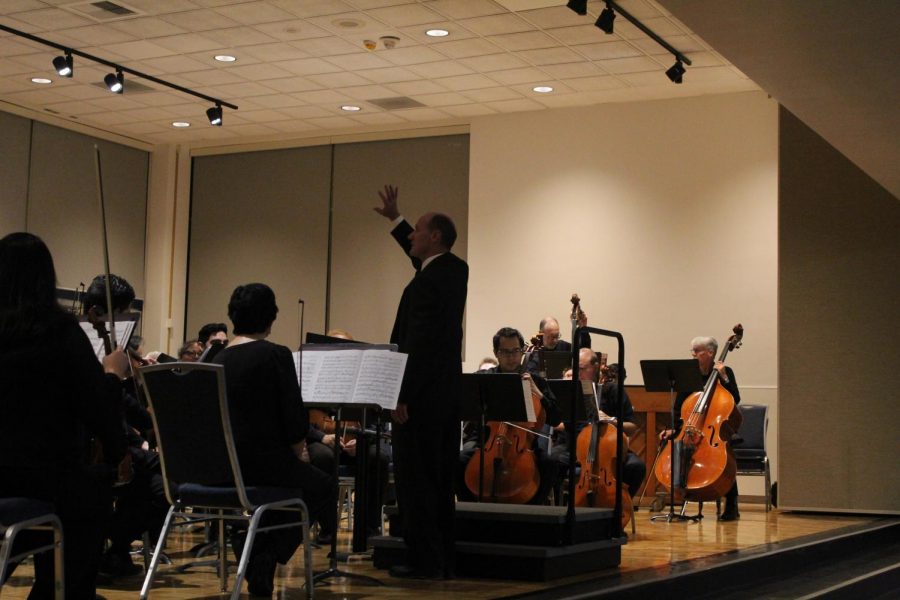 Dr. David Betancourt, Cerritos College band director, is the organizer for the Spring concerts. It is important for him to create a learning environment for musicians and to get younger students involved.

“Music should be for everybody so this is a way for us to reach out to the community and also help our colleagues who are teaching the younger grades so the students can see that they can keep going, they don’t have to stop playing music after middle school or high school,” Betancourt said.

“They did a fantastic job. Of course there is always things we need to work on, but they were quite nervous as it was their first outing on a college campus, and for a 13-year-old it is a tall task and I think they meet the expectations that I was setting for them,” he said.

It has been one of the biggest venues Tiger Band has performed at. Castro mentioned how the students felt intimidated at first, but after having the opportunity to interact with Betancourt and older music students, Castro noticed the amount of growth that the experience had on his students.

“They started behaving like college students and they were like ‘Hey Mr. Castro when are we going to go back to Cerritos?’,” Castro said.

Castro mentioned how it was important for him to bring his students to participate.

“In our neighborhood we are low income, we are title one school, so college is not really spoken about and the fact that we get to come on a campus that reflects the demographics of them, it makes them feel welcomed,” he said.

Castro also wanted this experience to expand their passion for music.

“They are so new to the world of music, they are not really sure of what it is yet, but when they get to see older people they’re like ‘Okay I can do this, I can copy what they are doing’,” he said.

Castro is a former Cerritos College student and mentioned he played under the lead of Betancourt ten years ago, so it was a great experience for him to come back to the campus with his own music students.

Cerritos College Orchestra took the stage next along with Director Mr. Alan Hallback. They opened with “Idomeneo, Overture” by W.A. Mozart/arr. Aubrey Winter then they moved on to a Beethoven classic, “Symphony No. 7, IV. Allegro con Brio.”

The orchestra ended with an upbeat melody, “Everything’s Coming Up Roses” by Jule Styne/Stephen Sondheim/arr. Bob Cerulli, which director Hallback dedicated to his family who came from out of state to attend the concert.

Hallback explained how they usually choose songs based on the orchestra and band’s musical strengths.

“We want to create some variety so that it makes it more entertaining for the audience, so they heard everything from Mozart to some really contemporary female composers,” he said

“I’m hoping that the students continue to enjoy performing, the orchestra has gotten bigger over the last couple of years so it gives us more room to do different kinds of literature,” says Hallback, “so we are going to move a little bit away from classical and do more contemporary pieces, what we are hoping it to give everybody a well-rounded view of the music that they can play.”

They ended with “And The Grass Sings In The Meadow,” an original composition of Travis J. Cross, a professor at UCLA.

“We are going to be doing a concert with him on March. 22 at Concordia University, and he’s going to come and work with the students,” Santos said.

Santos mentioned the students have been preparing the song pieces since January and they had their second performance from their festival tour at the Cerritos College Spring Concert.

The Wind Ensemble has performed at other big venues like UCI, CSULB, CSUF and USC.

“We try to perform as much as possible in front of different crowds and they really enjoy it, we are very fortunate to have these opportunities and we are thankful to Dr. Betancourt for allowing us to come and perform at Cerritos College,” Santos said.

He expressed how proud he was of his students and even though it was a new atmosphere they did a fantastic job.

“I think the best thing is for them to see that music is everywhere I think a lot of times they get stuck in their own high school, city and environment,” says Santos, “getting them out to Cerritos College and getting to hear a middle school and hearing the orchestra is an opportunity for them to know music exists everywhere and they can be a part of it after high school.”

Cerritos College Concert Band ended the concert with “Furioso” by Gary Gilory and as a way to show and encourage women can also be a part of the industry they incorporated two songs composed by women, “One Life Beautiful” by Julie Girioux and “Roma” by Valerie Coleman.

Betancourt expressed how the songs they prepare are very difficult so students prepare in class and on their own.

“One of the cool things is that we had two other schools, I think it’s very important to reach to the community and give them an opportunity to play and give us an opportunity to hear them, they can hear us, there is a lot of win-wins,” Betancourt said.

Cerritos College Concert Band has had other performances at other campuses including four-year schools and are preparing for the Lawrence R. Sutherland Wind Festival in Fresno.

Betancourt expressed that beside learning about music, he likes to see his students learn about other aspects they can apply to make them more enrich in life.

“What I really like to see them get along the way is the journey itself, not just about music but about life, working together, collaboration, respecting each other, and seeing what they can accomplish when they work together and all these things that will benefit them outside of the band, things that they can apply to everything they do in life,” he said.