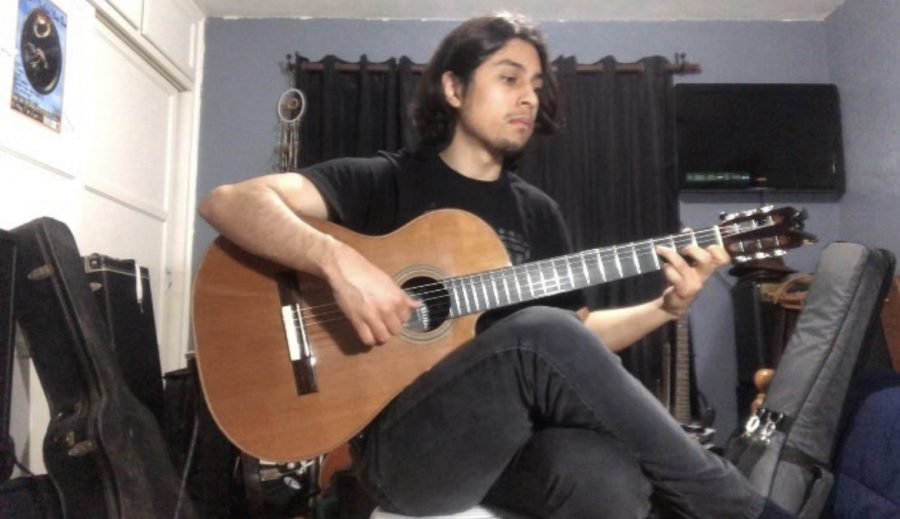 George Loulakis, music major, has had to adapt to online learning. He has the necessary equipment at home to practice. Photo credit: Courtesty of George M. Loulakis

“Because of COVID-19 all of my classes that are performance-based were all cancelled so music majors aren’t able to do what they love and what they are going to school for anymore”, Mya Sanchez, a music major, stated.

She expressed that having music classes transferred to Zoom has been difficult since music classes aren’t classes that are able to be taught remotely.

She said she was fortunate to have her own piano at home, but “not having a teacher’s assistance to support you through learning different music pieces has made quality of learning decrease greatly.”

Sanchez mentioned that music students have been doing written assignments just so they can have a grade by the end of the semester.

“I am asked to do written discussion assignments, essays, and playing assignments, so I need to record a piece I learned and turn it in,” she said.

Traditionally in music-performing ensembles, they get together and everything happens in real time.

They create music, have immediate feedback and they collaborate in real time, as explained by David Betancourt, the director of bands and orchestra.

Due to COVID-19, all of that has changed for Cerritos College music students and professors.

“Even with all the great technology that there is right now, there’s not the technology to put music together in real time,” Betancourt said.

Betancourt explained that outside of their in-class rehearsals, students usually prepare outside of class so he had to flip everything and fundamentally he has focused on what they’re meant to be doing in preparation for the class instead of what they actually do in the class.

Betancourt expressed that he is aware students are going through a lot and every student is taking other classes and would find it unfair to the students if they were to change everything on the curriculum.

“I think we have to be realistic and contextual and what we offer,” he said.

He shared that he is offering his students different kinds of projects and assignments that really help them focus on what they can do at home on their own.

He is also giving out assignments that allows the students to collaborate to keep engaging with one-another.

Betancourt explained that his classes usually just meet once a week so he is currently assigning one assignment per week and for bigger assignments, he is giving students two weeks to complete them.

According to him, he also communicates with them and students have discussion forums so they can talk to each other.

“Just like in real life. I don’t want them to think that I have all the answers. I have a lot of resources but I want them to use each other as well because there’s lots of information that they can share with each other about music,” Betancourt said.

One of the benefits of online learning, according to Betancourt, is that students complete their work asynchronously.

Betancourt shared that he has taught online before for several years.

“I think it’s really important on online learning, just like in face-to-face that you establish those channels of easy communication, a space where they can trust the communication and the consistency of it.”

The biggest challenge students have been sharing is “discipline and self-motivation to keep a routine and to keep moving forward,” Betancourt said.

To help his students, Betancourt explained he had them establish a Monday through Friday schedule of when they want to get up, go to bed, things they want to get done in the day and how much time will they spend on them.

Musically, they have also established a practice schedule.

“Since we can’t all play together at the same time, we’re sharing with each other by doing little mini recitals,” Betancourt said.

Betancourt emphasized the mini recitals are not a requirement.

“I didn’t say everybody has to do this. I’m like, if you need that extra motivation, if you want that direction, here’s a way to do it, we’ll be your audience, you can play for us,” he said.

He explained that he does not give live lectures.

“If there’s a lecture that I need to give or share, I just record myself and I give it to them because the other benefit that I found is that they can come at any time they want,” Betancourt said.

“Some of them are really using that to their benefit, they’re coming at midnight and that’s when they like to do it. I can see consistently when they log in.”

Betancourt mentioned that a positive thing from the situation is that they have been getting to know each other more because now they get to talk about other things besides what is in class. They have also been getting more sleep.

The music department currently will keep all of their concerts cancelled, including the students showcase in which the best applied students perform and scholarships are given out.

“We’re still planning to give the scholarship to the students, just that there’s not going to be a showcase or any great way to get them all in the room together,” Betancourt said.

“We’ll find some other way to acknowledge them to give scholarships for the spring term. That’s when we do it just in the spring and give it to them before the spring term is completed.”

George Loulakis, music major, expressed he was lucky to complete his performing assignments before everything was moved online.

“We also have to show them technique we have been working on and studies from our instructors, now those are going to be just posted online.”

Another change Loulakis brought up is that people that didn’t do a recital won’t have a recital; they will just have a jury, so they have to submit a video of them performing.

Loulakis has all of the necessary equipment to complete the online music classes, stating, “I have a bunch of music junk in my room.”

He mentioned that now there is a lot of writing for his music classes.

“Writing up little essays and reports, a lot of my friends in the program complain about writing 400 words,” he said.

“I am an accompanist for a lot of other people for the recitals that were supposed to happen so we had plans to meet throughout spring break and now all those plans and recitals are cancelled, so I have all the sheet music but no performance,” Loulakis said.

“There is not much we can do than just be at home and practice, even if we try to do some form of online collaboration it wouldn’t really work well because there is a lot of latency and lagging and it’ll mess the timing for rhythm session for everybody,” he explained.

“It is a social thing, that is the only way it works, you can practice on your own but then you have to practice with others too.”

Frank Seymour, music major, mentioned that since the performances are cancelled, students now have to perform on video and send it in.

“Before, we would have to play and if we messed up it was understandable due to the nerves, but now it has to be perfect, so that is one challenge, the perfection,” he said.

Seymour expressed lessons have become challenging for him.

“I am a piano player so I am used to seeing the teacher next to me and I can hear him clearly, but now when I hear him play the quality is very bad since it is over the internet so I can’t really hear the dynamics,” he said.

“I am also in another class where I play duet in a piano, and for that class we can’t get together and play so we have to somehow play online,” Seymour said.

“I’ll send a recording of me playing the piano with a metronome and it is pretty impossible to do that.”

“The good thing about being home is that I have all my stuff here so I don’t really need to be at school, I have a piano here I have my computer with all the programs so I get to relax and save gas,” he said.