A musical city of Jones, Part One: Calvin Cujo 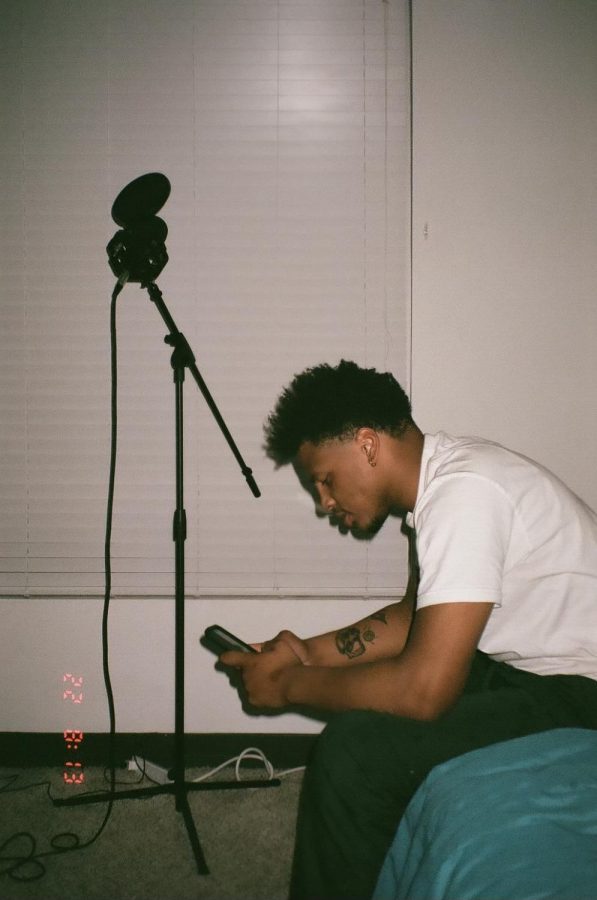 Cerritos artist, Calvin Jones, rehearses lyrics before getting ready to record a song. Jones plans to take 2021 by storm as he prepares to release new albums for his fans and the city. Photo credit: 10kfilmgallery

For 21-year-old music artist Calvin Jones, also known by his stage name “Calvin Cujo,” 2020 was a year of quiet success behind the scenes in the studio.

Jones took quarantine as an opportunity to perfect his craft and network with other local artists. With so much time on his hands, he put it to good use, using the time to make songs or listen to them.

“Throughout the whole period of COVID-19, I’ve just been working on music, being in the studio, working on albums, and most importantly, improving as an artist.”

Being stuck at home works out pretty well as it gives more time for Cujo to stay safe and work on music and keep a good rhythm, at a quick pace.

Spending time in the studio helped Jones not only learn about himself but also gain interest in producing and learning more behind-the-scenes studio work.

“I want to do everything right in the studio so I’ve used all this time during quarantine to improve on my work,” Jones said.

Growing up in Compton and Cerritos, Jones mentions how much the city has shaped and impacted his music, explaining that those cities help inspire him to make the music that he makes and listens to today.

“Cerritos has had a great impact on who I am as an artist. My whole life up until high school, I was going to school in Compton and the Crenshaw area, and I was only used to being around a certain type of people.”

He continues on saying, “When I started going to Gahr High School, I got exposed to a bunch of different cultures, ethnicities and personalities of people.”

What was at first a massive culture shock later on helped the local artist become more open-minded and to stretch his musical boundaries.

A music icon that inspired and influenced Jones to be an artist growing up and still to this day is Kanye West, sharing how much his music was influenced him and made him a big fan of the genres that he sings.

“I’ve always been a huge Kanye West fan. He’s my favorite rapper; he was the artist who introduced me to hip-hop and got my ears listening word for word when I was 13,” Jones said.

Along with West, Jones also mentions rap group Odd Future as another inspirational factor to the unorthodox way he raps and the style of music he produces.

“Listening to their music showed me that you don’t have to be a certain way to do rap music, which at the time I thought you did. It showed me that I can be myself while not having to sugar coat anything or be someone I’m not.”

As a young artist trying to separate himself from other rappers, Jones goes into detail and explains the background of his music.

“My music tells people about my life. I try to teach and explain lessons to my fans along with giving them an escape if they need it with some songs.

A future goal that’s always on Jones’s agenda is giving back to the community he grew up in. He wants to take his music so that many people could listen and get inspired by it for years to come.

“When I’m in the position where I’m able to do that,” Jones said, “Giving back is always something I plan on doing. I want to make the world a better place for everyone. I just want to do my part.”

In the next 5-10 years, Jones emphasized being in a position of financial freedom.

“I just want to be in a place where any financial woes or debt is not an issue for me,” Jones said.

For the Cerritos artist, 2021 will be a breakout year as he plans to drop three albums, containing 50 songs in total.

“I plan on putting a lot of music out just because I haven’t dropped in so long due to COVID-19,” Jones said.

As an up-and-coming artist, Jones wants to be remembered as someone who motivated people to just be themselves and to love who they are as a person.

More artists like Jones are well known in Cerritos and the surrounding cities and this is just one of the great ones to put his hometown on the map.