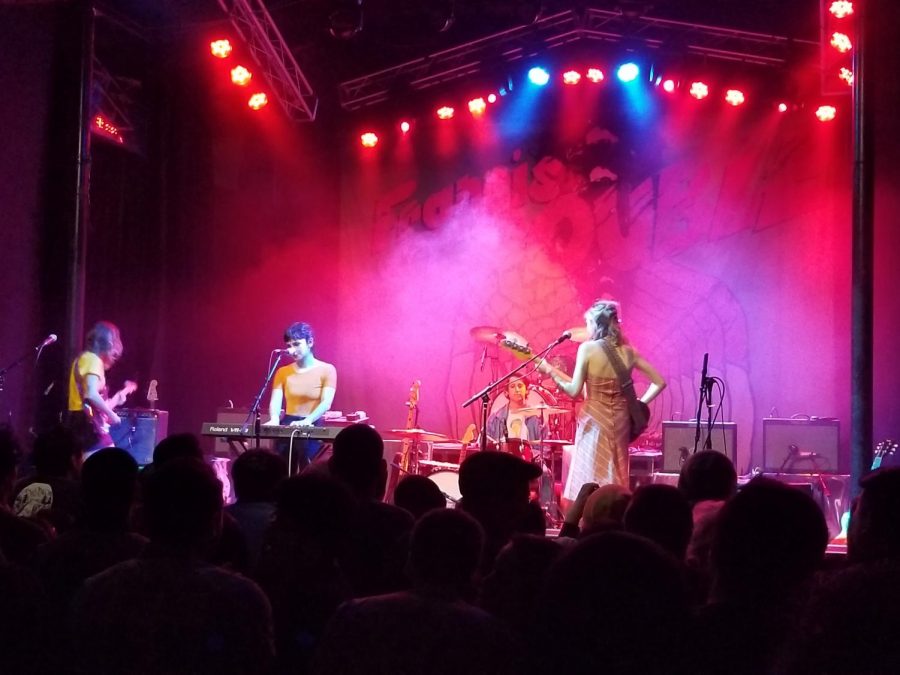 The Paranoyds opening up for Albert Hammond Jr at the Observatory. The concert was held on March 8.

Albert Hammond Jr., lead guitarist of the Strokes, played an unforgettable show at The Observatory in Santa Ana on the eve of his newly released album, “Francis Trouble” on March 8.Playing at the Observatory, a small and intimate venue for the third time, Hammond Jr. played with more soul and enthusiasm than usual, making this one of his most exciting performances yet.With the Paranoyds being the opening band for Hammond Jr., the rookies did not disappoint. Having a punk-rock sound and the songs not being half bad, made for a good opening band. And with three-fourths of the band members being women, it made them all that more intriguing. Even though the opening band were pretty good, everyone was excited for the man to make his way on stage. Hammond Jr.’s performances are always exciting and enthusiastic, but this last one blew it out of the water. Interacting with fans much more than usual, we could all see he was ready to give us his all. On stage, Hammond Jr. was comfortable and had lots of energy. Hammond Jr. was accompanied by his two lead guitarist, bass player and drummer. Hammond Jr. also played with his all time favorite Fender stratocaster guitar, making it the fourth guitar on-stage. Moving from each side of the stage and holding his mic like a wine glass, he sang the night away, showing off his vocal skills. Playing songs like “In Transit” from older albums, to new material from Hammond’s latest album, “Francis Trouble”, Hammond Jr., reminded everyone why they were there. Proving we weren’t all there because of his ties to the legendary Strokes. At some points Hammond Jr.’s dance styles were reminiscing of Mick Jagger, but it suited him. We haven’t seen Hammond Jr. be this ecstatic and playful on-stage. His fun gestures made his performance all that more enjoyable. As fashionable as ever, fans loved his outfit and demanded to know where they can too get the gold bomber jacket Hammond Jr. was wearing. Hammond Jr. being pleased with fans loving his jacket, he placed it on the microphone stand and showed off his jacket that no one could have. Keeping it fun and weird, Hammond Jr. gave his fans a great show they’ll always remember. Just when you thought the night couldn’t get more magical, fans got the opportunity to meet Hammond Jr. in the flesh sometime after the show. Hammond Jr. being the raddest guy out there, gave the fans a little bit of his time and signed vinyls and posed for photos.

Overall, it was a brilliant and praiseworthy show. Hammond Jr. made it so every moment was unforgettable and he is truly a talented artist.Seeing any of the Strokes band members on-stage alone always brings up nostalgia of seeing them together and killing it on stage, but Hammond Jr. has earned his spot in the limelight alone.Releasing four solo albums, and each of them only getting better with each release, Hammond Jr. truly is a talented soul.”Francis Trouble” released March 9.