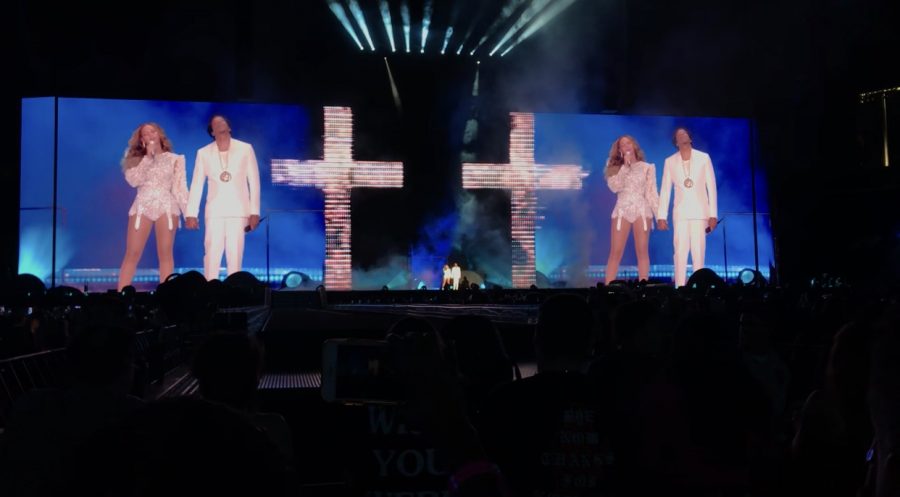 “On the Run Il” proved that Beyoncé and Jay-Z are deeper in love than ever before. The concert was an ode of love and heartbreak, with visual interludes showing the ups and downs of their relationship.

The Carters played at the Pasadena Rose Bowl on Sunday with the attendance of over 60,000 fans. Their stage was big enough that no matter what seat fans had, they were given a great view. With three tall and large screens, it was impossible to not see them.

One thing that could have been improved was the hiring of security. Most of the security staff team were young and scared of confrontation when it came to people cutting lines and sitting in others seats.

Thankfully, there were more experienced supervisors that handled the situation.

The stage layout was a step-up from the first “On the Run” tour which was on a single stage. This time around the Carters stepped it up by adding two runways to each walk-on and a show-stopping rising stage.

With most opening acts fans do not expect the performer to have a big name, but when attending a concert thrown by the Carters, big names are expected.

The show officially started at 9 p.m. with an opening video montage of the Carters and their relationship being portrayed as “the gangster and his wife on the run.”

They started off by performing “Holy Grail,” from Jay-Z’s 12th studio album.

Minutes into the two and a half hour show the couple showed major chemistry by hugging and dancing on each other making the crowd go crazy.

Performing their debut hits like “03′ Bonnie & Clyde,” “Crazy in Love,” and “Drunk in Love,” gave audience the chemistry they wanted.

Each artist had their own individual time to shine by performing their hit songs. Beyonce brought dance break after dance break; songs like “Diva,” and “Crazy in Love,” were one of the best dance performances going on as the audiences chants and screams.

Jay-Z made sure to prove he can also entertain by keeping the audience up on their feet and incorporating the audience with his performances. He performed fan favorites like “Big Pimpin,” “On to the Next One” and “99 Problems.”

The Carters made it aware to their fans to have a good time and love one another, they did not allow negative energy. Jay-Z made an announcement that “we need to love one another and respect each other; it’s all love.”

Toward the end of the show the Carters performed new songs from their collaborative album, “Everything is Love.” They added visuals from the album on the big screen while they danced freely.

They closed the concert with their new single “Apeshit,” fans went crazy and jumped along with the Carters. After the performance they thanked their team and fans for making L.A. the most loving city.

Many celebrities attended the concert and were all seated in a special VIP area. Oprah, Shay Mitchell, Mariah Carey, the Kardashian family, and many more danced the night away.