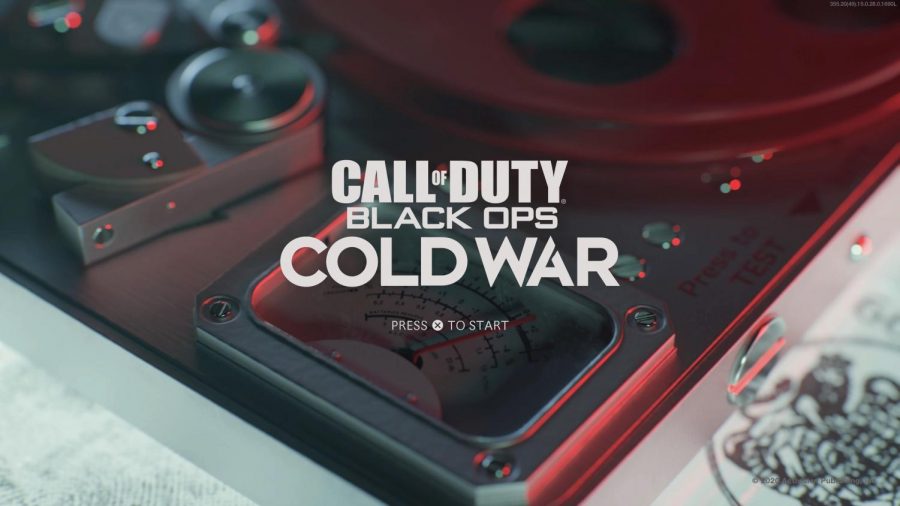 This is the Black Ops Cold War launch screen. This is the very first thing players see when booting up the game. Photo credit: Image from Activision/Treyarch

With “Call of Duty: Black Ops Cold War” being the seventeenth installment in the “Call of Duty” series, developers Treyarch and Raven Software had the challenge of innovating with this title.

It’s safe to say they succeeded (for the most part).

While 2019’s “Modern Warfare” brought refinements to the formula, Cold War opts to take a different approach. This year’s installment plays more like a classic “Call of Duty” while retaining the more realistic approach to movement introduced in “Modern Warfare”.

The graphic fidelity of the game is put on full display on the PlayStation 5, which is where I experienced the game. Ray Tracing is fully supported, and players can opt-in for a 120 FPS mode, which makes the game run beautifully.

As mentioned in our PlayStation 5 first impressions, the game utilizes the DualSense’s Haptic Feedback and Adaptive Triggers, which gives every gun a sense of tension that helps immerse players even further.

Speaking of immersion, the game’s gunplay feels as smooth and impactful as always. Each gun handles like you’d expect, and in some ways feels like an improvement over the weapons that were present in 2019’s “Modern Warfare.”

Sound was vastly improved in this year’s installment as well, with 3D audio being a huge boon to those with headsets that support it.

Warzone will be integrated into Cold War in the future, with developer Treyarch stating that progression between 2019’s “Modern Warfare” and “Cold War” will be universal starting with Cold War’s season 1 launch in January.

The game’s campaign is set in the Cold War and player-created character Bell, who works to track down Perseus, a Soviet spy who threatens the United States. The game is a direct sequel to 2010’s “Black Ops” and features fan-favorite characters from that game like Alex Mason, Frank Woods, and Jason Hudson.

Much like 2012’s “Black Ops II,” choices made in the campaign can result in multiple endings, encouraging replayability. Dialogue choices can also be made during the campaign, resulting in different outcomes. Missions often have side objectives that players can complete, resulting in situations where a player can approach a situation stealthily, or go in guns blazing.

The story seems to tread the line of being tongue-in-cheek or serious, with some missions having the player in Vietnam using a chopper gunner to defeat hostiles while Adler, a character in the campaign, is using expletive words in what is possibly the most American mission I’ve ever played. Other missions revolve around darker themes, which is where I believe the campaign truly shines.

Multiplayer is what most players would expect, with the usual modes like Team Deathmatch, Domination, and Free For All returning. The new fireteam mode is where the game gets new and exciting, delivering a 40-player mode where players are divided into 10 teams of 4 in a large map where they are expected to complete objectives.

New modes and maps are expected to be added in a seasonal format, with a battle pass being introduced each season.

Zombies returns this year as well, with several changes to the formula. While not as complicated as “Black Ops III” zombies mode, the model still has plenty of new introductions like armor plates, triple Pack-a-Punch, and craftable lethal and tactical weapons.

The biggest change to the mode is the introduction of rarity levels to weapons, which determines how much damage any given weapon can output. Previously, the game only ended if players chose to do the Easter egg on the map, or if they died.

Now, players have the option to “exfiltrate”, which allows them to escape on a helicopter with bonus XP. If they fail to get to the helicopter and eliminate the zombies present, however, the game simply ends.

Players also play as operators in this mode now and can choose a loadout weapon to enter the mode with. With all these new introductions to the mode, Zombies hunting is as fun as ever.

At launch, the game provides players with plenty of content, and will only grow as time goes on.

“Call of Duty: Black Ops Cold War” is a game with tremendous replay value and is a worthwhile addition to your collection.