Omori is a beautiful, terrifying RPG 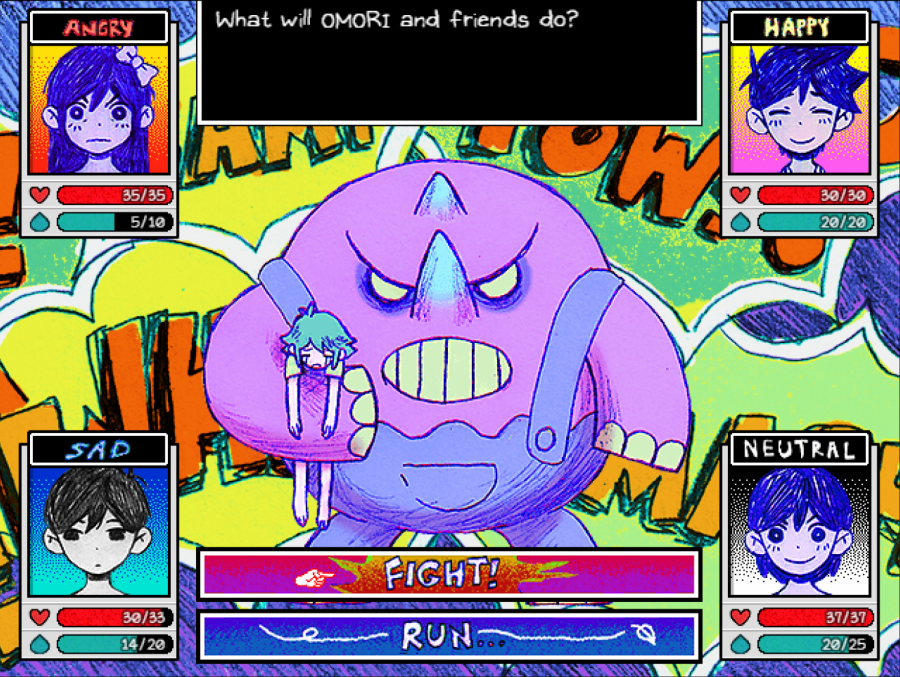 The battle system is turn-based, harkening back to JRPG systems that have been used in games before. In Omori, players emotional states are used in battle to inflict status buffs and debuffs on party members and enemies. Photo credit: Image Credit: OMOCAT, LLC. and PLAYISM

Omori is one of the most captivating games I’ve ever had the pleasure of playing. In my 30 hours spent in its world, I had to keep reminding myself that this RPG (that’s primarily set in a cutesy dream world) is a horror game.

There are shockingly long periods of time where the game is not flaunting its horror aspects. There are lighthearted story beats and quests that are genuinely funny and entertaining. It allows you to get comfortable and immerse yourself in it’s simple (yet fun) turn-based combat system and connect with the beautifully written characters that it presents to you.

When the game decides to dive into its darker themes, however, it reminds the player that they’re playing a psychological horror game and that’s when it truly shines.

A horror game with a cute art style is nothing new, but what sets Omori apart from games that share the same space it inhabits is the way that the game tackles its themes of depression, anxiety, and suicide. It presents these themes in a way that’s tasteful yet doesn’t hold back from showing the harsh effects that they can have on an individual.

It was also terrifying.

It’s incredible to think that this was all successfully pulled off in an indie title that was funded on Kickstarter.

Omori was developed by a small team led by OMOCAT, an artist who has been devoted to completing the game ever since it first emerged on Kickstarter in late 2014, where the project was funded.

OMOCAT and her team were originally aiming to release the game in early 2015, but a long development cycle led to many doubting whether the game was canceled. Countless posts were made online by fans, who questioned if the game would ever be released.

As a result, when the game released on December 25th in 2020 (nearly 6 years since its initial announcement), many were in shock. Many were surprised, while others had built up high expectations for the project that they expected it to live up to.

One only must look at the reviews for the game on its Steam page to see its overwhelmingly positive reception. The game has proven to be a huge hit, and its fanbase is steadily growing.

My time with the game had me going through such an insane roller coaster ride of emotions. I laughed quite a bit, and there were also moments where I had to pause the game due to the game putting me through a downright chilling section.

Through it all, I knew I was experiencing something special. Omori is available now on Steam, and there are plans to port the title to consoles in the future. It’s a title you absolutely should experience.