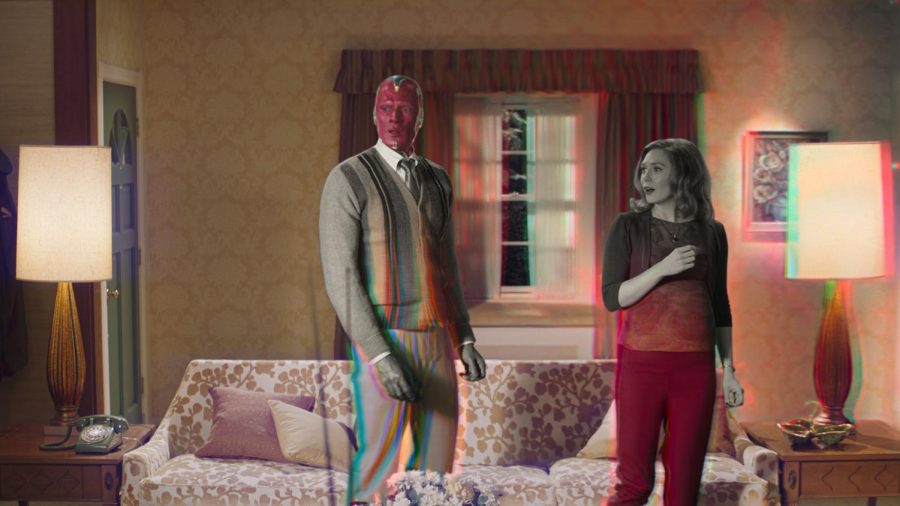 In Episode two of “WandaVision”, the setting shifts to the 60’s, meaning that time is moving faster and each episode will revolve around different decades of sitcoms.

With how good the last one turned out, many questions were raised about what episode two brings to the table. I could say that it brought an eerie nature to everything and a lot of dark and mysterious elements to the show.

The opening of this episode is animated, much akin to how most shows of this era would have an animated intro highlighting the characters. It’s also a nod to the popular sitcom of the 60’s, “Bewitched.”

The unusual couple, portrayed by Elizabeth Olsen and Paul Bettany, gets woken up by a mysterious noise outside which later turns out to be a bunch of tree branches hitting the window. The next day is practicing for the neighborhood talent show by performing a magic act.

Later on, while Vision heads to the library to attend a neighborhood watch meeting, Wanda heads out with Agatha, their neighbor that brought some food for Wanda’s last episode, to the planning committee for the show led by Dottie (Emma Caulfield), a skeptical mom who runs the town and is technically the one who thinks she’s in charge of everything that happens in Westview.

Before that, however, she spots a toy helicopter, which unlike everything else is colored red and yellow with a sword symbol on it.

Vision meets with the members bonding with each other, with one of them giving Vision some gum that gets stuck in his gears, making him act drunk.

While on the planning committee, Wanda meets another new neighbor Geraldine (Teyonah Parris), and later on, has a one-to-one talk with Dottie.

However, their conversation was cut short when the nearby radio began to glitch. The audience hears the voice of Jimmy Woo (Randall Park), an FBI agent from the movie “Ant-Man and the Wasp” who is now working for S.W.O.R.D.

He tries to contact Wanda asking who is doing this to her. Seconds later, the radio breaks and the glass Dottie was holding shatters, cutting her hand.

Afterward, it cuts to the talent show with Wanda and Vision being the last act of the show. Chaos ensues as Vision uses his powers but Wanda uses her to make it seem that it was faked. In the end, they win the talent show and come back home with Wanda being pregnant.

Their moment was cut short as the noise from last night returns. Both of them head outside when a beekeeper comes out of a sewer hole with the S.W.O.R.D symbol on their back.

Not wanting her perfect reality to end, Wanda appears to reset the timeline, altering her reality from black and white to color, changing the era to the late ‘60s or early ‘70s.

The episode then ends with Woo again asking “Who’s doing this to you, Wanda?”

In terms of plot, it’s getting very interesting to see that this world seems like another reality controlled by Wanda with how she reverts back to the house. It’s like she doesn’t want anything to happen to her world that she seemingly created. There are more questions than answers but so far is intriguing too see.

Again, the best parts of the first episode are back for this episode, with the environment and costumes still looking good to see.

For those who are getting tired of the black and white ‘50s-60’s looks, thankfully the next one will be in color making sure to add in elements from the 70’s sitcoms in it to keep it fresh and ongoing.

The characters did their best as well, adding to their roles in this town that seems like a reality controlled entirely by Wanda herself. Although it looks like she’s in control of everything, there may be another person in control as well

Overall, the episode showed more of this world and the secrets that this town holds with people coming in and out mysteriously.

The second episode of “WandaVision” gets ★★★★☆ being a fantastic episode that builds upon the foundation of the first episode, while leaving many fans curious as to what’s happening and who those people with the sword symbols are.