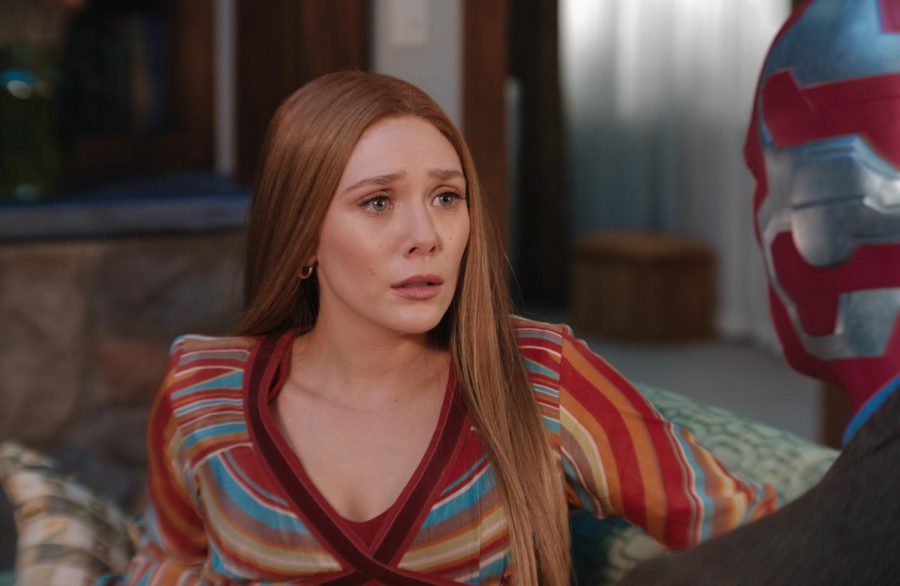 This week’s episode of “WandaVision” gives audiences a much more noticeable comedic tone compared to previous episodes. Both hilarious and creative, the showrunners managed to give off the 70’s style vibe to the audience

The opening of this episode is based on 70’s style sitcoms like “The Brady Bunch,” “Three’s Company” and the “Partridge Family”.

Following the previous episode, Wanda becomes suddenly pregnant. The next day, now in color, Dr. Neilson comes over to check on the couple and examine the baby. Neilson concludes that the baby is four months developed and is perfectly healthy before he heads out and takes a vacation with his wife.

Awhile later, Vision is beginning to think that something is wrong, knowing things have been acting strange and time is moving forward. Before he has time to explain, however, Wanda resets the conversation to the beginning, effectively changing the story.

It then cuts to a commercial about Hydra Soap. Hydra is one of the main enemies of the Avengers and is the group responsible for giving Wanda her powers through the Mind Stone.

After the commercial, Wanda starts to feel that the baby is arriving with Vision rushing to get Dr. Neilson. Wanda tries to calm down and control her powers, but Geraldine intervenes and asks for a bucket while telling her a story about how she got a promotion.

Geraldine helps Wanda give birth. After a while, they successfully deliver two babies, with Vision and Wanda naming them Billy and Tommy.

After that is done, Vision goes to walk the doctor out when he sees Agnes and Herb gossiping outside, talking about Geraldine.

Back inside Wanda sings a Slokovian song to her children, mentioning her brother. When Geraldine asks about him, Wanda says Ultron was the one that killed him.

Wanda gets defensive and notices the sword emblem on her necklace, not wanting S.W.O.R.D to ruin her reality. She sends Geraldine out of her reality and into the real world where she is safely found by the organization.

After viewing the episode it does lean more forward to a comedic approach but that’s how every sitcom is. It would have been nice to use more of the serious aspects of sitcoms.

There is a bigger, deeper meaning to the overarching plot but it doesnt seem to have been included in this episode.

The comedy was well done as there were a lot of jokes that got a laugh out of the audience and the jokes were a home run all the way.

The way they introduce the children is accurate to how it is in the comics, with it teasing a bunch of characters that may be introduced in the future.

The acting was well done, as we see Olsen take her character in a direction that is almost a more antagonistic role, letting the audience know that something isn’t right with her.

Overall, this was a pretty eventful episode, adding two new faces in the MCU. With the 70’s gone and the 80’s coming soon, it’s no secret that more and more of the mystery is soon to be revealed.

“Now in Color” gets a 5 out of 5 stars. It’s a really funny and heart-warming episode with many laughs and secrets soon to follow.