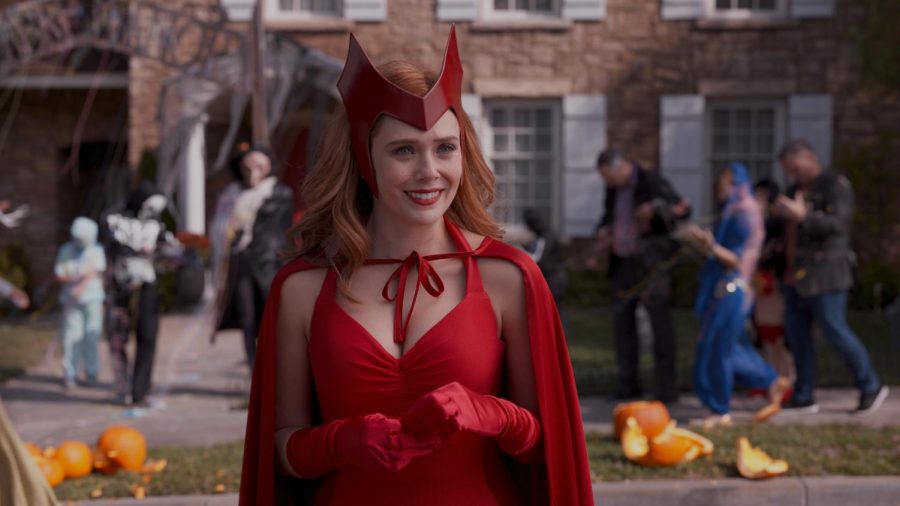 Another week, another exciting continuation of “WandaVision” with this week’s episode being a Halloween special of sorts.

This episode gave us a terrifying tale full of suspenseful events, along with an impactful cliffhanger to excite viewers.

Let’s start with the plot, as now the “sitcom” has moved into the 90’s era. The opening of the episode is a reference to “Malcolm in the Middle”.

It starts with the Maximoffs getting ready to go trick or treating. Vision decides to not go and instead is needed for the Neighborhood Watch.

The costumes that the cast are wearing are callbacks to what they wore in the comics.

Wanda doesn’t like that he’s skipping the kids first Halloween but Pietro says that he’ll take good care of the boys, getting them their costumes with the help of his super speed.

Back at S.W.O.R.D HQ, Monica and Darcy Lewis argue and call out Director Hayward for trying to fire an armed drone at Wanda. He reveals to them that he detests superheroes and plans to kill Wanda to end this situation.

Monica explains that killing Wanda may not fix what’s happening with Westview but Hayward doesn’t listen and instead kicks not only Monica but Darcy and Jimmy Woo out of the mission.

Before they get out of the base, Monica and Jimmy take out and hide the guards, taking their clothes and heading to a bunker to keep low.

Inside the city, the siblings and the kids go trick or treating, with Pietro going with them to the houses while Wanda goes to find out what Vision is doing on patrol.

Herb explains that Vision is not on the patrol team and instead of wandering around the city. He notices a woman repeating motions with a tear streaming down her cheek. Confused and worried, he continues forward.

The episode cuts to a commercial with a starving boy on an island. Out of nowhere a talking shark comes out of the water and gives the kid a Yogurt called Yo-Magic. The boys try to open the yogurt but to no avail. It results in the boy dying.

After the commercial, it cuts back to the family with the kids heading forward to do more trick or treating while Wanda and Pietro talking, interrogating each other.

It then cuts to the base with Monica, Jimmy, and Darcy setting up camp and checking what’s happening with Vision.

Vision then gets to the farther part of town with people staying still and crying. He then sees Agnes in her car not moving but still talking. He awakens her and explains to him that he is an Avenger and that nobody can get out of the city. He doesn’t know what an Avenger is and makes her “normal,” before heading to the border to see the outside world.

After that Monica and Jimmy head outside to meet with the aerospace engineer that can help her get back in. Darcy stays behind to check up on Vision.

At the festival, Wanda and Pietro continue to talk, resulting in Wanda seeing a dead Pietro.

Back with Vision he makes it to the border and successfully gets out of the rift but is slowly decaying.

Billy hears his father in pain and heads back with his mom along with Tommy, explaining to her that his dad is dying. Wanda quickly moves the rift more to get Vision back but actively spreads all through the base of S.W.O.R.D making every agent along with Darcy get sucked in.

The only people to not be affected are Director Hayward, Monica, and Jimmy Woo.

We’ve yet to know who the villain really is.

The tension and atmosphere is more chaotic in this episode and it’s accurate considering that it’s Halloween in the episode.

It’s great to see Evan Peters back as Pietro even though it isn’t the same Quicksilver.

His acting is great as well, playing the lazy sibling and cool uncle like it is in most sitcoms.

Wanda also gets a lot of character development as the audience is seeing just how broken she is and how much grief she must be in.

This is another great episode that gives great tension, character dynamics and moves the plot forward towards what must be something big happening.

“All-New Halloween Spectacular” gets a four and a half out of five stars. An outstanding episode and this series just keeps on getting better.