‘WandaVision’ ‘The Series Finale’: Climactic ending and looking into the future 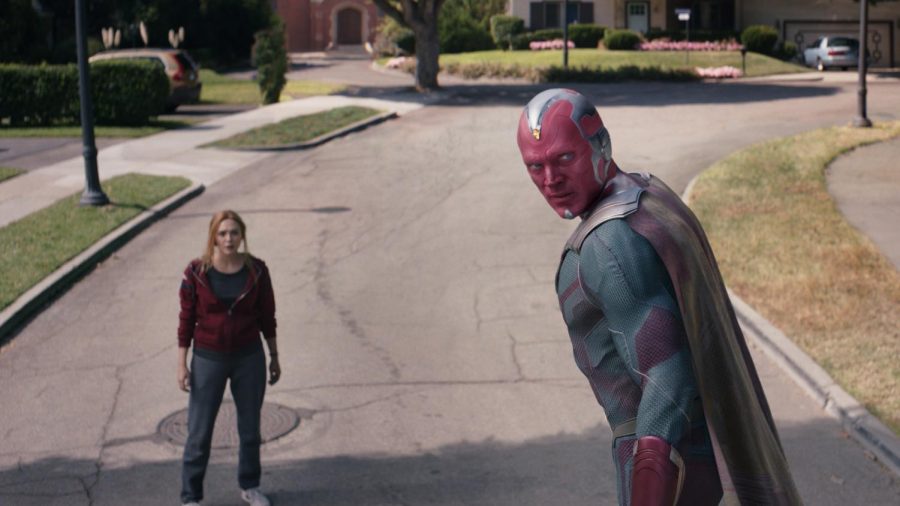 “WandaVision” just finished their ninth and final episode, with it giving fans a phenomenal conclusion that gives fans excitement for the future of the MCU.

The plot starts off with Agatha trying to take Wanda’s chaos magic, but before she can, White Vision appears.

Wanda thinks that it was the original Vision but instead of a heartfelt moment, he tries to crush her head, but the made-up Vision intervenes.

Both Vision’s continue to fight all over the city and the air. Meanwhile, Agatha and Wanda continue their battle with the evil witch freeing the residents of Westview from Wanda’s control.

They tell Wanda about the grief she caused them, begging to be let out, causing Wanda to open the portal for them to leave. However, she quickly closes it after both Vision and her kids start to fade away.

Outside of the barrier, Hayward and a group of agents get inside the city in hopes of killing Wanda, while Monica frees the fake Pietro who is actually a resident of Westview named Ralph Bohner.

She then works with the twins to stop S.W.O.R.D agents from firing at them.

While that’s happening, both Visions continue to fight, but during the middle of their conversation the new Vision was able to restore the memories of the White Vision who leaves to think about the revived memories.

During the witch fight, Wanda gives her magic to Agatha who ultimately drains her of her power and tries to kill Wanda but realizes that she can’t use magic. Wanda summons magical barriers to prevent her from using any kind of magic.

Once Wanda sets the barrier she takes back her magic, including Agatha’s, transforming her costume and appearance into The Scarlet Witch.

Before leaving her, Wanda turns Agatha into “Agne” making her life out as a sitcom character until she is needed again.

The Maximoff family goes back to their home staying together as a family one last time before fixing the town the way it was erasing Billy, Tommy and Vision.

She then leaves Westview and goes into hiding.

In a mid-credits scene, Monica meets a Skrull who tells her that a friend of her mom wants to meet her.

In the post-credits scene, Wanda is staying in a barn reading the Darkhold in her astral form studying its knowledge before she hears the cries for help of her twin boys.

The plot was great although many would find it disappointing that not a lot of things that people are still asking questions to aren’t there and its a good explanation for it since this show was supposed to tie into “Doctor Strange in the Multiverse of Madness.”

Wanda’s character development from the first episode to now was incredible and a great way to give more to a character in this style rather than in film.

The story was excellent and the fight was great to see again after years of no MCU action.

The acting was great with both Elizabeth Olsen and Paul Bettany having a great chemistry with their characters making them feel like they actually belong together.

The CGI was good with the magic particles and lasers looking cool and energetic, not bad from a show with a lower budget than a movie.

The cinematography was good as well, with the camera being moved around in some amazing looking shots.

Overall the final episode was an exciting conclusion and a great character development to Wanda, with the future of the Scarlet Witch being undetermined in the future of the MCU, that is until the next Doctor Strange film of course.

‘”Series Finale” gets a four out of five a great ending and a great introduction to Phase Four of the Marvel Cinematic Universe.