‘Crash Bandicoot 4: It’s About Time’ (Switch): A good looking collectathon on the go 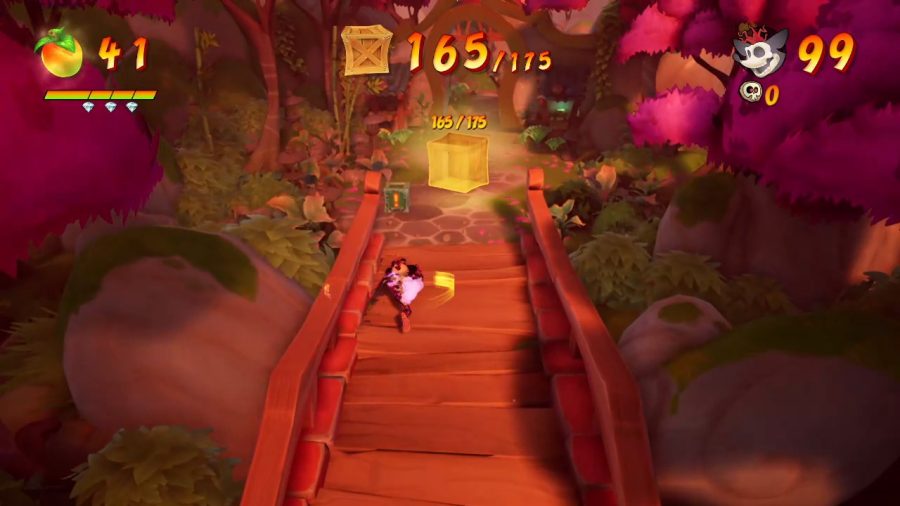 One of the more difficult collectibles that the game has is the N. sanely perfect relics, which you get for beating the level without dying. Be prepared to restart alot cause it's required for 106% completion. Photo credit: Oscar Torres

Even though many were upset that Crash 4 wasn’t released on Switch a year ago, Activision decided to finally release it alongside the PS5 and Series X version.

What we got is a platformer that not only looks good on a portable console but plays just as good too.

Crash 4 takes place years after the events of the third game with the defeat of Dr. Cortex and N. Tropy. They break out of time prison and enact a plan to rule time and space.

Meanwhile, Crash heads to a temple and meets a time mask name Lani-Lol. Realizing that the multiverse is in trouble, he asks Crash and Coco to help him find his siblings and restore the Multiverse before Cortex and N. Tropy changes and rules all of time and space.

Along the way, they’ll meet the Multiverse versions of Tana and Dingodile who’ll assist them in stopping the two evil scientists.

Without spoiling it, the story is both charming and great, with a callback to the original games being cute. The jokes are well done and sparked a few chuckles.

The gameplay is just like normal Crash Bandicoot where you run and jump in different levels breaking boxes and collecting Wumpa fruits in order to get a gem at the end. You play as Crash and Coco, both play the same, so choose your favorite.

There are two options: Modern or Retro. Modern is unlimited lives, while retro has limited lives. Lose them all and players have to restart the level. Thankfully lives are easy to get so retro is a safe choice as well.

Players can also play as Cortex, Dingodile and Tana. All three play differently so there is a lot of variety that people can choose from.

This time there are six gems in a level requiring the player to not only break every box in the stage but to do it while collecting enough fruits for three gems, making it to the end without dying more than three times and finding a hidden gem.

This is good cause you can either do it in one go or get a specific gem the first time and come back to get the remaining gems. Players don’t have to do it in one go.

However N.sane perfect relics require players to break every box without dying, which adds to the difficulty but can be fun and rewarding to some players.

The masks are a brand new mechanic, with four different masks doing something unique, one example being phasing objects in and out of existence.

A few levels have tapes to can collect that unlock levels that take place before the events of the first game. Players have to get it without dying.

The difficulty of this game is getting 100% but it’s fun to try to get, and with each death, you learn from the mistakes and try again so there isn’t any rage moments from it.

The visuals are good, though not as beautiful looking as PS5 or PS4 Pro versions, it still impressive that it looks as good as them on a portable console. They made the visuals more like how a cartoon would look and it fits the visuals since Crash does look like one.

Framerate is 30 frames as opposed to 60 fps for PS5. While this might seems like a bad decision the game still works and plays well in 30 considering the N.Sane Trilogy was also 30 frames per second.

Overall the game is impressive on Switch with the gameplay, Crash and visuals looking impressive and fun to play all the time.

“Crash 4: It’s About Time” gets a four out of five a great game to add to players Switch collection.