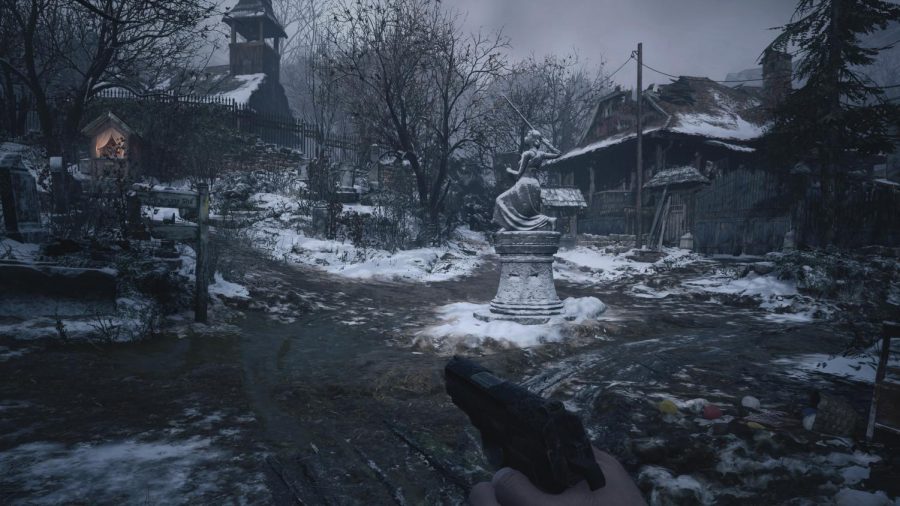 When players are thrust into the game world, this is one of the first areas that they will see. It's fully explorable, with a ton to see it it's many areas. Photo credit: Capcom Unity/Capcom, Co., Ltd.

The demo is unique, as it gives players a strict 30-minute time limit to adhere to. Once your 30 minutes are up, the demo is no longer playable. Developer Capcom has used this marketing tactic before, with 2019’s Resident Evil 2 One-Shot demo.

The demo, despite its relatively short run time, packs in a ton of content for fans of the series.

Set in the Village portion of the game, (a separate demo within the castle will be releasing on the 25th of April) players control Ethan Winters as he searches for his daughter.

The village itself instantly transported me back to the village that was present in Resident Evil 4. It feels as if much of that game’s DNA is present in this new title, to be frank.

That’s not a bad thing, quite the opposite in fact. RE4 was the peak of the series for many fans, and it’s comforting to see Capcom embracing this and going back to what worked.

Although not present in the demo itself, players can upgrade weapons and sell items when at a merchant, which was a system that was originally introduced in RE4.

Visually speaking, the demo looked beautiful. It runs at a steady 4K at 60FPS when ray tracing is turned off, and at about 45FPS when it’s bumped on. This is, of course, only an option on the newer hardware, like PS5, Xbox Series X, and PC.

Players get a taste of how exploration and crafting will function in Village as well. Strewn around the village are resources that allow players to craft an extra first aid kit or some much-needed ammunition.

Speaking of ammunition, combat has been refined and is present in the demo as well. In a particularly tense sequence, players find themselves in a field of sorts where they see lycanthropes stumbling about.

Following this sequence, where players have the option to engage or sneak by, they meet with residents of the village.

What really stands out in the demo is how much it highlighted the character interactions that will (presumably) be present in the title.

Resident Evil is, of course, a survival horror game first and an action game second. While Resident Evil: biohazard excelled in the horror, Village seems to excel in the action.

Despite holding some genuinely tense moments in its short 30 minute run time, I never really felt “scared”. It was a ton of fun, but I did not feel genuine fear at all.

Despite these shortcomings, I enjoyed my time with the demo. There’s sure to be more to comb through when Capcom releases their next demo, but Village has made a great first impression.

Resident Evil Village will be released on PS4, PS5, Xbox One, Xbox Series X, and PC on May 7th.